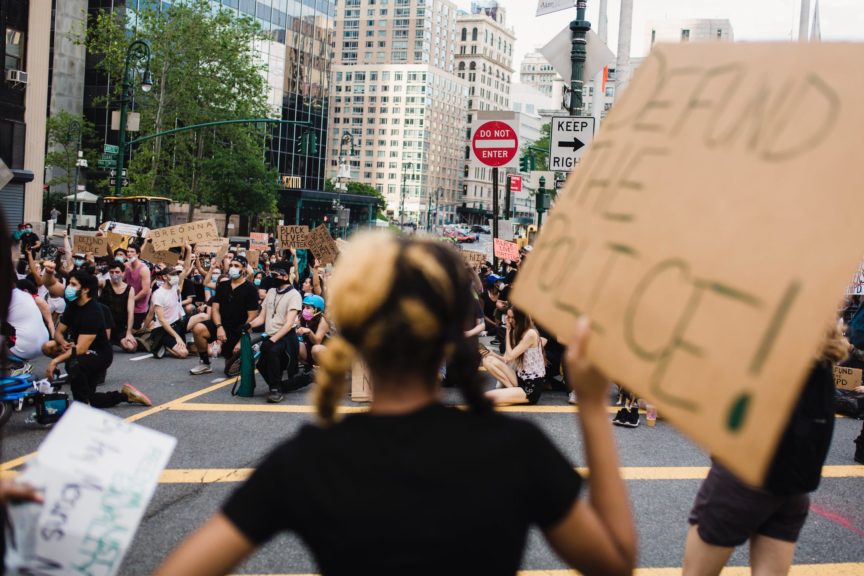 ‘Defund the police’ has emerged as a central demand amid a spectacular eruption of collective action against lethal police violence in the United States. As UK Black Lives Matter activists take inspiration, questions are being asked about how this demand – forged in the long history of the US prison abolition movement – can gain purchase in Britain.

It is easy to point to differences between US and UK policing. Police departments on alternate sides of the Atlantic vary in their financial autonomy, in the scale of their militarisation, and in the particularities of their involvement in colonial domination.

However, it is important to understand that the core function of the police is the same in both countries: to maintain a disciplinary, capitalist and racially stratified society. It is important, too, to dispel the illusion, common in white middle-class society, that the British police are largely unarmed and govern by consent.

The challenges facing those who seek radical social transformation are also similar: how can we make demands of the police and prison systems without becoming entangled in drawn-out, tried and failed reform strategies that ultimately restabilise the carceral system’s appearance of legitimacy?

With the current protests spreading, there is an opportunity now to formulate demands that don’t just mechanically transplant principles from the US context. We must draw on the inspiring traditions of resistance here in the UK to address the specificities of our history, institutions, and public consciousness.

There are many possible abolitionist demands. A key task of the current moment is for people to come together, agree upon our priorities and mobilise our movement around them.

As the government threatens to fast-track legal action against Black Lives Matter (BLM) protesters, a call for no prosecutions for protesters would connect popular support for BLM with attention to the police’s role in suppressing emancipatory social movements.

As public anger about austerity has risen, the police have sought to present themselves as a public service suffering from budget cuts. However, part of the reason police appear overstretched is that they are being called upon to respond to incidents and issues – such as rough-sleeping, mental health crises, drug and alcohol-related problems, domestic violence, issues relating to Covid-19 – that could be far more effectively and humanely addressed by well-funded, community-based emergency support teams, crisis intervention and violence de-escalation workers.

At the same time, demands to strip police of their most oppressive units, functions and powers can highlight the harmful uses to which they put most of the resources they do have.

To this end, ‘defund the police’ might have its most direct translation in calls to stop the planned expansion of police budgets and recruitment of police officers, to disarm police of their guns and tasers, to remove stop and search and strip search powers and to abolish units such as the Territorial Support Group, which exist only to quell social unrest and dissent.

Refocusing on the demands to decriminalise drugs, sex work, migration, poverty, and protest would take away the police’s cover for their targetted harassment of oppressed groups. This might look like putting an end to drugs policing and repealing the public order legislation routinely used to suppress dissent, hostile environment legislation, and laws that criminalise homelessness and protect corporate property.

Increasing public awareness of undercover policing, as a result of the ongoing spycops inquiry, and of big data, following the Cambridge Analytica scandal, provides an opportunity to push back against mass surveillance and wrest control of data from corporations and the state.

We could start with demands to firewall data held by health, education and other public services from police counter-terrorism and immigration enforcement, to end individual and place-based risk profiling (such as the domestic extremismdatabase and the notoriously racist gangs matrix, predictive algorithms used by police and credit scoring) and to ban the use of facial and gait recognition technology.

Responding to a spate of policies that enforce the collusion of public and private organisations – from universities to job centres to employers – in the work of policing, we should mobilise a campaign of disentanglement, urging institutions to examine and extricate themselves from their involvement in policing. A demand like this might connect resistance to covert policing under the rubric of ‘care’, such as Prevent duties, with, for example, ‘ban the box’, cops off campus and anti hostile environment campaigns.

Building on the current reckoning with Britain’s colonial identity, we need to address Britain’s leading role in global policing. We should demand an end to the export of arms and policing technologies and ‘expertise’, to the use of development aid to fund policing and border enforcement overseas, and to cooperation with, for example, Hong Kong, Bahraini, and US regimes.

Given that we are witnessing the unnecessary deaths of tens of thousands of people, the demands for Covid Justice need to be connected to long-standing calls for justice for those who have suffered and died at the hands of the state or through state abandonment, in ‘custody’, at Grenfell and in the Windrush Scandal. Abolitionist movements could support demands for meaningful processes of state accountability and reparation organised under the direction of those affected.

Crucial to these accountability campaigns is the ability for people to be supported while fighting through the courts. Without propagating the myth of justice by the ‘rule of law’, we need to mobilise against the ways in which the destruction of legal aid in 2010 has strengthened the state’s immunity from challenge. This means that demands for fully accessible and properly funded legal aid for judicial reviews, actions against the police, and criminal cases are as urgent as ever.

Finally, abolitionist politics might gain traction with popular anti-austerity movements by mobilising around demands for investment in proven community-led public health responses to violence, drug-related harm, and mental health and other social crises, as has been seen in Minneapolis and to some extent in Glasgow. In doing so, we need to remain vigilant about the ways that notions of ‘public’, ‘health’ and ‘community’ can so often be reabsorbed and rerouted into new forms of social control.

Abolitionists in the UK are not starting from scratch.

While the politics of police abolition are capturing the attention and imagination of many UK activists for the first time, we are not starting from scratch.

UK abolitionists are already working to limit the expansion and power of the criminal punishment system by organising communities around the UK to stop the building of new prisons, to close detention centres, end Joint Enterprise and IPP, and transform carceral infrastructure into women-focused community resources and affordable housing.  They are working in prisoner solidarity groups and abolitionist consciousness-raising projects.

The United Friends and Families campaign and INQUEST have been fighting for decades to hold officials and institutions accountable for state-inflicted deaths. The Hillsborough, Orgreave Truth & Justice, and Police Spies Out of Lives campaigns work to expose and remedy historic injustices, while organisations like 4Front,StopWatch, NetPol, Northern Police Monitoring Project, Green and Black Cross, and Account Hackney challenge these abuses in the present, laying bare the police’s role in enforcing unjust hierarchies of race and class.

Resistance to the current system is also manifest through direct confrontations with the police, such as in the widespread anti-police riots in August 2011 as well as more recent prison riots, the burning down of a police firearms training building in Bristol in 2013, on-the-ground solidarity with Travellers (one of the most heavily policed social groups in the UK) resisting violent evictions, direct actions against deportations, and local residents spontaneously uniting to block immigration raids.

Underlying these flashpoints of dissent are everyday cultures of non-compliance with unjust authorities, like when teenagers being stopped and searched talk back to cops, film the confrontation and share it on the internet. Artists like Kano and Awate give visceral and popular expression to these feelings and experiences.

Yesterday, my parents were stopped and questioned in their own driveway for “driving a motor vehicle on the road”, and “because they can”.
It’s suspicious to walk from your car to your house, while black. The UK is not innocent.

64K people are talking about this

Mainstream campaigns for comprehensive legal aid can have an abolitionist edge insofar as they make a material difference to the ability of people to challenge police violence, resist criminalisation, and push back against repressive legislation.

So too can ban the box campaigns, which challenge discrimination against people with criminal records in employment, education, and housing. Projects like Blue Bag Life, Our Empty Chair, and Detained Voices similarly work to undo the stigma of slur terms like ‘criminal’ and ‘illegal’ that uphold carceral systems by preventing those most affected by them from being listened to.

From defunding the police to abolishing the carceral state of things

As abolitionist demands are mobilised against the state, it is important to resist reliance on NGO forms to carry a movement whose power lies in popular mobilisation and the leadership of Black, queer, working-class and youth activism.

We must recognise and support everyday resistance to police governance – on street corners, in schools, in cells – as part of our collective political action and be clear that bystander silence is a part of police violence.

Of course, reducing the power of police is but one part of the abolitionist project. That project is equally about building institutions and practices and transformingsociety to prevent and address the harms that police are said to be necessary to deal with, but in fact further entrench.

Dismantling policing is not an optional extra when it comes to overcoming the injustices of the present. Abolition needs to be taken up by all our social movements – from anti-sexual-harassment campaigns to housing justice, migrant rights, and environmentalist projects – by rejecting criminalisation as a means of social change and committing to build a social infrastructure in which no one is disposable.