Yesterday 2.750 tons of ammonium nitrate stored in a warehouse at the port of Beirut, Lebanon, exploded. The blast killed more than 100 people and wounded more than 4,000. Many buildings in Beirut were severely damaged. The pressure wave broke windows as far 10 miles away. Beirut’s port is mostly destroyed. Lebanon’s national grain reserve, stored in grain silos next to the explosion, is gone.

This comes on top of an economic and currency meltdown in Lebanon and during a exponential growth phase of the Coronovirus epidemic.

In 2013 Lebanese authorities arrested a ship (pdf) that had been abandoned by its owner:

En route, the vessel faced technical problems forcing the Master to enter Beirut Port. Upon inspection of the vessel by Port State Control, the vessel was forbidden from sailing. Most crew except the Master and four crew members were repatriated and shortly afterwards the vessel was abandoned by her owners after charterers and cargo concern lost interest in the cargo. The vessel quickly ran out of stores, bunker and provisions.
…
Owing to the risks associated with retaining the Ammonium Nitrate on board the vessel, the port authorities discharged the cargo onto the port’s warehouses. The vessel and cargo remain to date in port awaiting auctioning and/or proper disposal.

The ammonium nitrate was stored in a quayside warehouse. The picture shows the 1,000 kilogram big bags labeled “Nitroprill HD” in bad storage conditions at the ‘Hanger 12’ warehouse in Beirut.

“Nitroprill HD” is a knock-off product of the trademarked Nitropril, a premium grade porous prilled ammonium nitrate manufactured and sold by the Orica Mining Services in Australia. It is used as a commercial explosive in mining and quarrying. The safety sheet of the original product says it “May explode under confinement and high temperature, but not readily detonated. May explode due to nearby detonations.”

An Orica safety assessment (pdf, Appendix III) sets the TNT (military explosive) equivalence for fire of bulk Nitropril in big bags at 15%. 2,750 tons of Nitropril are thereby the equivalent of 412.5 tons of TNT.

A video taken from the top of the grain silos next to the warehouse shows uncontrolled explosions of small fireworks within a port warehouse near to where the ammonium nitrate was stored. The small crackling fireworks explosions are followed by a very huge one. The video is consistent with other videos taken from further away. What set off the fireworks which set off the ammonium nitrate is as yet unknown but it is assumed to have been accidental (see update below).

The damage as shown in the before-after picture below is huge.

A look at the quay from the east with the crater of the explosion in front of the grain silos. The silos have protected the western part of the city from more damage. Wheat has spilled out. The grain reserves of Lebanon are down to less than a month of consumption. 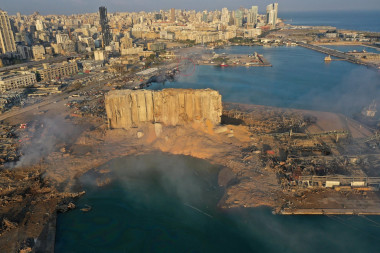 The ammonium nitrate should not have been stored in a warehouse within the city. But similar could be said of the Iranian ammunition that was stored at the Evangelos Florakis Naval Base in Cyprus. It had been seized at U.S. urging en route to Syria in January 2009. On July 11 2011 a wildfire at the base set off the ammunition. The explosion killed dozens and destroyed the main power station of the island.

An aerial video taken this morning shows the utter devastation of Beirut’s port facilities. Lebanon depends on imports. 80% of those come through Beirut port.

Pictures and videos from various correspondents in Beirut show their damaged apartments (1, 2, 3, 4). All windows are broken and glass shards are strewn all over the places. The breaking windows must have caused most of the injuries. According to the mayor of Beirut some 300.000 people have lost their homes.

The Middle East correspondent for the Independent tweeted:

My flat is completely destroyed. Not just windows blown in- like door and window frames ripped out. The cats are alive thank god.
…
Utter chaos outside St George hospital which has no electricity- medics are treating patients in the car park where the drive through COVID-19 tests were being done. It is now the ER, since the ER is destroyed. Patients screaming in agony in the background. #Beirut #Lebanon

Bel Trew’s full report of the explosion and its aftermath is here.

Syria and Iran have immediately promised aid for Lebanon. An Iranian emergency hospital is currently on its way to Beirut and is expected to open later today. Syria dispatched medical teams and is receiving patients from Beirut’s overwhelmed hospitals.

The explosion hit Beirut at a moment where the country is under U.S. sanctions and while its currency is cratering with inflation reaching 90% per month after a Ponzi scheme run by its Central Bank blew up. People who do not own foreign currency will be unable to replace their broken windows. The whole country is disintegrating.

Foreign aid from Arab and other states will now hopefully flow in and help to alleviate the suffering.

RFERL spoke with the captain of the ship that had unintentionally brought the ammonium nitrate to Lebanon. He confirms the ship’s arrest. It also reports the cause of the incident:

Lebanon’s LBCI-TV reported on August 5 that, according to preliminary information, the fire that set off the explosion was started accidentally by welders who were closing off a gap that allowed unauthorized entry into the warehouse.

LBCI said sparks from a welder’s torch are thought to have ignited fireworks stored in a warehouse, which in turn detonated the nearby cargo of ammonium nitrate that had been unloaded from the MV Rhosus years earlier.

Independent experts say orange clouds that followed the massive blast on August 4 were likely from toxic nitrogen dioxide gas that is released after an explosion involving nitrates.

The source said a fire had started at port warehouse 9 on Tuesday and spread to warehouse 12, where the ammonium nitrate was stored.

That the ammonium nitrate was stored for seven years was not the responsibility of the port management but was caused by some judicial quarrel:

The head of Beirut port and the head of customs both said on Wednesday that several letters were sent to the judiciary asking for the dangerous material be removed, but no action was taken.

Port General Manager Hassan Koraytem told OTV the material had been put in a warehouse on a court order, adding that they knew then the material was dangerous but “not to this degree”.

“We requested that it be re-exported but that did not happen. We leave it to the experts and those concerned to determine why,” Badri Daher, director general of Lebanese Customs, told broadcaster LBCI.

Two documents seen by Reuters showed Lebanese Customs had asked the judiciary in 2016 and 2017 to request that the “concerned maritime agency” re-export or approve the sale of the ammonium nitrate, which had been removed from cargo vessel Rhosus and deposited in warehouse 12, to ensure port safety.