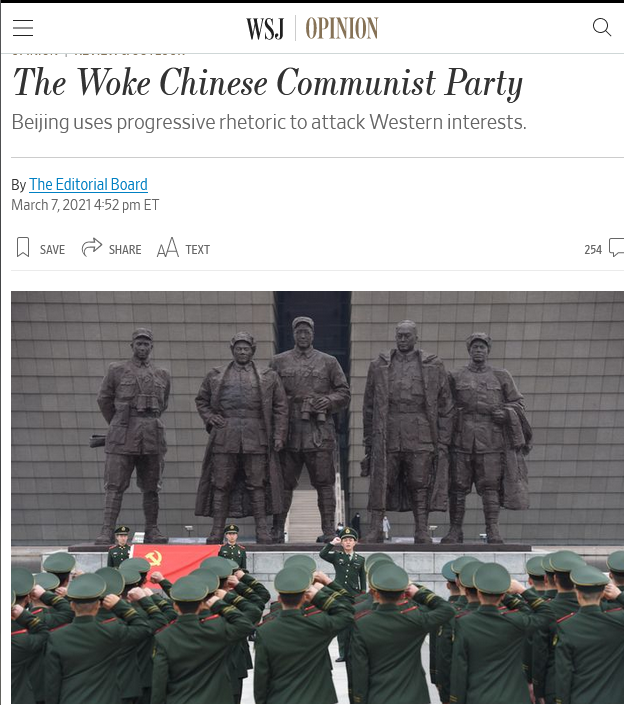 The Wall Street Journal (3/7/21) accused Chinese media of “invoking the woke themes of American progressives as a propaganda weapon against the US.”

The Wall Street Journal editorial board (3/7/21) has accused a major Chinese newspaper, and by extension the People’s Republic of China, of exploiting progressive rhetoric around racial justice to create division in the United States.

The Journal‘s target was an editorial in the Communist Party–owned newspaper Global Times (2/23/21), which complained that the US, Britain and Canada were pressuring China on human rights. The Journal editorial board accused the party paper of using “woke” language:

Note the use of “white supremacy” and “diversity” and “civilization superiority,” which come straight from the progressive critique of America as a country that is “systemically” racist and oppressive. The Global Times editors may be crude, but they’ve obviously been reading the New York Times. Their dismissal of [Sen. Tom] Cotton as racist is what you see on progressive Twitter.

The Journal suggested that the Chinese government was following the playbook of the Soviet Union, which reminded the world of the “social and antiwar turmoil of the 1960s” to turn world opinion against Washington. While implying that concerns of US racial injustice are overstated, the Murdoch-owned broadsheet said the Global Times’ “invocation of woke ideology shows they realize its threat to American confidence and purposes.”

Not only did the Wall Street Journal argue that Chinese “wokeness”—a dismissive term used to deride campaigns against racism, sexism, homophobia and xenophobia—is a danger to conservatism, it depicts it as an existential threat to the survival of the US republic—whether employed by Communists abroad or social justice activists at home. If a Chinese newspaper can support the claims made by Black Lives Matter, then somehow Black Lives Matter must be a foreign agent of a rival power, the suggestion goes.

The Journal distinguished today’s progressives from the noble civil rights activists of the early 1960s, because the latter wanted to “match American practice with its founding principles,” thus indirectly acknowledging an essential US goodness, while the former are “woke activists” who “find America fundamentally flawed,” an entitled professional elite who worry more about the “Pentagon than they do Chinese censorship.”

The latter point by the Journal is an old deflection, but it has an obvious counter-argument: A US citizen has more responsibility for and agency to change conditions at home than in a foreign power like China. And while the Journal cites repression of Tibetans and Uighur Muslims, these are hardly overlooked issues in the United States. The Free Tibet movement has long had support among celebrities (Hindustan Times, 3/21/08); concerts for Tibet were all the rage in the 1990s (Rolling Stone, 8/8/96), as it was a major cause promoted by the Beastie Boys, and the concerts featured left-wing bands like Rage Against the Machine. Ill-treatment of Tibetans has been covered in the left-wing press (The Nation, 2/26/09; Jacobin, 2/21/17; In These Times, 4/7/05). And US human rights organizations have kept a close eye on the Uigher issue. It’s not like these concerns are unheard of in the United States across the political spectrum.

But acknowledging left critics of China would undermine the Journal‘s guilt by association: If Chinese editorialists think tapping into American wokeness is a way to divide and conquer the US empire, then any American with an LGBT flag or Black Lives Matter flag is either knowingly or unknowingly doing Beijing’s bidding. 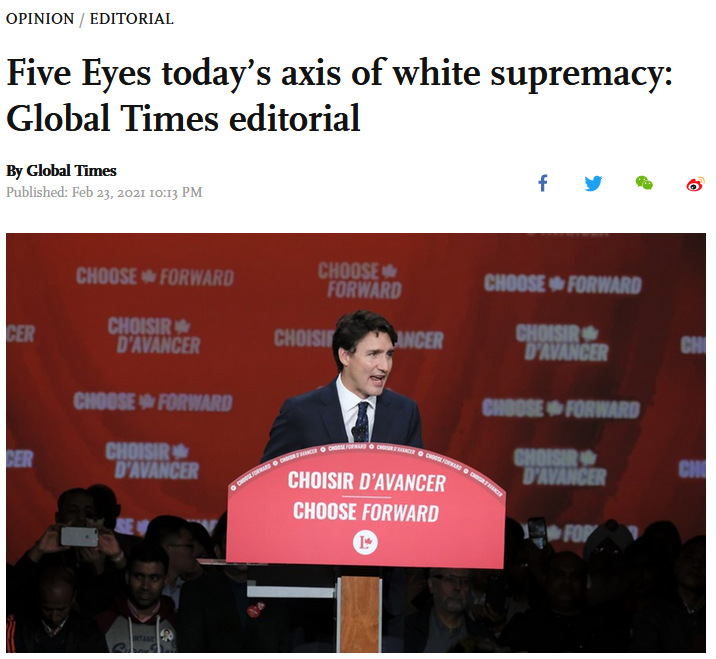 The Global Times editorial cited the rise of neo-Nazi rhetoric and organizing around the world, particularly its growth in the Trump wing of conservatism. “Hostility towards immigrant groups and non-Western countries became the realistic carrier of this white supremacy,” it said, pointing to Sen. Tom Cotton of Arkansas’s call “for 90 million Chinese Communists to be consigned ‘to the ash heap of history.’”

As FAIR.org (2/16/21) has noted, the Journal and its siblings in the Murdoch empire see the threat of wokeness coming not just from left-wing activist groups, but from the for-profit corporations that right-wing media are more accustomed to lauding. That the vanguard newspaper of the investment class sees social justice as so dangerous that it has felt the need to attack major American companies for their pro-tolerance public relations campaigns and to shine light on a Chinese newspaper with much less American readership is telling.

Certainly, one can accuse the Global Times of cheap whataboutism—the attempt to dismiss concerns about one’s own country’s human rights by citing human rights problems in other countries. But whatever one thinks about the limits to their editorial independence, Chinese media have a journalistic obligation to report on racial injustice in the United States. US hate crimes are increasing (BBC, 11/17/20), with a documented increase in anti-Asian violence (NBC, 2/12/21; Human Rights Watch, 2/12/21). The riot on Capitol Hill aimed at annulling the 2020 presidential election exposed the violent potential of far-right militia groups and conspiracy theorists.

And the Global Times is right to target Cotton. He has defended slavery (BBC, 7/27/20) and denied the existence of systemic racism (Newsweek, 2/26/21). The Arkansas ACLU office called his anti-protest bill racist. His infamous New York Times piece (6/3/20) calling for military suppression of Black Lives Matter protesters was considered so outrageous that it forced the resignation of the paper’s top opinion editor (Politico, 6/7/20).

The Wall Street Journal‘s linkage of a foreign foe to the paper’s domestic enemies is a dangerous set up—an omen that the paper will not only push for an aggressive cold war against China, but will bring that cold war home, vilifying racial and social justice activists as traitors and enemies of the state.