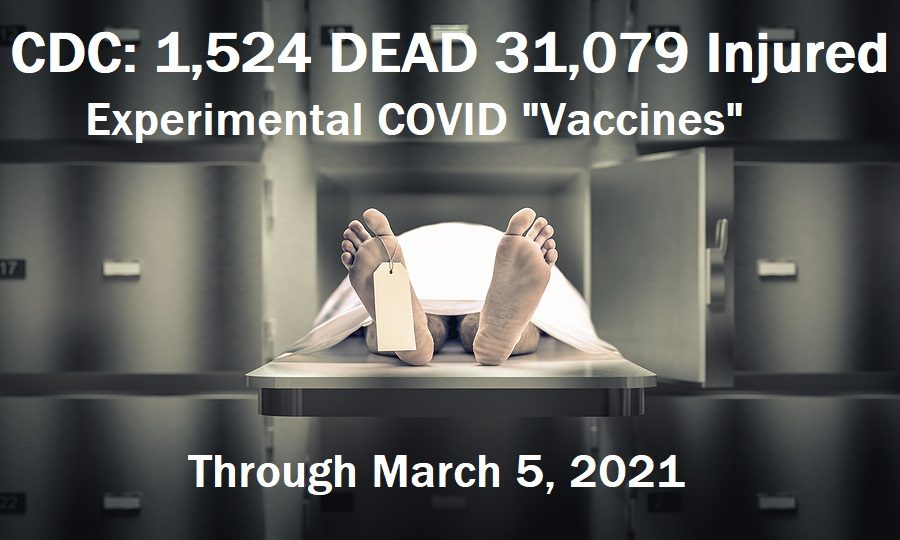 The data goes through March 5, 2021, with 31,079 recorded adverse events, including 1,524 deaths following injections of the experimental COVID mRNA shots by Pfizer and Moderna. 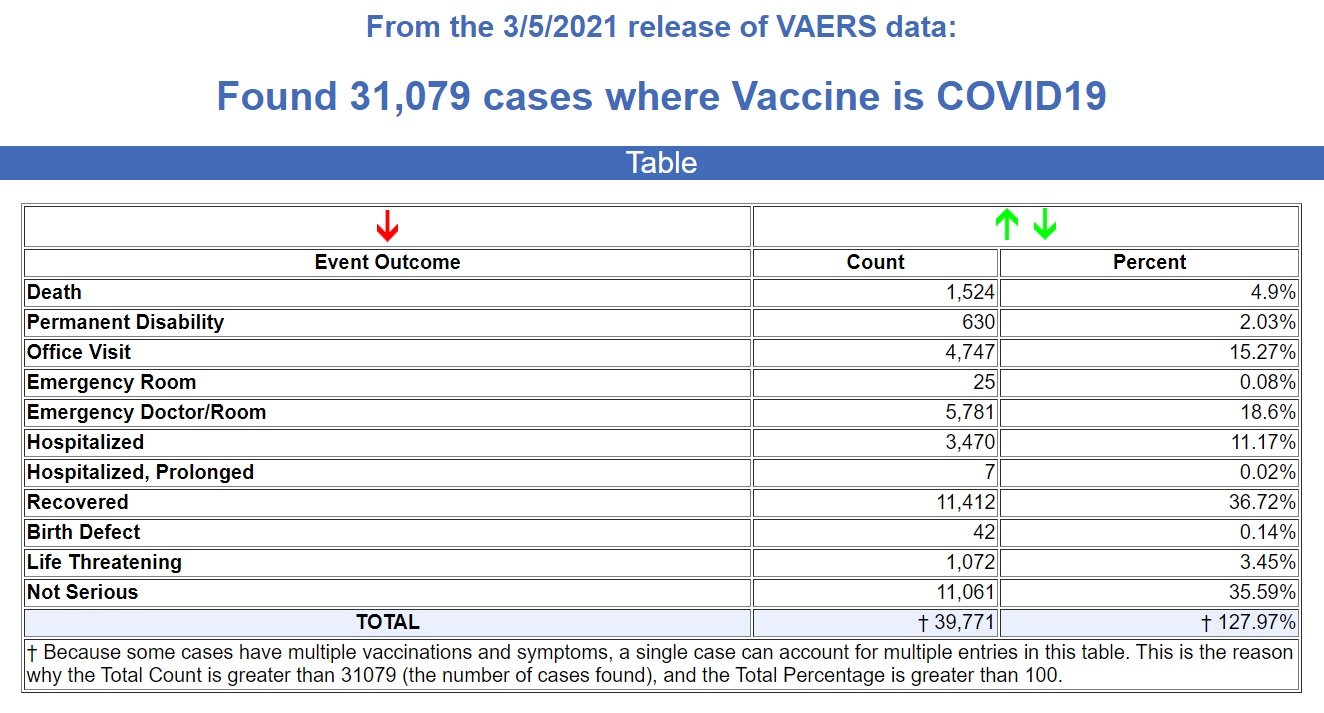 Besides the recorded 1,524 deaths, there were 5,806 visits to Emergency Room doctors, 630 permanent disabilities, and 3,477 hospitalizations.

The CDC also updated their Selected Adverse Events Reported after COVID-19 Vaccination page on March 9th this past week, and according to this report, VAERS has received 1,637 reports of death following COVID “vaccinations” – more than 100 deaths than are in the VAERS data dump released today.

The CDC continues to state that not one of these recorded deaths following experimental COVID injections are related to the shots.

A review of available clinical information including death certificates, autopsy, and medical records revealed no evidence that vaccination contributed to patient deaths. (Source.)

As we reported yesterday, many countries in Europe (and now also Thailand) have halted the vaccinating of people with the AstraZeneca experimental vaccine after reports of fatal blood clots following the injections. See:

And while the AstraZeneca COVID shots are not yet authorized for emergency use in the U.S., some have commented that the side effects for the mRNA “vaccines” currently issued EUAs in the U.S. for Pfizer and Moderna have just as many, if not more, adverse side effects, questioning whether any of these new experimental and non-FDA-approved COVID vaccines should be continued.

So we searched today’s CDC data on adverse reactions to the two COVID “vaccines” being used in the U.S. for “pulmonary embolism,” which is an “acute lung disease caused by a dislodged blood clot,” and the reason why the AstraZeneca COVID shot is now being halted in about a dozen countries worldwide after two fatalities and others injured.

The CDC is reporting 120 cases of pulmonary embolisms, including 12 DEATHS following injections of the two experimental COVID mRNA injections currently in the U.S.

This number is obviously far greater than the two deaths reported so far from pulmonary embolism following the AstraZeneca COVID shots being distributed around the world right now.

Can We Trust the CDC that NONE of These 1,637 Recorded Deaths are Caused by the Experimental COVID mRNA Shots?

The CDC has been caught many times since COVID-19 started elevating that death counts attributed to COVID by declaring that ALL deaths where there was a positive PCR test for COVID were assumed to be caused by COVID, even if the patient had pre-existing conditions, and even in some cases where the patient died due to an accident, such as a traffic accident.

Now it appears that they are doing the exact opposite, particularly with those over the age of 65 where the vast majority of recorded deaths have occurred following the experimental COVID injections, stating that pre-existing conditions are what caused the patient to die, and that in ZERO cases was the experimental COVID “vaccine” responsible.

However, there is probably a good reason why a majority of healthcare workers who work with seniors are refusing the experimental COVID shots, since they have a front row seat to see exactly how these patients react in the days and weeks following COVID injections.

One CNA (Certified Nursing Assistant) has gone public with what he has seen with the residents he has worked with, and the video of his testimony has now been viewed over 280,000 times on our Rumble Channel, and over 88,000 times on our Bitchute Channel.

One viewer offered their own observations with their mother after she received a COVID injection in the comment section on the Rumble video:

My 90 year old mother HAD beginning stages of dementia. Nothing terribly serious. She forgot things a lot, and would often tell you the same things over again whenever you talked to her.

But her mind was still pretty good for being 90. She liked to do Sudoku puzzles and Jumbles.

She had eye issues that she was dealing with for about a year. She had gotten periodic shots in her eyes this past year to help her with her eye issues. She could still see things, but maybe not as clearly as she should.

But…then she took the vaccine, when she had told me previously that she no intention of taking the vaccine. She would further state that she had never even taken a flu vaccine.

Less than 1 month later, her health has spiraled downward since then. Now her speech is slurred (as if she had a stroke–but she has not); her vision has gone down so much this past month, such that all she sees is colors and shapes; and her dementia has spiraled to the point that she thinks it’s 1935 or 1945.

She recently fell in her home and knocked over the TV and either broke or bruised her ribs–I assume because she couldn’t see, though she may be having balance issues now, as well.

Doctors are preparing to send her to a rehab facility for 3-4 weeks.

I doubt I’ll ever see her alive again–especially if she gets the second shot.

I don’t expect to be allowed to visit her in a facility in KY, which is backwards when it comes to dealing with COVID restrictions and lockdowns.

So, when I see a reasonably healthy 90 year old exhibit stroke signs (without having had a stroke), almost totally lose their vision, and begin exhibiting signs of advanced dementia all within a month period after having taken the experimental mRNA COVID Vaccine, I don’t think I can blame this all on a brown recluse spider bite or vitamin deficiency.

I only hope that this post will give you pause if you or someone elderly you know is preparing for this shot.

My one question is if you are not elderly, and are in somewhat good health and you don’t feel that you are in any danger from taking this shot, is it possible that side effects will just show up at a later time with you, perhaps when you are already sick and your health is compromised.

I mean, it’s not like my Mom had immediate side effects. Stories I have read indicate that it has often taken 3-4 weeks.

Again, no way will I ever take this shot. But I sincerely wish those getting the shot the best of luck!

Please make an effort to share your own experiences with these experimental shots. The lives of many people are now at stake, and truthful information is empowering. See:

Why Would Anyone Choose to Receive an Experimental COVID mRNA Injection?