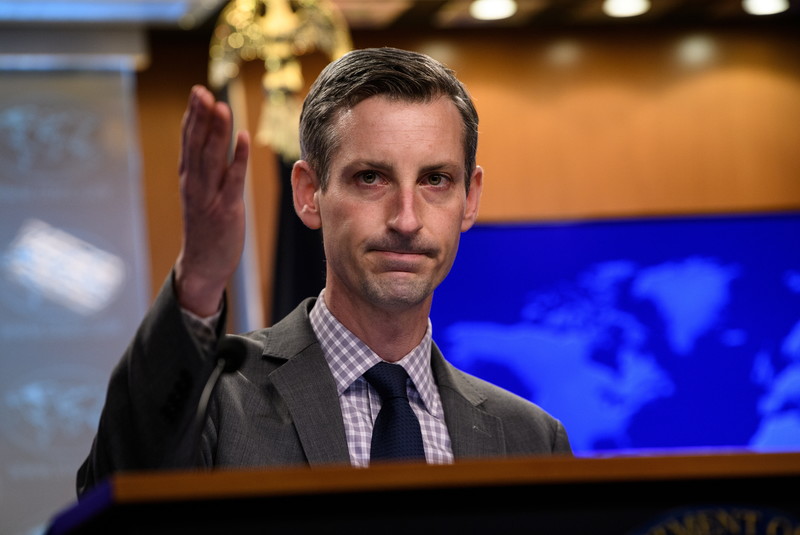 In doing so, he infuriated a portion of the party’s base – a group Biden and his advisers presumably figured would dislike President Donald Trump and his anti-Palestinian policies even more than they might have disliked Biden.

Now the Biden administration is trying to thread the needle on the Israeli occupation of Palestinian land and Syria’s Golan Heights with the State Department’s latest annual human rights report.

The Biden State Department therefore stuck with similar wording to the reports issued by the Trump administration covering 2017, 2018 and 2019, which also omit any mention of occupation from their titles.

The Golan Heights were left out of the title of the 2019 report by the Trump administration after it recognized Israel’s claimed sovereignty over the occupied territory in violation of international law.

The first report issued by the Trump administration stuck with Obama-era language in its title: “2016 Country Reports on Human Rights Practices: Israel and The Occupied Territories.”

In a briefing to journalists on Tuesday, State Department official Lisa Peterson implied that the wording adopted by Trump and maintained under Biden more clearly describes the area under discussion.

Peterson maintained, “We have presented the section as we have stated in previous years. This Human Rights Report refers to the commonly used geographic names of the area the report covers. So Israel, West Bank, and Gaza.”

She added, “Those geographic indicators are not meant to convey any position on any final status issues that need to be negotiated between the parties to the conflict.”

But this fails to acknowledge the occupied territories’ standing under international law and suggests a division between the West Bank and Gaza Strip – which have always been considered a single unit in international legal terms.

Recognizing the reality of occupation, moreover, means recognizing that Israel has no sovereignty over these territories and that the Palestinians living in them enjoy essential international protections, including the Fourth Geneva Convention.

The real year to check for a change will be next year, much as the Trump administration stuck with its predecessor’s language in its first months in office.

Indications on 30 March were not promising.

But by the next day, State Department spokesperson Ned Price tried to clear away Peterson’s word salad.

He stated that “it is a historical fact that Israel occupied the West Bank, Gaza and the Golan Heights after the 1967 war.”

Price added that the 2020 human rights report “does use the term ‘occupation’ in the context of the current status of the West Bank.”

He noted that “this has been the longstanding position of previous administrations of both parties over the course of many decades.”

On 1 April, Price elaborated further: “Do we think that the West Bank is occupied? Yes.”

Indeed the text of the 2020 human rights report does show a somewhat greater willingness to grapple with the reality of Israeli military occupation.

The terms “occupation” and “occupied” are used several times in reference to Israeli control, and not merely as was the case last year only within a quotation or the name of an organization.

Too often, however, the State Department’s examination of Israeli human rights violations reads like a motion to defend Israel in the International Criminal Court: Seemingly every violation is followed by reference to an ongoing Israeli investigation.

Yet unacknowledged by the State Department is that nearly five years ago Israeli human rights organization B’Tselem stated that it would no longer cooperate with Israel’s sham system for investigating abuses of Palestinian rights.

“We will no longer aid a system that whitewashes investigations and serves as a fig leaf for the occupation,” the group said.

Palestinians are the first who can attest to the systematic impunity afforded Israeli soldiers and settlers who injure or kill them or attack their property.

And, of course, one of Israel’s biggest ongoing crimes against Palestinians, the theft and colonization of land for illegal settlements, is Israeli government policy.

The section of the 2020 report on “Israel” – as distinct from the West Bank and Gaza – states that it “covers Israel within the 1949 Armistice Agreement line as well as Golan Heights and East Jerusalem territories that Israel occupied during the June 1967 war and where it later extended its domestic law, jurisdiction and administration.”

(Outside of two references to the Golan Heights in the executive summary, there is just one brief reference in the body of the report, pertaining to the limited voting rights of Druze from the occupied Syrian territory.)

But the next sentence undermines the reference to “territories that Israel occupied,” including East Jerusalem and the Golan Heights.

“The United States,” the executive summary reads, “recognized Jerusalem as the capital of Israel in 2017 and Israel’s sovereignty over the Golan Heights in 2019.”

Veering once again, the very next sentence asserts: “Language in this report is not meant to convey a position on any final status issues to be negotiated between the parties to the conflict, including the specific boundaries of Israeli sovereignty in Jerusalem, or the borders between Israel and any future Palestinian state.”

Even more confusing, the separate section of the report covering the “West Bank and Gaza” also claims that it “covers the West Bank, Gaza, and East Jerusalem territories that Israel occupied during the June 1967 war.”

Indeed both sections cover largely the same material when it comes to Jerusalem. For example, the May 2020 Israeli police killing of Iyad Hallaq, a Palestinian with autism, appears on page 3 of the “Israel” section and also on page 5 of the “West Bank and Gaza” section. Both sections misstate by a month the date he was shot and killed.

So it would appear that for now, East Jerusalem is, according to the State Department, everywhere and nowhere at the same time.

Meanwhile the State Department website’s list of “Countries & Areas” has an entry for Israel, but no equivalent entry for Palestine or even for the West Bank and/or Gaza Strip.

Under the Israel entry, the West Bank and Gaza can be found in a travel advisory.

Additionally, a “Palestinian Affairs Unit” is mentioned on a page headed “US Embassy in Israel.”

This unit appears to be what was formerly known as the US consulate in East Jerusalem.

Palestinians – and their rights – are clearly an afterthought or worse.

The United States still has pretensions that it can contribute to a peaceful solution to the conflict arising from Israel’s expulsion of Palestinians and ongoing occupation and colonization of their land – even if few others believe that.

A minimal step that would add a gram of credibility to that claim would be to clearly articulate the nature of the relationship of Israel over Palestinians: occupation, dispossession and apartheid.

But the word salad served by the State Department indicates that we face another four years in which Israel will be allowed to continue consolidating its colonization and control with full American support.