A TV documentary of the bomb threat against a Ryanair plan (vid) has confirmed our analysis of a false narrative which had been constructed by Belorussian regime change activists.

They had alleged that on May 23 a Ryanair plane had been forced by the Belorussian government to land in Minsk after which one activist on board, Roman Protasevich, had been arrested. But in reality a real bomb threat, delivered by email, had been received at Minsk airport as well as by Lithuanian air authorities. The plane was made aware of the threat by the Belorussian air traffic control and the pilot, after communicating with Ryanair management, had decided to land in Minsk.

Belarus handled the case by the book and the plane was released after it had been unsuccessfully searched for the alleged bomb. There were outstanding arrest warrants against two passengers on board, Roman Protasevich and his Russian girl friend Sofia Sapega. Both were detained after passing through the custom and passport controls.

Roman Protasevich had been betrayed. Other regime change activists, with whom he had disagreed, had sent the bomb threat email to get him trapped.

This is evident from his testimony in the later part of the TV documentary linked above, where he appears as a lively and engaged chain smoker.

A second Belorussian TV piece (vid), with a ninety minutes excerpt from a four hour long interview of Protasevich, was broadcast yesterday:

Former editor-in-chief of NEXTA Roman Protasevich interviewed the Belarusian state channel ONT. In it, he pleaded guilty in a criminal case to organizing and preparing actions that violate public order, and also criticized the Belarusian opposition and said he respected Alexander Lukashenko.

In the interview Protasevich is spilling the beans about the whole foreign financed opposition organization which was behind the 2020 color revolution attempt in Belarus. 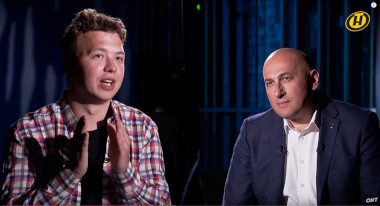 ‘Western’ media, as well as other regime change activist claim that Protasevich must have been tortured to say what he says. However, aside from light handcuff marks at his wrists there is no evidence of that. Protasevich had previously been wounded when he fought in the fascist Ukrainian Azov battalion against the Donbas secessionists. He is a tough guy who will not be impressed by handcuffs which, by the way, police everywhere use for good reasons.

At the beginning of the interview with Marat Markov, the head of the Belorussian state TV channel ONT, Protasevich is still somewhat tense. But after 3 or 4 minutes the talk develops into a lively exchange during which Protasevich at times interrupts and corrects the journalist. Protasevich’s voice sounds rough and at times pressed. He is a chain smoker and claims to have a cold. Towards the end, when they talk about the personal damage the color revolution attempt has caused to many, both get somewhat emotional but in no way hostile to each other.

Protasevich’s demeanor, engagement, body language and general attitude throughout the interview has me convinced that he doing it voluntarily and that he is telling the truth. He is not reading off a script someone else has written. He is doing a tell all about the foreign financed regime change effort he had been part of. And why not? He has been betrayed by his former comrades. He is now expecting up to fifteen years of jail. Telling it all might well help him to lessen the sentence for his crimes.

There are yet no English subtitles on the interview and there is no English language transcript of the interview. The following are excerpts from an eight part summary published in Russian language on Office Life. The text is machine translated:

Roman Protasevich on the air of the ONT TV channel on the program “Markov. Nothing personal”, said that he agreed to be interviewed completely voluntarily. But he noted that he had a little cold.

He added that it is difficult to predict how the opposition will react to the interview, and he would not be surprised to be called a traitor.

Protasevich stressed that he absolutely does not care what they say. He, according to him, just wants to do everything to correct his mistakes.
…
Roman Protasevich on the air of ONT suggested that information about his flight over Belarus could have been given by Daniil Bogdanovich, who was the project director.

Protasevich stressed that for the first time in a long time, he reported data on his movements to someone. He wrote about the flight from Athens in a chat, which includes Frank Viacorka and Daniil Bogdanovich. With the latter, Protasevich had a conflict. Roman claims that, in fact, behind his back on an online “phone call” it was said that he could be fired. He himself did not participate in the “call” due to poor communication at the hotel. His colleagues told him about the content.

Protasevich believes that it was Bogdanovich who could have initiated the possible dismissal.

The ‘black book’ is a Telegram channel used by the opposition to publish addresses and personal information about Belorussian policeman and their families.

Protasevich then gives some details of persons involved in the opposition operation and of their corruption. I will skip this here as most are unknown to me and of minor interest. These though are people we have heard of:

The interviewee also walked around Olga Karach. He said that she got her possession of a house with an area of 600 square meters. m in the elite area of Vilnius. Karach is trying to fight Tikhanovskaya for the money of the diaspora.

In addition, Protasevich said that ByPol, in his opinion, is financed by Poland. Also, according to him, the Polish side gave 50 million zlotys to the Belarusian House in Warsaw.

Then follow details about the NEXTA Telegram channel which was used to direct last summer’s demonstrations and riots in Minsk. According to Protasevich that channel has a following in Belarus of 500,000 people “at most”.

Protasevich is trying to lower the potential sentence against him:

Roman Protasevich said on the air of ONT that he respects Alexander Lukashenko. At the same time, he believes that some of the decisions of this politician were erroneous.

Protasevich admitted that he “criticized Lukashenka a lot”.

He claims that he realized that many of the things for which the head of state was criticized were an element of pressure. According to Protasevich, Lukashenka acted like a man with eggs of steel.

The financing of the NEXTA channel (translated as ‘Nektha’) with its extensive staff is discussed next:

On the air of ONT, Roman Protasevich said that initially the Nekhta project (recognized as extremist in Belarus) lived on advertising. The posts cost “good money”: for example, $20 thousand. Protasevich’s salary could be $1.5 thousand. In August 2020, 5 thousand euros came out.

At some point, according to Protasevich, there was Russian funding: 3-5 thousand euros per week. The money came from a certain company from Russia, which, judging by the name, is associated with the Urals and mining.

Its owner is a well-known Russian oligarch, and he is a direct competitor of Mikhail Gutseriev. Protasevich did not give his last name, but perhaps he means a native of Minsk, Dmitry Mazepin, who actually now controls Uralkali.

Protasevich also said that it was allegedly planned to transfer one of the Nekhta channels to Russian hands.

Roman Protasevich also said that the split in the Nekhta team was due to the figure of the Belarusian political emigration Ales Zarembyuk, who, according to the journalist, used Putilo and the entire project as a “cash cow”.

Now, according to Protasevich, advertising does not appear on “Nekhta”, although there are more staff in the editorial office. This, in his opinion, means that someone is supporting the project.

The socialist Belarus has extensive potash resources. That a fertilizer oligarch in neo-liberal Russia is trying to get his hands on it via regime change and privatization is not astonishing.

The next part is about the military coup attempt against Lukashenkowhich unraveled two months ago:

Roman Protasevich said on the air of ONT that he allegedly almost became a liaison “between the conspirators and the headquarters of Tikhanovskaya.” That is, his role was to bring the headquarters together with the defendants in the case of the conspiracy against Lukashenka.

Protasevich claims that he had constant contacts with Dmitry Shchigelsky, who now lives in the United States and they allegedly have a lot in common. Unlike Alexander Feduta and Grigory Kostusev, Shchigelsky was not detained by the Belarusian special services.

Roman also assures that there are “sleeping cells” in Belarus of those who advocate a forceful scenario of overthrowing the current government.

Protasevich also claims that Frank Viacorka was not included in the project for the violent overthrow. Roman believes that he has “too long a tongue.”

According to Protasevich, the conspirators talked about some 20 military families who had to be evacuated from Belarus, and they wanted to get large sums from the BySol fund for them, but this did not work out. Protasevich believes that in reality these military men and their families are fiction.

Protasevich then talks about his time with Azov:

At the same time, Protasevich says that he was not officially on the staff of “Azov”, and not in business “he was mainly engaged in photography.” But he was indeed given a light machine gun. However, with him, according to Protasevich, he did not participate in any hostilities, and almost all the time “was at the base.” Roman also admits that he violated journalistic ethics.

In addition, Protasevich admitted that he is afraid of some kind of extradition (to which country, it is not clear) and hopes that Alyaksandr Lukashenka will have enough political will not to agree to extradition.

Roman claims that allegedly not so long ago he was on the verge of returning to Belarus himself. He stated that he was cooperating with the investigation and rethought a lot in life. At the end of the interview, Protasevich actually burst into tears. After that, they showed the already separately recorded commentary of the presenter, where he explained that in fact the interview lasted about four hours and not everything was aired on the air.

—
Previous Moon of Alabama post on the Ryanair incident in Belarus: