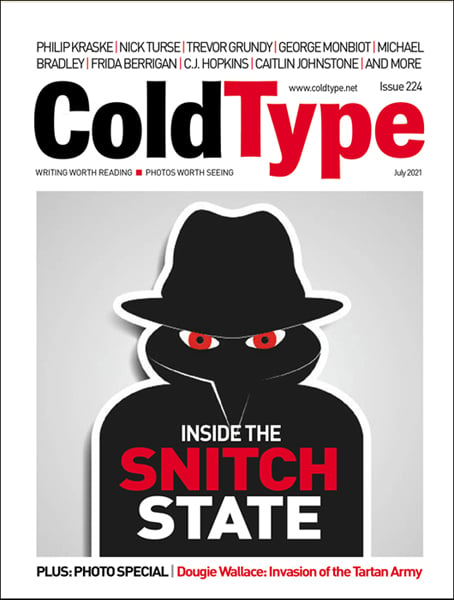 Welcome to the July issue of ColdType (and Happy Canada Day to all our Canadian readers).

This month’s cover story by John W. & Nisha Whitehead highlights the many chilling ways in which the US – and every other – government spies on the activities of its unsuspecting citizens. Other top stories include Michael Bradley’s award-winning essay from Australia about the animals that hunt humans for food, Frida Berrigan on the small towns on the US east coast that are home to the world’s biggest fleet of nuclear submarines, and Caitlin Johnstone on the mainstream media’s curious silence on new revelations about the Julian Assange prosecution.

We’ve also got a six-page photo story by Dougie Wallace on Scotland’s Tartan Army’s invasion of central London during the Euro 2020 football championships, C.J. Hopkins on the manufacturing of the ‘New Normal’ reality in which we now live, an excerpt from a new novella by Philip Kraske, while Nick Turse tells how he accidently amassed an encyclopedia of war atrocities.

This month’s Insights section includes George Monbiot on climate change, William J. Astore on US foreign policy, Tim Gopsill on 200 years of the Guardian newspaper, Celina Della Croce on the congressman who took on the Venezuela blockade, and Trevor Grundy on the row over a statue of Cecil Rhodes at Oxford University.