The New York Times has falsely claimed that the Chinese tennis player Peng Shuai accused her former lover of sexual assault. She did not do that.

In her post on the Chinese website Weibo (English translation) Peng Shuai only lamented that the relation with her old lover had come to an end. She did not accuse him of anything that could be considered an assault. The NYT made that up.

Romantic attraction is such a complicated thing that explain it clearly. From that day on, I renewed my love for you. Throughout my time with you after that, purely based on our interactions, you were a very good person, and you treated me well. We talking about recent history, as well as ancient eras. You educated me on so many topics, and we had discussions about economics, politics. We never ran out of things to talk about. We played chess, sang, played table tennis, played pool and also played tennis together. We always had endless fun. It was as if our personalities fit perfectly together.

Still the Times has continued to wrangle the non-issue into various‘news’ pieces and editorials. It is obviously using it to bash China.

On today’s [NYT] front page we find this nonsense. 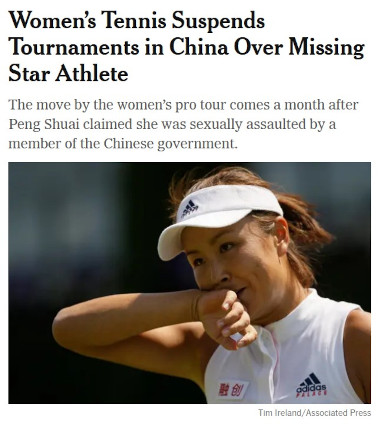 The women’s professional tennis tour announced Wednesday that it was immediately suspending all tournaments in China, including Hong Kong, in response to the disappearance from public lifeof the tennis star Peng Shuai after she accused a top Communist Party leader of sexual assault.

With the move, the Women’s Tennis Association became the only major sports organization to push back against China’s increasingly authoritarian government. Women’s tennis officials made the decision after they were unable to speak directly with Peng after she accused Zhang Gaoli, a former vice premier of China, in social media posts that were quickly deleted.

Peng Shuai did not disappear from public life. She has sent an email to the WTA which asked to respect her privacy. She has posted pictures of herself and video showed her taking part in a public tennis event and going to dinner in a public restaurant. The International Olympic Committee (IOC) has held a 30 minute video conference with her and found her well and happily alive.

Despite that the WTA and especially Steve Simon, its chief executive, have instead gone public with the issue and continue to intrude [on] her privacy.

The IOC in contrast has been discrete and has shown respect for Peng Shuai’s privacy. A short clip of their video call was published with her consent.

And today the IOC announced that it had another video call with Peng Shuai:

We share the same concern as many other people and organisations about the well-being and safety of Peng Shuai. This is why, just yesterday, an IOC team held another video call with her. We have offered her wide-ranging support, will stay in regular touch with her, and have already agreed on a personal meeting in January.

Unlike the NYT and loudmouth Steve Simon the IOC knows how to behave itself:

There are different ways to achieve her well-being and safety. We have taken a very human and person-centred approach to her situation. Since she is a three-time Olympian, the IOC is addressing these concerns directly with Chinese sports organisations. We are using “quiet diplomacy” which, given the circumstances and based on the experience of governments and other organisations, is indicated to be the most promising way to proceed effectively in such humanitarian matters.

It is no wonder then that Peng Shuai does not want to talk with the WTA’s Steve Simmon but stays in contact with the IOC.

The IOC again confirms that Peng Shuai is safe and well:

The IOC’s efforts led to a half-hour videoconference with Peng Shuai on 21 November, during which she explained her situation and appeared to be safe and well, given the difficult situation she is in. This was reconfirmed in yesterday’s call. Our human and person-centred approach means that we continue to be concerned about her personal situation and will continue to support her.

If the NYT were a decent paper it would stop its Peng Shuai campaign and delete its false claims of ‘sexual assault’ accusations and the ‘missing’ athlete.

But unfortunately it isn’t.