That recent working class anti-vaccine mandate protests have been met with either silence or derision from the Left speaks volumes about their allegiances. 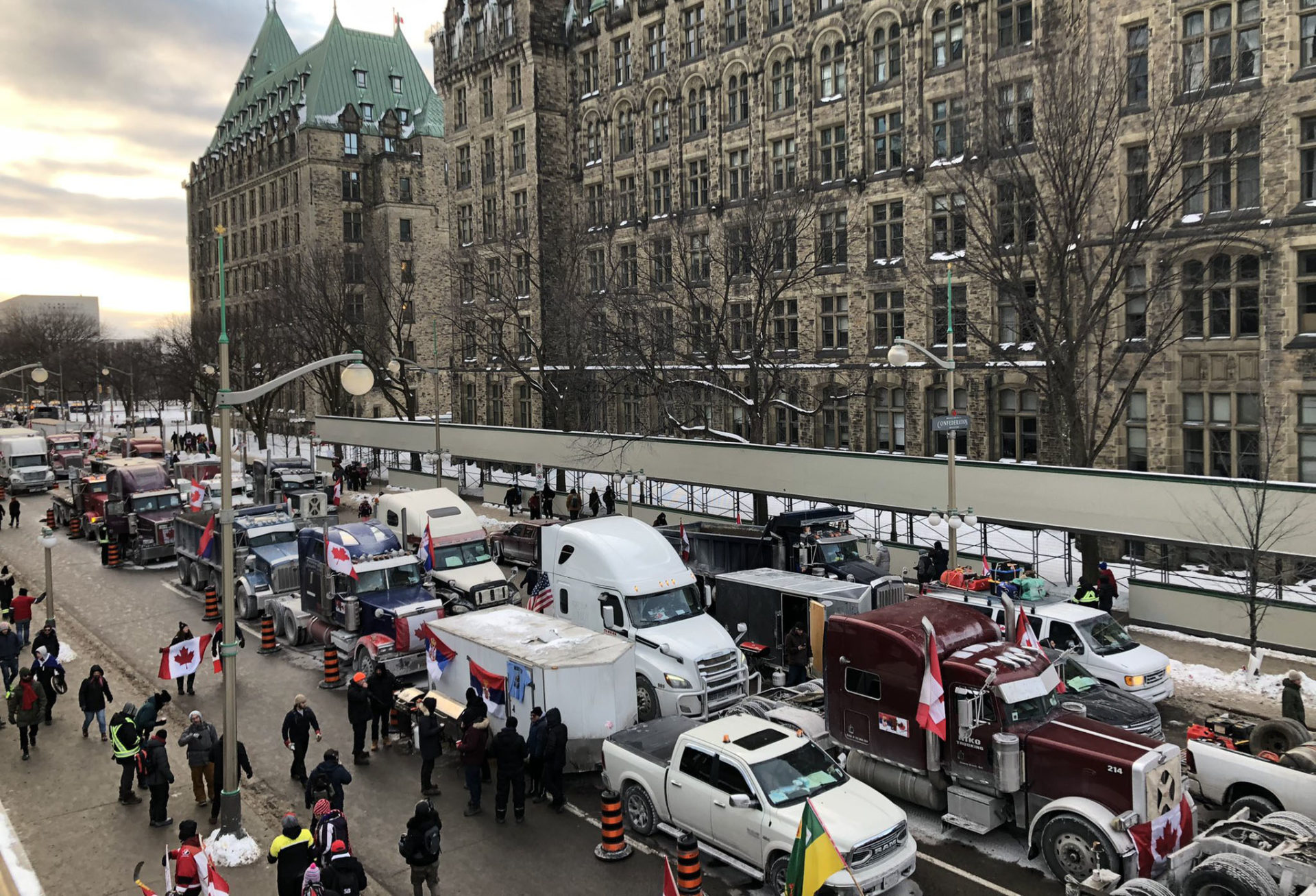 If you consider yourself on the political Left, you might be forgiven for not knowing very much about the many acts of worker resistance against the COVID-19 vaccination mandates that have taken place all around the world over the last year. This is because the professional Left media and activist class—while happy to cover traditional strike action over union contract disputes, such as with last year’s John Deere Company and the more recent Kroger strike in the United States—have completely ignored comparable labor struggles undertaken by working people over an issue which defies contemporary cultural associations; leaping over most racial, gender, and social divisions.

By making social and economic participation contingent upon the taking of a speedily-developed medical product, average members of the global labor force are being placed in a dehumanizing position—either participate in the world’s largest clinical trial, or be cast into a life of social alienation and privation. Resistance to these vaccine mandates has been expressed through walkouts, picketing, coordinated sickouts, mass resignations, and most recently in Canada, massive truck convoys. And while COVID lockdown-related supply chain backups continue to play out, such revived worker militancy is adding to the already existing crises in the shipping, healthcare, and retail industries.

With such abundant unrest on the labor front it is interesting to note that the Left press appears more concerned with covering the class character of the sport of cricket, or asking whether or not it’s OK to laugh at the unvaccinated when they die of the COVID-19 virus.

This silence betrays the Left’s allergy to the varied social character of the working class as it actually exists in 2022. Any amount of social conservatism among the lower and working classes flies in the face of the Left’s condescending narrative of the downtrodden as the most morally dignified political subject. (After all, that is how the chattering class see themselves, and do they not have workers’ best interests in mind?)

The most spectacular anti-mandate protests of late have been seen in Canada, where a 50,000-strong truck convoy has wound its way from British Columbia to Ottawa in protest of a recently implemented regulation requiring all truckers returning from the United States to show proof of vaccination before they can re-enter the country. Even so, the demonstration has broadened to include Canadians of all working-class professions who have had it with pandemic restrictions in general, and with Prime Minister Justin Trudeau, in particular.

(Predictably, Left-wing activists have met these protests with insults, mockery and accusations of racism and fascism.)

Such political outbursts are reminiscent of a spate of similar demonstrations last year. In October, Southwest Airlines was forced to cancel over 2,000 flights during what was widely rumored on Twitter to be a coordinated anti-mandate sickout. (Hard evidence for a coordinated strike is elusive, however Southwest walked back its policy only days after the mass-cancelation incident.) In Quebec, despite stern demands from the Interprofessional Health Federation and the Order of Nurses, healthcare workers demonstrated against the province’s looming mandatory vaccine deadline, which would have put thousands out of work. As was the case with Southwest, Quebec’s health minister backed down and delayed its implementation by a month.

“It cannot be stressed enough that these workers have mobilized against corporate colossi.”

And it didn’t end there. Teachers and students all over the state of California staged a large-scale walkout. Target and Walmart workers coordinated sick absences, and countless police and state troopers—sometimes with the backing of their unions, sometimes not—have clashed with local governments over the policy. An In-and-Out burger restaurant was temporarily closed by the city of San Francisco because its employees were flagrantly in violation of mandate rules.

But the October 2021 protests reached beyond North America. In Europe, Italy’s “green pass”—a COVID-19 vaccine passport mandatory for all workers in the country—was met with intense pushback from dock workers in the port city of Trieste. Their demonstrations were countered by police water cannons and tear gas in what has been one the most violent anti-vaccine mandate protests in the world.

It cannot be stressed enough that these workers have mobilized against corporate colossi. Pfizer, Moderna, BioNTech, Johnson & Johnson, and AstraZeneca, make up the majority of the global vaccine market share. Johnson & Johnson, for example, reaped $766 million from its single-shot product in the first nine months of this year. But those numbers are nothing compared to what Moderna has reported. In August the company said that they had earned just under $4.2 billion from their own vaccine.

This isn’t to suggest that these workers are all protesting vaccine mandates out of any sort of conscious ideological opposition to corporate monopoly power. What matters is that it has typically been the Left that pushes back against this sort of exploitation. But recently the lawmakers of the major Left-liberal political parties (which, let’s be honest, all Left media outlets and even the most fringe activist movements are beholden to) have accepted huge sums in campaign cash from the pharmaceutical industry.

Conspicuously, in the run up to the 2020 US presidential election, big pharma flipped its decades-long strategy of primarily donating to conservative Republican lawmakers in favor of spending most of it on Democrats, instead.

As a result we have an ostensibly socialist publication like Jacobin arguing that, because we are already subject to a litany of more dramatic intrusions upon our civil liberties (such as mandatory drug-testing for many workers and welfare recipients) and restrictions on freedom of movement for certain individuals under the pretext of “national security,” Americans may as well submit to a likewise invasive, but ultimately benign, state edict. In Canada the same argument is being made against the trucking protesters. Over in Spain, the communist website, Communia—usually among the better niche outlets—went out of its way to portray all COVID vaccine hesitancy as a type of reactionary anti-capitalism. That is to say, a movement composed of backward-looking reactionaries who only want to reverse those elements of capitalism which negatively affect them, while posturing as anti-capitalist more generally. Per their reasoning, resistance to these mandates signifies a desire for an individualist, a-la-carte style of capitalist domination. (As much as the term correctly applies to movements such as veganism and anti-GMO farming—you can’t turn back the march of technology—conflating the specificity of COVID-19 vaccination mandate resistance with all vaccine mandate resistance is dishonest and, frankly, anti-scientific.)

But the most alarming conflation made by the political Left apparatus is between anti-mandate protest action and domestic terrorism. In Chicago last year, Democratic mayor Lori Lightfoot accused the Fraternal Order of Police of trying to “induce an insurrection” by urging its police officers to ignore the order and risk disciplinary action from the city. It is true that such labor action runs afoul of the law, but it is also true that wildcat strikes and out-of-turn work stoppages are some of the most effective means of worker leverage.

Chicago’s police union ultimately asked the county court to step in, and eventually a temporary restraining order was issued against the mandate. But if the Lori Lightfoots of the political world do eventually succeed in getting their way, protesting workers may find themselves not only on the wrong side of the law, but under threat of serious and life-destroying criminal charges. The Department of Homeland Security issued a warning about the “heightened” threat posed by “extremists” opposing vaccination, and President Joe Biden’s Justice Department went so far as to ask the FBI to keep a lookout for potential violence committed against school administrators and staff by concerned parents.

As we have seen from the legal proceedings of the January 6th Capitol protesters, politicians have no compunction about bringing the full force of the state on individuals who act out of line. Opposition to such brutality used to be the principled domain of the Left, and should be especially important now that their faction is in a relative position of power.

If the institutional Left is unwilling to lift a finger, then it is up to workers on all sides of the cultural and political divide to take it upon themselves to apply the appropriate amount of popular pressure, even at the risk of personal ruin. That the Left feels it has bigger fish to fry is on the one hand a grave betrayal of its historic rhetoric against capital, and on the other hand in keeping with its century-plus tendency to cozy up to the bourgeoisie when the going gets tough. Who needs them?

Author
Edwin Aponte
@Edwin_Aponte_
Edwin Aponte is a writer and journalist based in Brooklyn. He is the editor and publisher of the Bellows.

One thought on “As Workers Resist, the Left Recoils”