This week, the IRR signed an open letter protesting a temporary High Court injunction against the United Voices of the World Union. This unprecedented legal intervention was aimed at suppressing strike action by outsourced security guards at Great Ormond Street Hospital (GOSH), prohibiting them from ‘waving banners’, ’vigorous dancing’ or even ‘making rapid dramatic movements’ within 200 metres of the hospital.

The protests of GOSH workers are part of a wave of strike action at hospitals and universities across the UK. Security guards, hospital workers, cleaners and catering staff have had enough, as have couriers who are staging similar protests in the gig economy. These strikes raise fundamental issues about the contemporary nature of racial discrimination in the workforce. But they also bring back memories of an earlier period of BME activism which A. Sivanandan wrote about in his classic text, From Resistance to Rebellion. (Free to download here).

In the 1970s, workers from Asian and Afro-Caribbean communities were treated as a second-tier workforce, forced to do the jobs that white workers didn’t want to do, in dirtier and more hazardous conditions, for less pay and often working ‘ethnic shifts’, Sivanandan writes. Because they faced not only the racism of the management, but, on occasion, that of white workers and trades union too, they were often forced to self-organise. Ultimately their struggles for equality and often for union recognition were to change the shape of trade unionism in this country.

There is much that is similar today, though, given privatisation, the fault lines in contemporary racial discrimination cases contested by UVW and Unite, and other trade unions, are often based on in-house versus outsourced work. It is BME and migrant workers who are more likely to be in the outsourced sector, which means less pay, fewer employment rights, comprising, as the November 2021 UVW vs Royal Parks’ judgement confirmed, indirect race discrimination.

The IRR will continue to keep track of workers’ struggles against racial discrimination in the employment/exploitation and industrial action section of our regular calendar on racism and resistance. But for the wider picture of workers’ rights internationally and in the UK, we recommend reading the Bureau of Investigative Journalism’s Emiliano Mellino’s weekly update on work and labour issues. 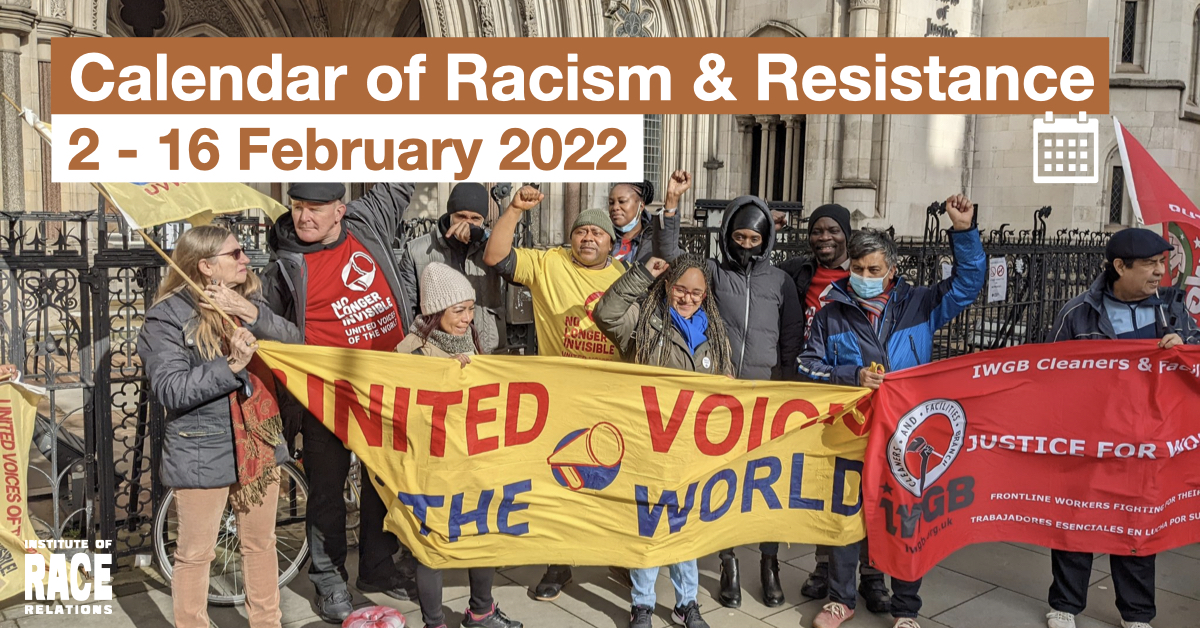 In this week’s calendar, we document the wave of industrial action amongst mainly outsourced BME workers. Plus: how the run-up to the Hungarian and French elections are proving ugly, with more smears against George Soros and attacks on ‘woke’ culture and the wearing of the hijab.