There was little operational news from the ground that could be verified. Despite that lots of claims were made about the progress or non-progress of the Russian campaign. I believe that these claims are nearly all propaganda and will refrain from reproducing them. 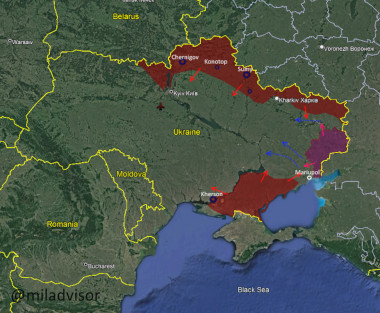 “Blue dots=Ukraine forces presence/siege of military HQ or control of all main roads around.”
Source – bigger

The units from Crimea are moving towards north and east. The eastern group, together with a move from Donbas west, is supposed to surround the Ukrainian units in and around Mariupol. Some Ukrainian units near to Donbas seem to fear getting encircled and are moving out.

There was a Russian attempt to capture another airport by an air assault. It may have failed. I have seen no hard evidence to confirm that in either way.

Russia has moved in more heavy rocket and mortar artillery. The so far rather light touch of the traditionally very strong Russian artillery may well get stronger.

Several European countries are sending weapons to the Ukraine. This is mostly ‘small stuff’ like machine guns and anti-tank missiles. Throughout the day there were lots of international diplomatic reactions and promises. AP had a live update that catches these.

The idea of kicking Russia out of Swift seems to be still on that table. It would be the beginning of the end of U.S. dollar supremacy.

The U.S. aim is to create an insurgency in the Ukraine.

Since 2015 the CIA has trained Ukrainian groups for exactly that purpose.

CIA support for Ukrainian Nazis has a long history.

Op-Ed: The CIA has backed Ukrainian insurgents before. Let’s learn from those mistakes – LA Times

A new Nazi insurgency in eastern Europe is an exceptionally bad idea. Fascist groups form everywhere would join in. A few years from now it may well lead to Nazi terror in many European countries. Have we learned really nothing from the war on Syria and the ISIS campaign?