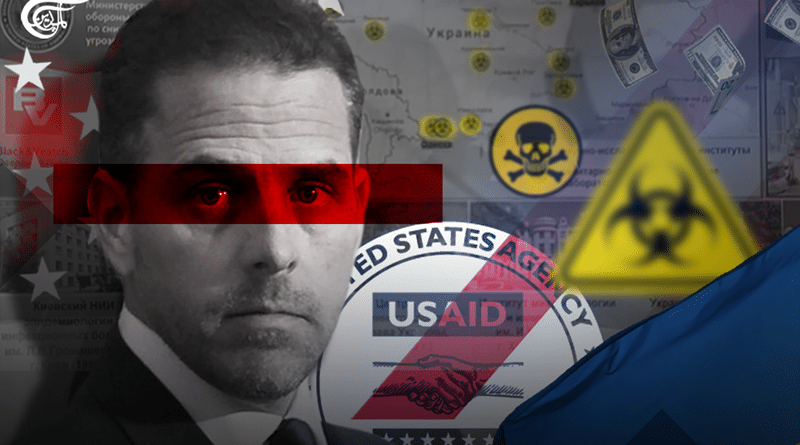 The Russian MoD has released scandalous documents exposing US-funded projects and plans to create and concentrate deadly pathogens and diseases while inventing devices and vehicles to spread them.

The Russian Defense Ministry has exacerbated an already flared scandal of Hunter Biden‘s connection and correspondence with employees of the Defense Threat Reduction Agency and Pentagon contractors in Ukraine. This comes after Putin had already demanded Washington expose its biological activities in Ukraine, which have been threatening Russia and Europe inclusively.

Hunter played a significant role in paving the way for a financial opportunity for a pathogen to work in Ukraine, raising funds for Black & Veatch and Metabiota, according to the Russian Defense Ministry.

The Vice President of Metabiota, in one of the letters, said that his company’s work will aim to ensure the “cultural and economic independence of Ukraine from Russia,” according to the MoD.

Part of Russia’s war on Ukraine was the cessation of activities in 5 biological laboratories in Kiev, which have been collaborating with imperial arms of the US government, including USAID, US Department of Defense, US Department of State, US Democratic party, US Defense Threat Reduction Agency, and more to create biological weapons. 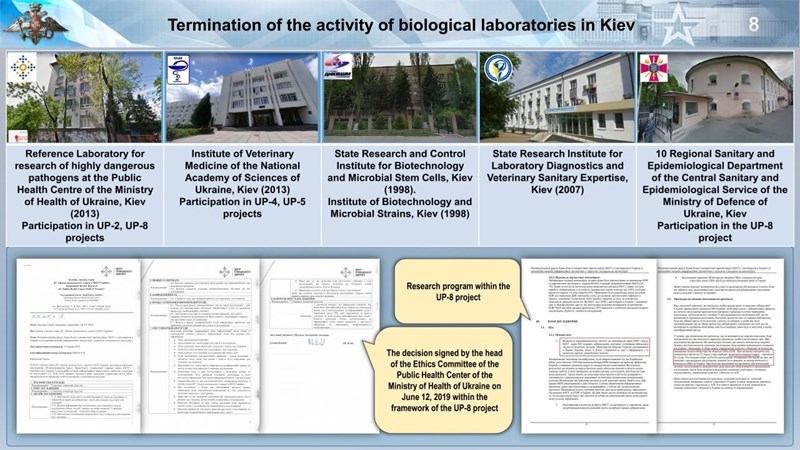 The 5 biological labs that the Russian army has halted (Sputnik)

Investors in the biological facilities in Ukraine are Hunter Biden, Rosemont Seneca, and George Soros and his Open Society Foundations.

The Pentagon, the headquarters for the United States Defense Department, issued contracts with a number of labs, such as Metabiota, Black & Veatch, and CH2M Hill. 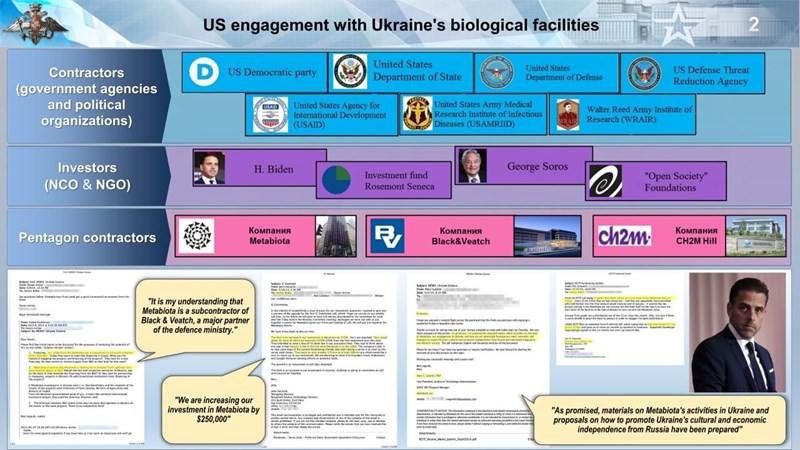 As per the documents, US specialists were making drones that can carry poisonous radioactive and narcotic substances.

One letter exposed a correspondence between Cooperative Threat Reduction Programme (CTRP) Director Robert Pope and the Ukrainian Health Minister, Ulyana Suprun. The letter, sent by Pope, praises the cooperation between the US government and the Ukrainian leadership and names a number of steps that need to be taken to achieve certain “objectives”.

One of the steps toward objective achievement was to analyze the survivability of substances of very high concern (SVHC). What accounts for an SVHC is a chemical compound that is carcinogenic, mutagenic, or toxic for reproduction and are potential endocrine disruptors, which can harm hormonal development, the nervous system, the reproductive system, and other vital biological processes.

The second was to strengthen and consolidate the SVHC, concentrating the biological weapon into one depository in Ukraine.

The third was the isolation and destruction of the SVHC – except where preservation of its organisms is in line with “global best practice.” 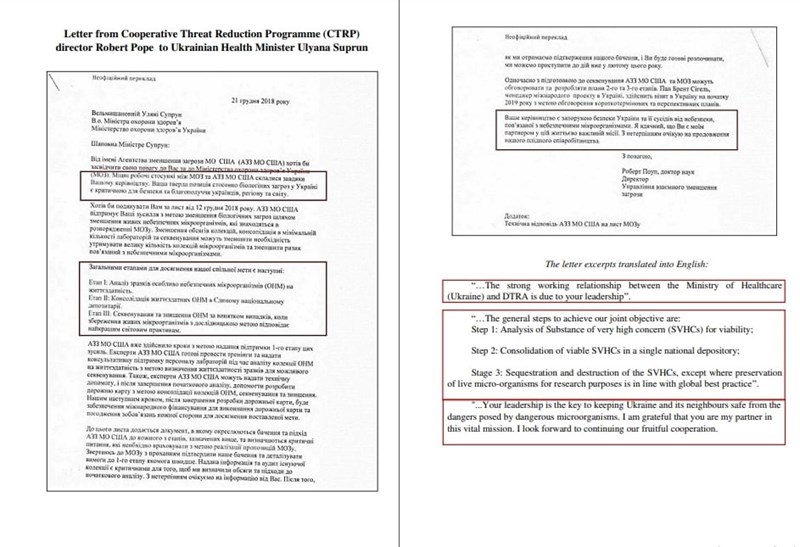 The letter between the CTRP Director and the Ukrainian Health Minister, Ulyana Suprun. (Sputnik)

In another instance, a leaked correspondence between the Turkish defense company, Baykar, and Motor-Sich, an aircraft manufacturer in Ukraine, exposes Ukraine’s questions directed to the company, asking them whether their UAVs can “spray aerosols with a capacity of more than 20 liters” to which Baykar answered, “No”. 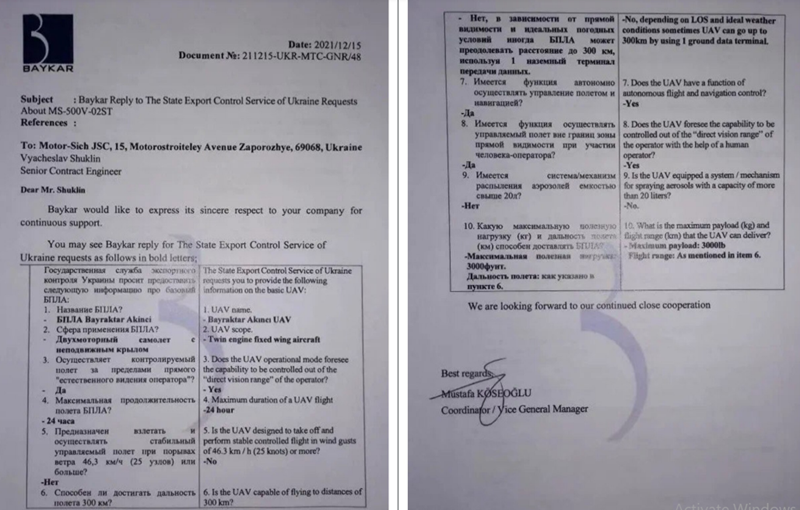 Baykar’s correspondence with Motor-Sich, a Ukrainian airline engine manufacturer and one of the largest in the world (Sputnik)

Another question that struck as alarming is whether the UAV can travel more than 300 km, which may pose a threat to Russian security as the vehicle, which is intended to spray aerosol, can travel for use in Russian territory.

The Russian Defense Ministry said that such questions could prove that Kiev was developing delivery vehicles for biological weapons with the possibility of using them against Russia.

Another document revealed the US issuing of a patent for a drone that releases biological weapons, clearly stating the intention to use drug-infested insects to spray “enemy troops”. The sentence clearly goes by,

“…By using a drone to spread infested insects, enemy troops can be eliminated or disabled without risk to our troops.”

The most prominent patent, which was issued in 2015, was for a Toxic Mosquito Aerial Release System (TMARS). It is an unmanned aerial vehicle operated by remote control, made for biological warfare. In the document, under the title of “Advantageous Effects of Invention,” a paragraph follows:

With the Toxic Mosquito Aerial Release System, large masses of people can be immunized or enemy troops can now be wiped out or rendered useless without having to risk or endager our own troops. The Toxic Mosquito Aerial Release System is extremely low cost and can easily accomplish what a billion dollars in medical interventions and airstrikes cannot do.

The mosquitos in the Toxic Mosquito Aerial Release System can be contaminated with various types of genetically altered bacteria to activate the immune system, or contaminated with toxic sickness agents depending on the objectives. For military purposes, the mosquitos may be used to deliver an agent such as malaria to create sickness, or they could use much more toxic or highly contagious agents and viruses. A highly contagious virus could wipe out 100% of the enemy troops because the ones that did not get bitten will be contaminated by their fellow soldiers. 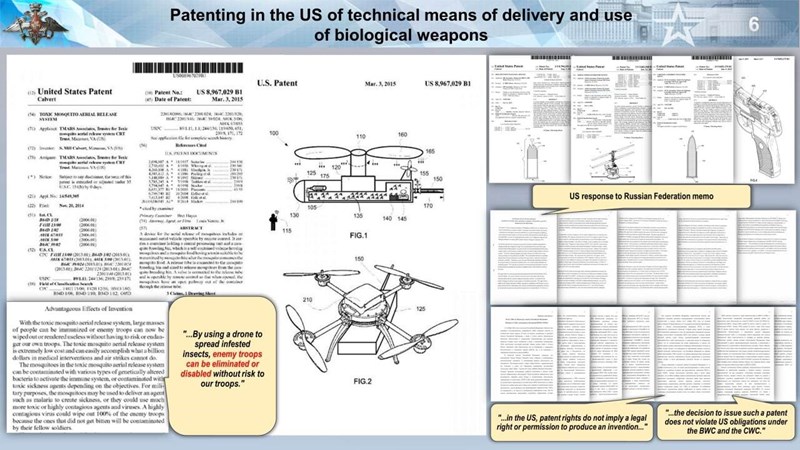 The patenting took issue in the United States, with documents clearly explaining biological use to kill or disable troops (Sputnik)

The Russian Defense Ministry has also exposed the names behind the DTRA, Black & Veatch, and Metabiota. 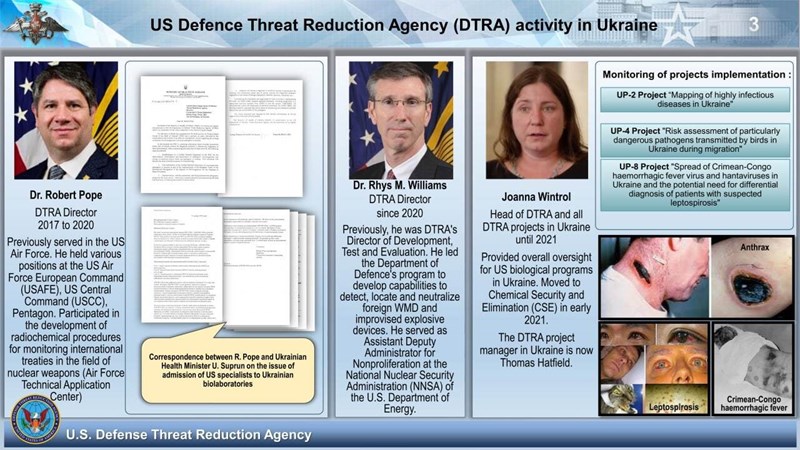 A document that exposes head personnel working for the US Defense Threat Reduction Agency (DTRA) in Ukraine, in addition to key projects they have or are working on (Sputnik)

The documents revealed a number of projects the DTRA has monitored and implemented, including the UP-2 project, “Mapping of highly infectious diseases in Ukraine,” the UP-4 Project, “Risk assessment of particularly dangerous pathogens transmitted by birds in Ukraine during migration,” and the UP-8 Project, “The spread of Crimean-Congo hemorrhagic fever virus and hantaviruses in Ukraine and the potential need for differential diagnosis of patients with suspected leptospirosis.”

The three personalities mentioned in the DTRA document are Dr. Robert Pope, former DTRA Director, Dr. Rhys M. Williams, the in-office DTRA Director, and Joanna Wintrol, who was the Head of the DTRA and all DTRA projects in Ukraine until 2021. 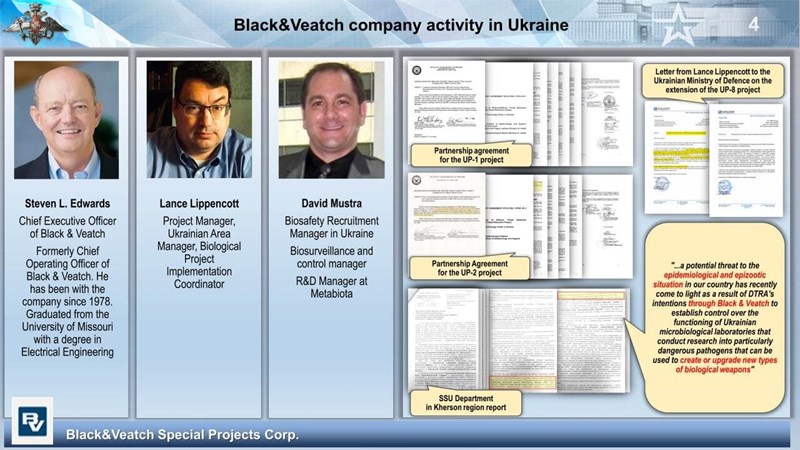 Black & Veath, which is Metabiota’s partner, has partnered with DTRA on the UP-1 and UP-2 projects (Sputnik)

Black & Veatch, which has received enormous amounts of funding from Rosemont Seneca, Biden’s investment fund, has partnered with the DTRA on biological weapon projects, including UP-1, UP-2, and UP-8.

The three executives working for B&V in Ukraine are Steven Edwards, the CEO, Lance Lippencott, the project manager and implementer, and David Mustra, the biosafety recruitment manager in Ukraine, among other things.

The document also exposes a report by the internal security department in Kherson, Ukraine, which writes, “… a potential threat to the epidemiological and epizootic situation in our country has recently come to light as a result of DTRA’s intentions through Black & Veatch to establish control over the functioning of Ukrainian microbiological laboratories that conduct research into particularly dangerous pathogens that can be used to create or upgrade new types of biological weapons.”

In 2011, the Ukrainian Scientific Technical Center and Black & Veatch received an official recommendation from the US Department of State in 2011 to cooperate on biological research for the DTRA.

In a reply letter from the Vice President of B&V, the company said it has been working toward the interests and demands of the DTRA in Ukraine since 2008 and that there are numerous projects to be planned and implemented in the near future, namely UP-1, UP-2, and UP-3. The Russian Ministry of Defense has also published documents for UP-1 and UP-2, displaying the contract and funding. 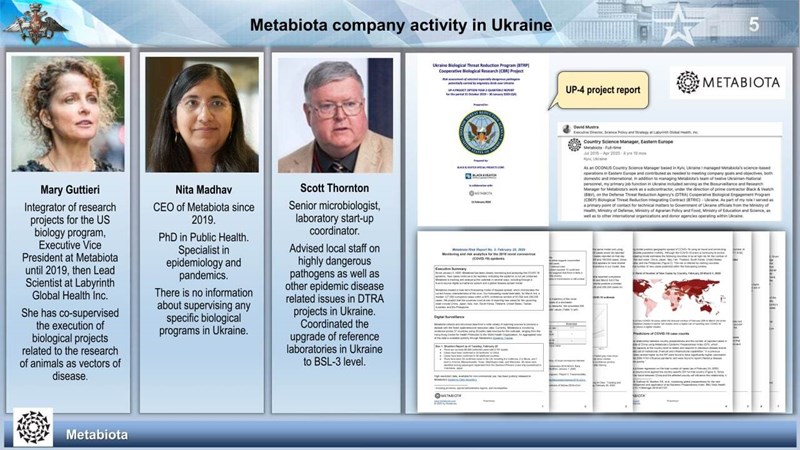 Other than exposing documents backing the UP-4 project, the document exposed Mary Guttieri, who is the executive vice president of Metabiota, who worked along with Nita Madhav, the CEO, and Scott Thornton, senior microbiologist and laboratory start-up coordinator.

In an April 2014 memo to Hunter Biden, Mary Guttieri discussed “how we can potentially leverage our team, networks, and concepts to assert Ukraine’s cultural and economic independence from Russia and continued integration into Western society.”

Another memo revealed that Biden had pitched a “science project” involving Metabiota and Burisma, the Ukrainian natural gas company where Biden was a board member and earned millions of dollars. 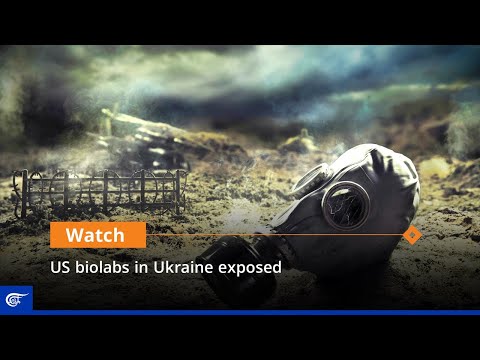 In 2014, the US awarded Metabiota $23.9 million, with $307,091 allocated for “Ukrainian research projects,” according to government spending records.

UP-8 project
The UP-8 project took place in Lvov, Kharkov, Odessa, and Kiev.

The Russian Defense Ministry highlighted that human biosamples and dangerous pathogens and their carriers were transported from Ukraine to the Lugar Center in Georgia, laboratories in Britain, and the Loeffler Institute in Germany.

In the same context, Russia’s MoD released original documents about the UP-2 Pentagon project, which aimed to carry out molecular analysis of dangerous infections endemic to Ukraine. 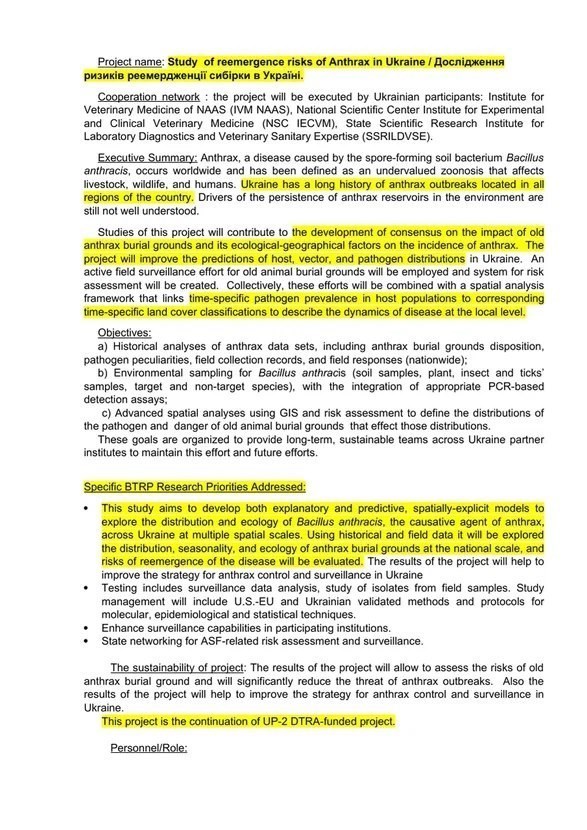 The official presented a document dated March 6, 2015, confirming the Pentagon’s direct participation in the financing of military biological projects in Ukraine, stating that, as is customary, US projects in the field of sanitary and epidemiological well-being in third countries, including Africa and Asia, are funded through national health authorities.