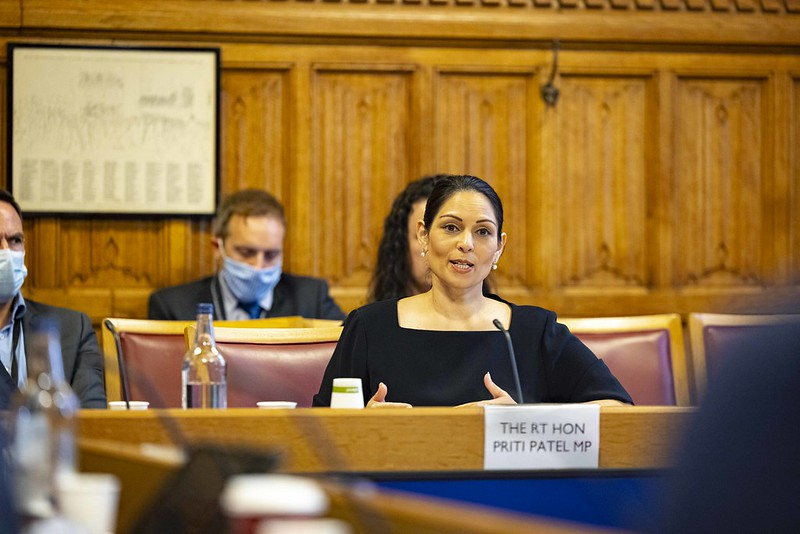 This article was funded by paid subscribers of The Dissenter Newsletter. Take 25% off and become a monthly subscriber to help us continue our independent journalism

All main political parties in the United Kingdom have called for immediate passage in Parliament of new measures to fight “state threats,” which would restrict press freedom and threaten civil liberties.

The parties claim that measures in this legislation are necessary to prevent the influence of Russian oligarchs and figures like Christine Lee, a lawyer in the UK who was accused by MI5 of being a Chinese agent.

Much of the bill, however, has nothing to do with foreign interference and civil society groups have criticized the legislation.

In 2015, the Cabinet Office requested that the Law Commission, an organization of individuals in the legal profession who advise the government) review the Official Secrets Acts, which apply to unauthorized disclosures of classified information.

The National Union of Journalists (NUJ) expressed concern, raising the government’s history of prosecuting journalists indicated the proposed reforms would harm their members and criminalize the handling of classified information.

“The NUJ strongly believes that whistleblowers and journalists acting in the public interest should not be subjected to increased prison sentences for unauthorized disclosure offenses,” the organization declared. “We are particularly concerned that the [UK] Home Office appears to be recommending reforms, which would make it easier to prosecute journalists.”

Additionally, in 2020, a committee in Parliament published their highly publicized “Russia Report” that analyzed alleged foreign interference in the UK. They recommended the government create a “foreign influence registration scheme.”

Such a scheme would require individuals to register if they undertook certain actions at the behest of a foreign power. If a person was found to be acting as an agent, the government would have the authority to imprison them.

This power was proposed despite the Russia Report’s failure to find any significant interference. In fact, it merely asserted that MI5 had failed to investigate the issue.

Both proposed reforms were combined into one piece of legislation called the “National Security Bill.”

A first draft was introduced into Parliament onMay 11. In an accompanying statement published by the Telegraph newspaper, Home Secretary Priti Patel cited the case of Christine Lee as justification for the bill.

MI5 sent an alert to all members of Parliament (MPs) in January 2022 accusing Lee, a Birmingham-based solicitor, of lobbying and making donations to MPs on behalf of the Chinese state.

The story was featured on both the BBC and the British commercial network ITV evening news on the same day. The security service’s claims were uncritically reported.

Each of the UK’s major papers ran the story and turned to Patel and other politicians who support the new measures for comment.

In a parliamentary debate three days later, multiple MPs from all of the most prominent political parties urged Patel to bring the new laws forward on the basis that a foreign agent registration scheme was necessary. Some even called for Lee to be arrested or deported.

News media and politicians in Australia in 2018 warned against MPs getting donations from Chinese Communist Party-affiliated individuals. Similar legislation was rushed through their parliament. It was sold as a measure against foreign interference but contained the same restrictions on journalists. (These similarities could be more than coincidence as Patel has been advised by the Australian government on the new laws.)

Following the Russian invasion of Ukraine, the calls for new laws grew louder. A Guardian piece from mid-March quoted Yvette Cooper, the shadow home secretary, and Tom Tugendhat, chair of the Foreign Affairs Select Committee, who called for the bill to be rushed through Parliament on the basis that foreign agent registration was needed to combat the influence of Russian oligarchs.

The Liberal Democrats foreign affairs spokesperson Layla Moran said, “It’s deeply concerning that we could be waiting for up to another year for these vital measures. We all know that the existing counter-espionage legislation is unfit for the 2020s. If ever there was a time to update it, it’s now.”

“Just as the government fast-tracked the economic crime transparency and enforcement bill, they could do so with these additional measures,” Moran recommended. “The Liberal Democrats stand ready to sit over weekends and Easter recess to get these vital measures through as quickly as possible.”

Typically, the process of passing legislation takes months or years as it is publicly scrutinized and debated.

A briefing prepared for MPs acknowledged an expansion of the Official Secrets Act in 1911, which made it illegal for all individuals (not just civil servants) to publish any government documents, was passed through the House of Commons in a single day whilst most MPs were away during Grouse hunting season. This was prompted by a fear of German interference, which according to an officially commissioned history was later found to be exaggerated by MI5.

If the government takes opposition MPs up on their offer and repeats this history, there will be little time to analyze new additions to the legislation that were not mentioned during the consultation process.

As Patel outlined, the bill would give the government expanded authority to catch “perpetrators” before “serious damage is done, and it will allow the courts to hand down significantly longer sentences for foreign state backed crimes.”

A possible life sentence for whistleblowers and journalists handling classified information, if they are found to be working to benefit a foreign power, is in the legislation.

Text in the bill also indicates authorities would not have to necessarily prove an individual was working for a particular foreign power. The measures may also apply extraterritorially to individuals outside of the UK.

Protect, an NGO which supports whistleblowers expressed relief that the need to prove whistleblowers actions were damaging to national security was not removed but added, “Whether intended or probably unintended, whistleblowers based in the UK raising concerns either with foreign-based journalists or regulators/law enforcement could be caught up in prosecutions.”

“So we’re relieved the government has moved away from one set of draconian reforms, but we’re worried they’ve not thought through the consequences of the new offenses,” Protect concluded.

WikiLeaks founder Julian Assange faces extradition to the US in a case that Amnesty International labeled a “grave threat to press freedom.” Assange was widely and misleadingly reported to be working with the Russian government. He is the target of the US Justice Department’s alarming extraterritorial application of the Espionage Act.

The bill would enshrine this method of delegitimizing dissident journalists into law, and Patel is in charge of deciding whether the UK government signs off on Assange’s extradition to the US.

While reading the bill in Parliament, Patel said that at some point a foreign influence registration scheme will be added.

None of the proposed measures are final, since the legislation will likely undergo alterations.

A minority of voices have suggested that the threat of foreign interference has once again been exaggerated, and the UK government’s proposals are an overreaction.

Conservative MP Mark Howard wrote in an editorial that his work for the foreign office in Shanghai was not significantly different than what MI5 accused Christine Lee of doing. She was accused of funneling money from foreign nationals and passing it off as her own donations. (MI5 did not provide evidence of this claim.)

Labour MP Barry Gardiner, whose parliamentary office received most of Lee’s donations, regularly spoke in Parliament in favor of a Chinese state-owned company having a role in building a nuclear power station in the UK. The coverage at this time also noted that Lee advertised her position as the Chinese embassy’s lead consultant on her law firm’s own website.

In response to the home office’s planned reforms, Transparency International noted that the government’s proposals neglected to mention money laundering or corruption as a means of influencing the UK. They also acknowledged that a foreign registration system already exists in America, which the home office intends to emulate.

The United States government requires Chinese and Russian state-affiliated media outlets to register, whereas the BBC and other state media are exempt. The system has been wielded for politically motivated prosecutions.

One infamous historical example of selective application of such laws was when American writer and activist W.E.B Dubois was charged with being an unregistered Soviet agent for circulating an anti-nuclear weapons petition.

Both Hungary and Russia have used similar schemes to shut down civil society organizations and press outlets.

Transparency International recommended that the government tighten existing lobbying rules to deal with this phenomenon instead of passing this legislation.

Yeow Poon, chairman of the Chinese Liberal Democrats, wrote on his group’s blog that what Lee was accused of is no different than others lobbying on their country’s behalf. He commented that her denouncement would cause members of the Chinese community to be hesitant to participate in British public life. Lee herself has not made any public appearances since January.

Poon has conducted interviews with various members of an anti-Chinese racism group he leads.

Alex Yip was originally from Hong Kong and is a councilor in Birmingham. Until 2015, he was vice-chair of the British Chinese Project (BCP), which Christine Lee chaired.

In his interview with Poon, Yip described his work with the organization as focused on advising the police on a response to the rise in Asian hate crime, registering members of the Chinese community to vote and other community organizing activities.

The Times ran a story on Yip organizing a fundraising dinner in 10 Downing Street, which was attended by Lee. He told Poon the article implied that he was an agent of the Chinese state which he denied, citing his work supporting individuals granted asylum from Hong Kong who arrived in Birmingham.

Poon also interviewed Pek-San Tan, who sat on a government-funded committee set up to help settle Hong Kong residents moving to Britain. Senior members of the Conservative Party campaigned to have Tan removed from this position on the basis that she worked for an organization in London, which expressed support for China’s position on Hong Kong.

Tan told Poon that since these accusations were made against her she has not been invited back to the committee’s meetings. She also said that her volunteering with the group consisted of assisting with press accreditation and supporting artists/guests with interviews during the Chinese New Year event, which the group organized over a period of two-to-three weeks for the past four years.

A report from the Telegraph, which also highlighted her association with Christine Lee, conceded that Tan was “not known to have expressed pro-Beijing views in a personal capacity.”

When presented with some of the sources in the article, Poon responded. “It is right that we should have proper laws to protect our democracy from foreign political interference. However, I am concerned of a possible witch hunt based on hearsay and allegations made without proper investigation and evidence.”

“I hope that we will learn from the flaws in Australia and the United States legislative responses, especially in protecting the rights of diaspora communities, and the use of alarmist Sinophobic public discourse and sensational news reporting resulting in racism and hate crime against people of Chinese, East and Southeast Asians heritage,” Poon declared.

Along with the fear of Russia’s influence leading to xenophobia toward Russians, it has also contributed to an increased amount of smearing against people dissenting against UK policies.