The amount of copium available for Ukraine fans seems to be dwindling.

More mainstream media now report on the huge damage the Russian artillery is causing to the Ukrainian frontline troops. Even the New York Times joined in:

Under the fire of Russia’s long-range arsenal and facing a desperate need for ammunition and weapons, Ukrainian forces remain outgunned on the long and pockmarked eastern front, according to military analysts, Ukrainian officials and soldiers on the ground.

Just one engagement on Thursday and Friday on a small swath of the line, in a forest north of the town of Sloviansk, sent about a dozen Ukrainian soldiers to a military hospital with harrowing shrapnel wounds.

“Seventy people from my battalion were injured in the last week,” said a soldier and ambulance driver just outside the hospital gates who identified himself only as Vlad, 29. “I lost too many friends; it’s hard for me. I don’t know how many. … It’s getting worse every day.”

The night before, he said, the shelling was so loud he hardly got any sleep. “It’s all artillery bombing down,” he said. “All the wounded are coming from shrapnel. Most guys in the trenches haven’t even seen the enemy face-to-face.”

Since beginning of the war I have pointed to the huge amount of artillery Russian forces are traditionally using.

‘Western’ doctrine, which is essentially U.S. doctrine, is betting on air supremacy. The enemy’s air defenses get destroyed in first few days of the war. After that enemy formations get wiped out by applying a huge amount of aerial bombing against them.

Russian doctrine never has believed in air supremacy. Russia itself has excellent air defenses so it knows what it is talking about. To destroy enemy formations Russia applies artillery, lots of it.

A standard U.S. brigade combat team (BCT) has two or three battalions with tanks or infantry as front formations and one battalion of artillery to support them. The rest of the brigade troops are various support units. 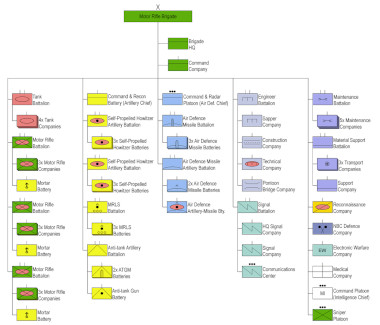 This 1 to 1 ration is repeated on nearly every level – battalion, brigade, division, army – of Russian ground forces. Here is how it looks when it gets applied.

Unless the defending forces are fully under armor or extremely well dug in, as they had been for eight years at the Donetsk frontline, they have no hope to hold out against Russian artillery. Since the Russian army broke through the immediate frontline the Ukrainians have lost the protection of fortified dugouts and are on the run.

None of the above is new and it was the reason why I and other could easily predicted that the Ukrainian army would lose the war.

After for months hyping Ukrainian victories that had never happened ‘western’ headlines now finally acknowledge the real state of the war:

Ukrainian media are still not allowed to report on the real state of the war.

Ukrainian forces have launched an offensive in the Kherson region, with Russian invaders suffering losses and defending on unfavorable positions.

The press service of the General Staff of the Armed Forces of Ukraine said this on Facebook, Ukrinform reports.

“As a result of offensive actions by units of the Defense Forces, the enemy suffered losses and started defending on unfavorable positions near Andriivka, Lozove and Bilohirka, Kherson region. Fighting continues.

While that item carries today’s date the action described in it actually happened Saturday and Sunday on the south western front line. 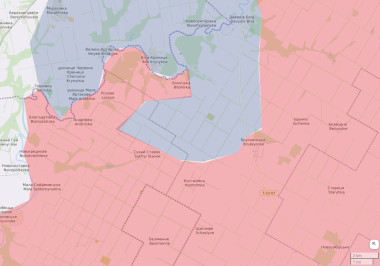 A several hundred men strong group of Ukrainian troops with armored vehicles crossed a bridge in Davydiv Brid over a river that delimits the Russian held territory in the south west from the Ukrainian held one. The group was tasked with pushing some 60 kilometers south to reach and sabotage the Dnepr dam west of Kherson. 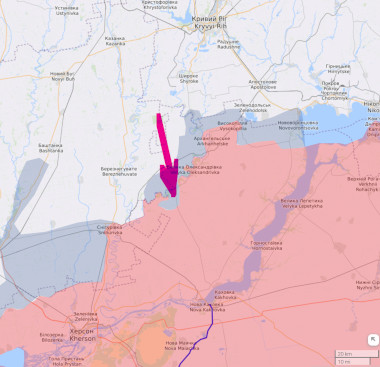 After progressing some 10 kilometers south a column of some 20 vehicles got clobbered by Russian artillery. The rest dispersed into the country side and is currently getting hunted down.

The whole operation had failed within a few hours. For the pre-planned mission it was way too small and attacked on a too narrow front. The Russian command decided that the planners of the brazen but useless Ukrainian operation deserved additional punishment:

including those of Operational Command South near Novy Bug, Nikolaev Region

, as well as 593 areas of AFU manpower and military equipment concentration and 55 artillery and mortar batteries at firing positions.

Novy Bug can be seen at the upper left of the second map. Ukraine confirmed that it has been attacked.

In total the Russian side claims that 200 Ukrainian troops died in the failed attempt while an additional 35 were killed in the strike on the South Command of the Ukrainian army.

The write ups about supreme Russian artillery quoted above are of course in support of the U.S. intent to send multiple rocket launcher (HIMARS) to Ukraine. These can, in theory, fire on targets from up to 300 kilometer away. However, Ukraine would only get ammunition for significantly shorter ranges of about 30 km:

Some White House officials had expressed concern that providing MLRS weaponry with a range of more than 180 miles would allow Ukrainian forces to hit targets far into Russian territory, potentially prompting an escalatory response from Moscow, but the White House is now comfortable managing that risk by withholding the longest-range ammunition for the system, a senior U.S. official told The Post.

With 300 kilogram each missile has significant weight. A truck with HIMARS can carry 6 of those while a tracked vehicle version carries 12. Resupplying these in significant numbers will be a logistic nightmare.

The White House has yet to say how many HIMARS it will send to Ukraine.

It is highly unlikely that the U.S. will send as many as the 100 plus missile launchers the Russians have already destroyed.

There is also the small fact that Russian air defenses can intercept such missiles in flight:

In addition, 9 Ukrainian Smerch multiple-launch rockets have been intercepted near Malaya Kamyshevakha, Kamenka, Brazhkovka, Glinskoe in Kharkov Region and Chernobaevka in Kherson Region.

In recent weeks the Ukraine also received a number of Su-25 fighter planes from some former Warsaw Pact state. Of the eight allegedly received recently at least five were reportedly destroyed by Russia within days of them reaching Ukraine.

All this additional arming of Ukrainian troops will have no significant effect on the battle field. It is unnecessarily prolonging the war.

Former Lieutenant Colonel of the U.S. Army Daniel Davis has written some realistic pieces on Ukraine. His latest though are a bit of fantasy. He describes in three parts “How Ukraine Can Drive Russia Out”.

First Ukraine would have to hold onto Donbas and with the help of raids and counterattacks unbalance the Russian forces. It would then perform a delaying retreat under fire to several new defense lines created in its rear. This delay action should allow for time to build a new force of 100,000 new troops in west Ukraine who would be equipped with a huge amount of new ‘western’ systems. It would take twelve to eighteen months to build and train that counterattack force.

Davis knows of course that each of those steps is completely unrealistic. His real advice is to negotiate an end to the war as soon as possible. But the writeup of what would really be necessary for the Ukraine to have at least a chance to win against Russia is helpful as it demonstrates the futility of such an effort.

There is no way for the Ukraine to turn the situation around or to win the war. The Ukrainian government has to give up. To stop the dying and the extensive amount of damage the war causes it must end now. To prolong it by supplying more money and weapons is criminal and should be punished.