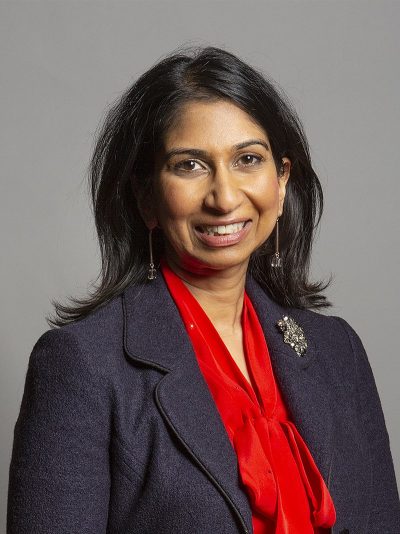 Refugee organisations have balked at new proposals by the British government to ban refugees who cross the English Channel from seeking asylum.

Home Secretary Suella Braverman set out the new plans at the Conservative Party conference on Tuesday in a bid to cut down the number of migrants taking the dangerous journey from France.

“If you deliberately enter the United Kingdom illegally from a safe country, you should be swiftly returned to your home country or relocated to Rwanda. That is where your asylum claim will be considered,” she said in her speech.

“UK policy on illegal migration should not be derailed by abuse of our modern slavery laws, Labour’s Human Rights Act, or orders of the Strasbourg Court.”

She said she would overhaul the Modern Slavery Act to prevent asylum seekers claiming to be victims in order to prevent deportation.

The Times reported on Monday that any legislation would be worded in such a way as to not put the UK in violation of the 1951 Refugee Convention, although a number of party sources told the newspaper that the country could be forced to leave the convention in order to implement it.

A spokesperson from the Refugee Council told Middle East Eye that refugees should not be “criminalised” and expressed concern that the move would put further pressure on the country’s obligations under international law.

“Prime ministers since Winston Churchill have committed to the Refugee Convention – which we were a founding signatory of – and we should be strengthening our commitment to this, not seeking to break from it,” said Enver Solomon, the organisation’s CEO.

Others suggested that the country could end up in breach of any number of international legal requirements.

“Banning anyone who crossed the Channel from applying for asylum here is unlawful as it’s in breach of the Refugee Convention, the Human Rights Act and common law,” said Beth Gardiner-Smith, CEO at Safe Passage International, speaking to MEE.

Britain’s “New Plan for Immigration”: Priti Patel and the Death of Asylum

“Trashing Britain’s record on human rights, and as one of the architects of the Refugee Convention, is reckless – it will cost lives and is bad news for us all.”

A violation of international law?

A policy of deporting refugees who arrived in the UK by irregular means to Rwanda was widely condemned and ran into legal problems, with the first attempted flight in June being blocked by court action.

However, Braverman has repeatedly boasted of her willingness to confront legal blocks on the government’s policies, threatening even withdrawal from the European Court of Human Rights (ECHR).

So far, the only countries to have withdrawn from the jurisdiction of the ECHR are Russia earlier this year, following the invasion of Ukraine, and Greece in 1969 following a military coup (it was later re-admitted).

No country has taken the step of withdrawing from the Refugee Convention, though many countries are not party to it.

According to Daniel Sohege, a lawyer and director of Stand For All, a consultancy firm specialising in immigration, the emphasis on penalising potential asylum seekers based on their method of entering the country was very likely illegal under international law.

“The Convention sets out very clearly that someone seeking asylum must not be penalised for their manner of entry. That is one of the most crucial aspects of international refugee law, as it recognises that the majority of refugees are not in a position to wait until someone decides that they can travel by a ‘resettlement route’,” he explained.

He added that the current existing Rwanda scheme – which has still yet to be fully implemented as a result of its own legal problems – would be inadequate under the new proposals.

“Would someone fleeing persecution from Iran, of which a high proportion of those crossing the Channel are, be sent back there?” he asked.

“This would clearly contravene the European Convention on Human Rights, among other things, regarding inhumane treatment.”

At least 30,000 people have reportedly made the crossing over the Channel in small boats so far this year, an increase on 2021.

Though polling has generally shown sympathy for refugees among the wider British public, the ruling Conservative Party has repeatedly focused on the issue and argued that tackling them is necessary to save migrants from exploitation by people smugglers.

However, rights groups argue that the ultimate impact of the policies has simply been to make seeking asylum in the UK at best unattractive and, at worst, impossible.

Yumna Kamel, legal education officer at Right to Remain, told MEE that what Braverman was proposing was largely a “continuation” of the policies pursued by her predecessor, Priti Patel, and the Nationality and Borders Act (NABA) passed earlier this year.

“Unless the reason for seeking asylum arises after a person’s arrival in the UK, according to NABA, it is now near impossible to enter the UK ‘legally’ with a view to claiming asylum,” she explained.

“Most people arrive clandestinely, via lorry or small boat, or by using a false passport – which the Refugee Convention pardons in many circumstances, but NABA has curbed in the UK – because most people are fleeing danger.”

Sohege said that the new policy, much like those previously implemented by Patel, had little to do with protecting migrants.

“It is a policy designed to stoke outrage in its inhumanity and illegality, not to be a practical means by which to reduce Channel crossings, which would require a focus on providing safer routes and simpler access to the UK asylum system,” he said.