We’ve got a rundown of 4 of the biggest positive developments of 2022. But first, an announcement…

Save the Date: May 3 is World Press Freedom Day

Assange Defense is planning something big in Washington D.C. for World Press Freedom Day on May 3, 2023. Stay tuned! 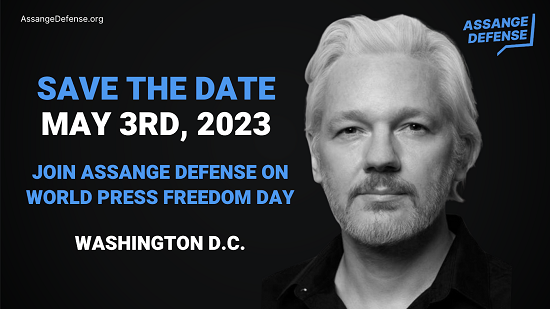 2022 Year in Review: An Optimistic Take

We know you won’t rest until Julian is free, but as we head into 2023, let’s revisit some of the important victories of 2022.

This isn’t so much a single victory as it is a collection of wins. The open letter from the publishers of 5 of the most influential papers on the planet (The New York Times, LeMonde, Der Spiegel, El País, and The Guardian) was huge, but there was so much more in 2022, including Ari Melber’s in-depth segment on MSNBC and big opinion pieces in The Chicago Tribune, Miami Herald, and elsewhere. We’ve long celebrated independent media outlets for speaking out on Julian’s behalf, but 2022 was the year “legacy” media finally got on board.

Press freedom and human rights groups from all over the world spoke up in 2022 and made it clear: the prosecution of Julian Assange is a threat to the First Amendment and our foundational democratic values. In April, a coalition led by PEN International formally petitioned the UK government to stop Julian’s extradition. In July, the International Federation of Journalists – the world’s largest association of journalist trade unions – launched a global campaign calling on the the United States to #FreeAssange. Earlier this month, a coalition of 21 prominent organizations – led by the Committee to Protect Journalists, the ACLU, and Amnesty International – wrote to Attorney General Merrick Garland urging him to #DropTheCharges.

As we look ahead to 2023, we can count on our coalition growing to include key world leaders. The #FreeAssange movement picked up support from leaders in Mexico, Brazil, and Australia, just to name a few.

The U.S. House of Representatives recently passed the PRESS (Protect Reporters from Exploitative State Spying) Act, which would strengthen “shield” protections for journalists, preventing the government from forcing journalists to reveal information about their confidential sources. The bill passed the House unanimously. Combined with the Justice Department’s new media guidelines, which rolled back some of the more abusive practices of the Trump administration, there is clear momentum for the cause of #PressFreedom.

In Memory of Dame Vivienne Westwood

Fashion icon and champion of freedom of expression Dame Vivienne Westwood passed away this week in London. In addition to her impact on fashion and culture, Westwood was a past trustee of the Courage Foundation and stalwart ally of the #FreeAssange movement. She will be sorely missed.

Even if you don’t have the time to get involved in your community, you can always write a Letter to the Editor using our new, easy-to-use LTE portal. Plus, it’s always helpful to spread the word on Facebook & Twitter.

We’ll have updates on our World Press Freedom Day plans and new initiatives to announce shortly, so stay tuned.