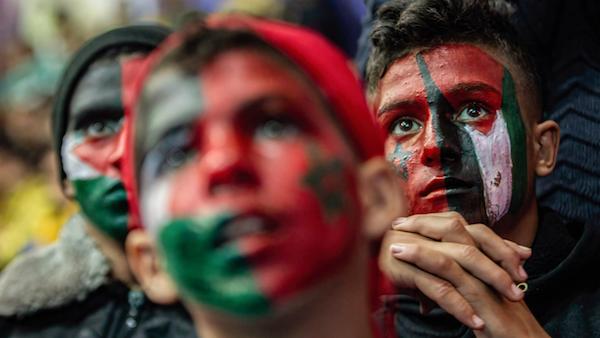 Two years ago, Morocco and Israel signed the US-brokered “Joint Declaration”, thus officially recognizing Israel and instating diplomatic ties. Though other Arab countries had already done the same, the Moroccan official recognition of Apartheid Israel was particularly devastating for Palestinians.

Years ago, a close Moroccan friend told me that the ‘first time’ he was arrested was during a solidarity protest for Palestine in Rabat which took place many years ago.

The reference to the ‘first time’ indicated that he was arrested again, though mostly for other political activities, suggesting that Palestine, in many ways, has become a local struggle for many Moroccans.

Whenever Moroccans protest for Palestine, they would do so in large numbers, sometimes in their millions. Such solidarity has historically served as the foundation of regional and global solidarity with the Palestinian struggle.

Though ordinary Arabs have always considered Palestine a core struggle, the relationship between North Africans and Palestine is, in many ways, unique and rooted.

Despite a strong push for normalization between Arab countries and Israel, countries like Algeria and Tunisia made it clear that no diplomatic ties between their respective capitals and Israel would be declared anytime soon.

Credit for this goes mostly to the Algerian and Tunisian peoples who have made their rejection of Israeli racism, and support for Palestinian freedom akin to local or national struggles. Palestinian flags have always accompanied flags of these countries during any large gathering, be it a political protest or a sports event.

Morocco is no exception. Solidarity with Palestine in this country goes back generations, and hundreds of activists have paid a price for confronting their government on its failure to stand up to Israel or to challenge Washington for its support for Tel Aviv.

The normalization agreement between Rabat and Tel Aviv in 2020 was falsely assumed to be an end to popular solidarity with Palestine. In fact, such acts of normalization, rightly considered a betrayal by Palestinians, were also meant to be the final delinking of Palestine from its Arab and regional environs.

However, this was not the case. Normalization with Apartheid Israel is still strongly rejected by the vast majority of Arabs, as opinion polls indicate. Moreover, the pouring of love for Palestine during the Qatar World Cup demonstrated, beyond doubt, that Israel cannot possibly be accepted by Arabs while still an occupying power and a racist apartheid regime.

The little political gains achieved by the Moroccan government in exchange for sacrificing the rights of Palestinians shall prove irrelevant in coming years. In fact, signs of this are already on display.

The Moroccan government, led by the Development and Justice Party of Saadeddine Othmani, which had taken part in the normalization efforts, was rejected en masse in the September 2021 elections. Only nine months earlier, Othmani was signing the “Joint Declaration” with Israel’s National Security Advisor, Meir Ben-Shabbat.

The US recognition of Rabat’s claim over Western Sahara as the political barter between Rabat and Washington, which led to the normalization with Tel Aviv, shall eventually prove meaningless.

The US and Western superiority is increasingly being challenged throughout the African continent, especially in West and Central African regions. Powerful new players, like Russia and China, are gaining geopolitical ground, in some regions entirely replacing the West’s dominance. Thus, the US support for any country’s territorial ambitions is no longer a guarantor of political gains, especially as the African geopolitical spaces have become greatly contested.

When Morocco normalized with Israel, many Moroccans were taken by surprise. The assumption was that Morocco, like other Arab nations, was too consumed by their own problems to notice their government’s foreign policy shifts, whether regarding Palestine or anywhere else.

Whether that was the case or not, it matters little now. On the second anniversary of the “Joint Declaration” agreement, tens of thousands of Moroccans demonstrated against normalization in 30 different cities, including Rabat, Agadir, Tangier and Meknes. The protests were mobilized by the Moroccan Front for Supporting Palestine and Against Normalization.

The Front is reportedly a network that includes ‘over a dozen political and human rights organizations,’ the New Arab reported. Their chants included “The people want to bring down normalization”, a slogan that is reminiscent of the pan-Arab popular slogan of a decade ago, ‘The people want to change the regime’. The latter resonated throughout many Arab capitals during the years of political upheaval in 2011 and upward.

This popular movement and its chants indicate that Palestine remains a local and national struggle in Morocco, as well as other Arab countries.

But why Morocco, and why now?

The popular association of the Moroccan and Palestinian flags throughout the World Cup had an invigorating effect on the collective psyche of Moroccans, who were empowered by their national team’s impressive showing against legendary teams such as Belgium, Spain and Portugal. It was a matter of time before this confidence translated to actual solidarity on the streets of Rabat and other major Moroccan cities.

The fact that Moroccans are mobilizing in large numbers against their country’s normalization with Israel only two years after the agreement is a sign of things to come.

2022 was a particularly bloody year in Palestine, according to UN Mideast Envoy, Tor Wennesland, who said that it was “on course to be the deadliest year for Palestinians in the West Bank since … 2005.”

Moroccans, like other Arab nations, are following the news with alarm, especially following the swearing-in of Israel’s new extremist government of Benjamin Netanyahu and his far-right fascist ilk – the likes of Bezalel Smotrich and Itamar Ben-Gvir.

These two individuals’ constant targeting of Al-Aqsa Mosque, in particular, has a great emotional impact on Moroccans, especially since Morocco serves as the Chair of the Al-Quds Committee of the Organization of Islamic Cooperation, which is tasked with the protection of Al-Aqsa Mosque.

Israel wants to normalize with the Arabs and tap into their massive markets and economic largesse without having, in return, to relinquish its military Occupation or grant Palestinians basic freedoms. Politically engaged Arab masses understand this well, and are growingly mobilizing against their governments’ betrayal of Palestine.

The self-serving and limited gains of normalization will likely turn into a political liability in the coming years. It is time for Morocco and others to reconsider their ties with Israel, as they risk political isolation and social instability, a far greater price to pay than the empty promises of Washington and Tel Aviv.

Feature photo | Boys with painted faces of the flags of Morocco and Palestine watch intently the live broadcast of the FIFA World Cup quarter-final match between Morocco and Portugal, which was held in Qatar, at Saad Sayel Sports Hall in Gaza City. Yousef Masoud | Sipa via AP Images

Dr. Ramzy Baroud is a journalist, author and the Editor of The Palestine Chronicle. He is the author of six books. His latest book, co-edited with Ilan Pappé, is ‘Our Vision for Liberation: Engaged Palestinian Leaders and Intellectuals Speak out’. His other books include ‘My Father was a Freedom Fighter’ and ‘The Last Earth’. Baroud is a Non-resident Senior Research Fellow at the Center for Islam and Global Affairs (CIGA). His website is www.ramzybaroud.net