The long expected Russian offensive in Ukraine has begun.

The Ukrainian army, egged on by its U.S. controllers, had put most of its resource into the static defense of the Bakhmut (Artyomovsk) – Soledar sector of the eastern front. An insane number of Ukrainian brigades, though many partially depleted, were concentrated on that 50 kilometer long front. This left other sectors nearly empty of Ukrainian troops. 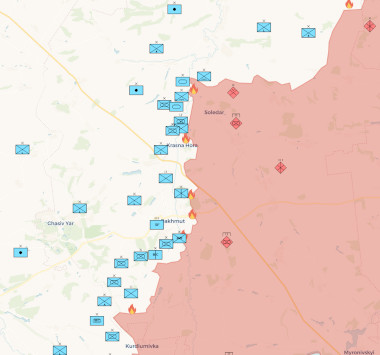 I count the equivalent of some 27 brigade size formations in that area. The usual size of a brigade is some 3,000 to 4,000 men with hundreds of all kinds of vehicles. If all brigades had their full strength that force would count as 97,500 men. In a recent interview the Ukrainian military commander Zaluzhny said that his army has 200,000 men trained to fight with 500,000 more having other functions or currently being trained. The forces which are currently getting mauled in the Bakhmut area constitute 50% of Ukraine’s battle ready forces.

On the southern and northern sectors of the battle-line the Ukrainian forces have been thinned out and are only able to defend against minor forces.

The Ukrainian forces in the north and south are in the same position Russian troops had been in when the Ukrainian army last year launched a blitz attack in the Kharkiv region. The Russian screening force of some 2,000 boarder guards and federal police retreated and used its artillery to destroy the oncoming Ukrainian forces. The attack ran out of power and came to a halt after progressing some 70 kilometers on a rather large front. But Ukraine no longer has, unlike the Russians at that time, the artillery that is need to stop a larger thrust.

The big Ukrainian concentration in Bakhmut is now in an operational encirclement. The Russian forces have progressed north and south of the city and their artillery can easily control the western exit roads of Bakhmut. This a Verdun like situation. Russian artillery is by far numerical superior and can slaughter the Ukrainian troops at will. Even the U.S. military is now suggesting that Ukraine should give up on that city. Should the government in Kiev agree to that it will be a retreat under fire with likely high casualties. Not retreating though will make things even worse. 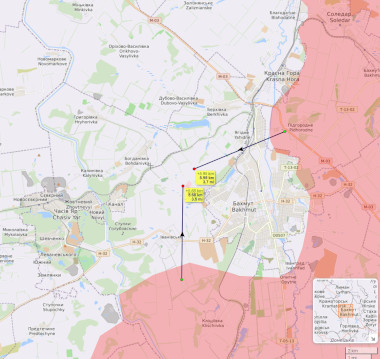 The Ukrainian concentration on Bakhmut put its other frontlines into jeopardy. I and others have suggested for quite some time that the Russian forces will use the southern Zaporizhia region for a large thrust into the far back of the Ukrainian forces around Bakhmut.

The Russian moves against the third and fourth Ukrainian defense lines will likely be supported by a move from the south that will liberate the rest of the Zaporiziha and Donetsk oblast.

Aside from those operations the Russian command has sufficient number of troops available to run another major attack. This could come from the north into the Kharkiv region behind the Ukrainian troops currently attacking the Russian lines further east. 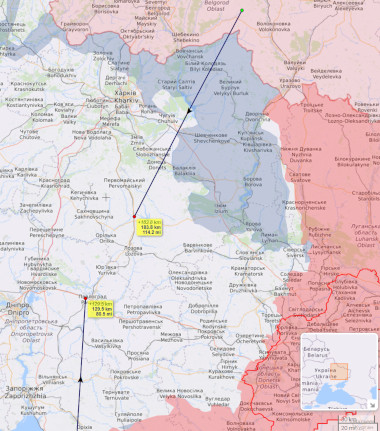 The Military Land Deployment map, sympathetic to the Ukrainian side, shows just three Territorial Defense brigades covering a 100 kilometer long southern defense line. These brigades are infantry rich but not mobile. They have only little heavy equipment. The Ukrainian 65th Mechanized Brigade is the only capable force in the area. It is screening Zaporizhzhia city but has been heavily bleeding it its position for quite a while.

One Motorized Infantry brigade, the 56th, was added to the southern front some six days ago. Back in August this brigade had been severely mauled in its defense of Peski at the eastern front. It has since been reconstituted with new conscripts and a smorgasbord of ‘western’ delivered equipment. It can not be regarded as a fully capable unit. 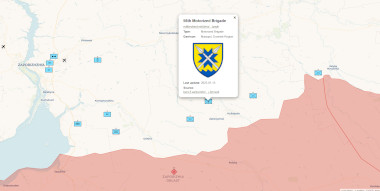 There is no Ukrainian artillery brigade in the sector. There are thereby no counter-artillery capabilities available.

The attacking Russian force is the 58th army of the Russian Federation. These are not lightly armored, air deployable VDV forces like those who fought around the Hostomel Airport airport near Kiev. These are not militia of the Donbas republics seen on the eastern front. These are not Chechen forces storming Mariupol. These are not the Wagner mercenaries surrounding Bakhmut.

This is the real Russian army, the Red one, with all its heavy resources and capabilities to wage combined arms warfare.

The first probing Russian attacks in the area were launched two days ago. The Ukrainian lines immediately broke down and the Russian forces advanced some 5 kilometer on the very first day. Yesterday they advanced further.

Everything in red and yellow north of the closed red line are recent Russian advances. 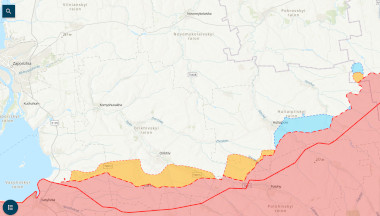 A few weeks ago, in an interview with the Economist, the Ukrainian army commander general Zaluzhny called a Russian attack at this time the “worst” possible situation:

But the main reason Russia has dragooned so many young men, the generals believe, is to go back on the offensive for the first time since its bid to overrun Donbas fizzled out in the summer. “Just as in [the second world war]…somewhere beyond the Urals they are preparing new resources,” says General Zaluzhny, referring to the Soviet decision to move the defence industry east, beyond the range of Nazi bombers. “They are 100% being prepared.” A major Russian attack could come “in February, at best in March and at worst at the end of January”, he says.

Zaluzhny has claimed to be building reserves but he has since send even more troops to Bakhmut:

The temptation is to send in reserves [to Bakhmut]. A wiser strategy is to hold them back.
…
“May the soldiers in the trenches forgive me,” says General Zaluzhny. “It’s more important to focus on the accumulation of resources right now for the more protracted and heavier battles that may begin next year.”

It is unlikely that any reserves he currently has are equipped, trained and battle ready. They will be too small to stop a fully mechanized Russian attack through the rather sparsely settled southwest of Donetzk province.

The aim of the Russian thrust in the south will not be to take cities like Zaporiziha. The aim is to bring the main transport routes, railways and roads, from west-Ukraine to the front in east Ukraine under Russian artillery fire. This will prevent not only the re-supply for the Ukrainian troops on the eastern front but also their exit from the front line. A 100 kilometer (60 miles) thrust to the north would mostly do that. A complementary thrust from the north towards south, which may or may not be coming, would finally close the cauldron.

—
Twice a year I ask my readers to contribute to Moon of Alabama. Please donate here.