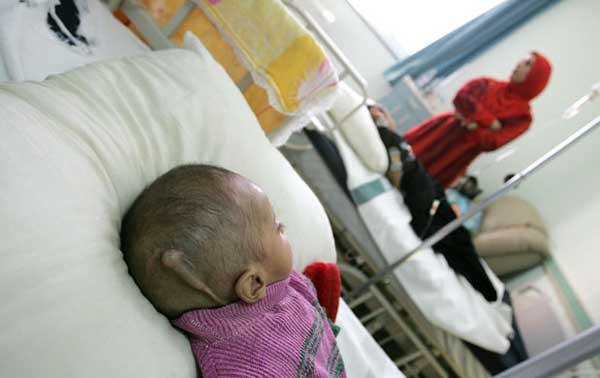 Dr. Chris Busby, a world famous UK based physicist, was at the UN last week with the results of his health survey of the city of Fallujah, Iraq.

The results were truly astonishing, even to the jaded eyes of UN representatives, old retired war fighters and politically connected bureaucrats. No armed force had accomplished this level of death and disease in a civilian population before.

What Weapons Can Do That?

There it was in black and white, on paper, from an internationally respected physicist – the utterly unbelievable, but certified results: Fallujah’s leukemia rate was 38 times higher than Hiroshima after the US Atomic Bombing in 1945. The questions were fast and furious.

Many diplomatic representatives were probably wondering how their government could get some of those weapons, though they had no idea what the weapons were. Neither do I.

This is a whole ‘nother level of warfare, to paraphrase Maj Doug Rokke, USArmy, Ret., former Director of the Pentagon’s Depleted Uranium Project. The US Army and Marines visited upon the isolated, small Iraqi city of Fallujah, somehow, 38 times the killing and cancer causing power of the Atomic Bomb that devastated Hiroshima 65 years ago. That is a big improvement in war fighting lethality. What on Earth did you guys use?

The Livermore Nuclear Weapons Lab in California and the Lethality Center at Picatinney Aresenal in New Jersey were most certainly involved, among others, in this monumental breakthrough in war fighting capability. This is a really big deal! War fighting is all about delivering death and disease to the enemy population and enemy war fighters.

Was Fallujah a “Field Test” for New Nuclear Weapons?

A reliable “Cancer Bomb” that nations can deploy while the whole world is watching is a long sought after Holy Grail of the US Weapons Program. A “Cancer Bomb” that politicians and Generals can deploy with arguable deniability, as if it was just another conventional weapon, would be absolutely Priceless to War Makers, War Planners and War Targeters at the Pentagon. They have long dreamed of just such a weapon.

The Cancer Bomb Results in Fallajuh do look like the answer to many a War Planners’ Prayer. This is a good report from Dr. Busby. I highly recommend it to all you guys at the Pentagon, gals too. This is the answer to your Prayers.

It is not so good for ordinary grunts slogging through house-to-house urban warfare. The distinction between targeted civilian and US grunt is non-existent. This stuff does not discriminate. It just kills, or sickens with death as the exit strategy.

Why, even the Roman Catholic Church and the Pope endorse whole heartily the concept of slaughtering people and leaving the legacy infrastructure and buildings standing. “In 1979, Pope John Paul II conferred on … Sam Cohen a peace medal for his invention, the neutron bomb.” (1)

What weapons did you use, guys? It would seem that the logical choices are dialed down B61-11 nuclear weapons set to less than 5 kt to cover up their use. Fourth Generation nuclear weapons for heavy neutron doses to the civilian population and other rumored neutron weapons. Doctors have told us that heavy neutron warfare would produce these disease and cancer characteristics and Male/Female sex ratio changes. What else did you use?

Here’s the results, all scientific like, of what you guys did.

Normally the sex ratio in human populations is a constant with 1,050 boys born to 1,000 girls. This is disturbed if there is a genetic damage stress. The ratio of boys to 1,000 girls in the 0–4, 5–9, 10–14 and 15–19 age cohorts in the Fallujah sample were 860, 1,182, 1,108 and 1,010 respectively suggesting genetic damage to the 0–4 group (p < 0.01). Whilst the results seem to qualitatively support the existence of serious mutation-related health effects in Fallujah, owing to the structural problems associated with surveys of this kind, care should be exercised in interpreting the findings quantitatively.

* Sources and Notes are an integral part of the article. Include when distributing.