Twin car bombs carried out by the Western-backed so-called “rebels” have killed dozens of civilians in a Christian-Druze neighborhood in Damascus, highlighting the sectarian extremism, not “democratic” aspirations, as well as the level of depravity, driving opponents of the Syrian government. Immediately after the explosions, and as casualty figures began trickling in, Associated Press (AP) attempted to spin and downplay the act of terrorism, claiming in its report, “Twin car bombs kill 20 in Syria, hospitals say,” that:

Excusing egregious acts of terrorism aimed at Syria’s civilian population by claiming those targeted were “mostly loyal to President Bashar Assad” has been a favorite tactic of AP, BBC, CNN, Fox News, and others. In reality, the vast majority of Syrians, from Christians to Druze, from Shia’a Muslims to moderate Sunnis, are targets of the sectarian extremist, Saudi-Wahhabi indoctrinated terrorists the US, Israel, and Saudi Arabia have been funding, arming, importing from across the region, and arraying against the people of Syria since at least 2007. 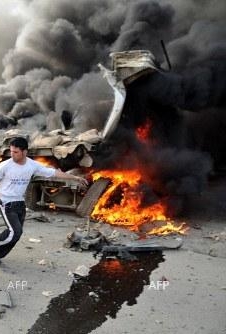 The terrorists in Syria have recently received a boost by the West, arranging for them a political front in Doha, Qatar to act as the reasonable “face” for their armed terrorism, portraying the premeditated destabilization by foreign terrorists as an indigenous struggle for “freedom and democracy.” Already, even that front has suffered setbacks, as its newly US-Qatari appointed leader, Moaz al-Khatib, has been revealed as not only involved with Western oil corporations, but also has declared on Al Jazeera his intentions of establishing an “Islamic state.”

Clearly, blowing up a neighborhood full of Christians and Druze would fall in line with just such a plan, driving yet more of Syria’s diverse population beyond its borders to live as permanent refugees – not with alleged plans of “freeing” the country, or gracing a multicultural society that has lived together for centuries with “democracy.”

To reiterate, the US, Israel, and Saudi Arabia had planned as far back as 2007 to specifically use sectarian extremists to overrun and overthrow Syria. This was revealed in a report published by Pulitzer Prize-winning journalist, Seymour Hersh, titled “The Redirection.” Citing US, Saudi, and Lebanese officials, as well as former US intelligence agents, Hersh reported:

“To undermine Iran, which is predominantly Shiite, the Bush Administration has decided, in effect, to reconfigure its priorities in the Middle East. In Lebanon, the Administration has coöperated with Saudi Arabia’s government, which is Sunni, in clandestine operations that are intended to weaken Hezbollah, the Shiite organization that is backed by Iran. The U.S. has also taken part in clandestine operations aimed at Iran and its ally Syria. A by-product of these activities has been the bolstering of Sunni extremist groups that espouse a militant vision of Islam and are hostile to America and sympathetic to Al Qaeda.” –The Redirection, Seymour Hersh (2007)

Hersh’s report would also include:

“the Saudi government, with Washington’s approval, would provide funds and logistical aid to weaken the government of President Bashir Assad, of Syria. The Israelis believe that putting such pressure on the Assad government will make it more conciliatory and open to negotiations.” –The Redirection, Seymour Hersh (2007)

Clearly, that is exactly what is playing out now in Syria, despite the Western media’s best efforts to portray otherwise. The US Army’s own reports indicate that very hotbeds of violence in Syria today, match precisely with 2007 identified Al Qaeda-Muslim Brotherhood epicenters that were supplying terrorists to Iraq to fuel similarly deadly sectarian violence there.

Image: (Left) West Point’s Combating Terrorism Center’s 2007 report, “Al-Qa’ida’s Foreign Fighters in Iraq” indicated which areas in Syria Al Qaeda fighters filtering into Iraq came from. The overwhelming majority of them came from Dayr Al-Zawr in Syria’s southeast, Idlib in the north near the Turkish-Syrian border, and Dar’a in the south near the Jordanian-Syrian border. (Right) A map indicating the epicenters of violence in Syria indicate that the exact same hotbeds for Al Qaeda in 2007, now serve as the epicenters of so-called “pro-democracy fighters.”

Additionally, the sectarian nature of these Western-backed terrorists was also warned against in Hersh’s 2007 report, specifically noting that if the plan went ahead, a sectarian bloodbath would ensue – and those hit hardest would include the Levant’s Christian populations. Hersh would report:

“Robert Baer, a former longtime C.I.A. agent in Lebanon, has been a severe critic of Hezbollah and has warned of its links to Iranian-sponsored terrorism. But now, he told me, “we’ve got Sunni Arabs preparing for cataclysmic conflict, and we will need somebody to protect the Christians in Lebanon. It used to be the French and the United States who would do it, and now it’s going to be Nasrallah and the Shiites” –The Redirection, Seymour Hersh (2007)

Clearly this threat has now expanded over to neighboring Syria’s Christian populations. Western-backed terrorism has already targeted Christians across Syria, as reported in the LA Times’ “Church fears ‘ethnic cleansing’ of Christians in Homs, Syria,” as well as in USA Today’s distorted, but still telling, “Christians in Syria live in uneasy alliance with Assad, Alawites.” With the recent bombing of a Christian-Druze neighborhood in Damascus to add to the list, it is clear a concerted campaign of genocide is aimed at Syria’s many minorities by Western-backed sectarian extremists – on record, purposefully arrayed against Syria for this very purpose.

Image: Libyan Mahdi al-Harati of the US State Department, United Nations, and the UK Home Office (page 5, .pdf)-listed terrorist organization, the Libyan Islamic Fighting Group (LIFG), addressing fellow terrorists in Syria. Harati is now commanding a Libyan brigade operating inside of Syria attempting to destroy the Syrian government and subjugate the Syrian population. Traditionally, this is known as “foreign invasion.”

The silence of the UN, as well as the continued covering up by Western media agencies regarding this premeditated genocide is an egregious crime against humanity, one becoming increasingly difficult to cover up. The fraud of NATO’s Libya intervention is now fully revealed, with Libya’s “freedom fighters” exposed as Al Qaeda thrust into power by Western arms, cash, and diplomatic recognition. In Syria, before the legitimate ruling government has been destroyed, the West’s “freedom fighters” are now revealed for what they truly are.