The catastrophic economic consequences of the ‘western’ proxy war with Russia are setting in. As a result the high inflation, caused by supply side constrains due to sanctions and far too much spending, will ruin the middle classes of many countries.

END_OF_DOCUMENT_TOKEN_TO_BE_REPLACED

Shadowy UK intel figure Hamish de Bretton-Gordon was at the forefront of chemical weapons deceptions in Syria. Now in Ukraine, he’s up to his old tricks again.

END_OF_DOCUMENT_TOKEN_TO_BE_REPLACED

The Biden Administration is sounding the alarm, announcing the imminent attack and the certain defeat of Russia. However, one by one, its main allies are pouting. For its part, Russia recalls its demands of December 17, 2021 (the respect of international law by the United States) and demonstrates its military superiority. The veil is about to be torn.

END_OF_DOCUMENT_TOKEN_TO_BE_REPLACED

Author’s note: This article was originally due to appear in Misinformation Review, the Harvard-based journal that published the piece it responds to. The editorial board accepted the article for publication, but because of the challenging nature of my critique, they decided it should be published under the rubric of a letter to the editor so as to allow a right of reply to the authors of the article criticised. Three weeks after it was sent out to those authors, I was informed that ‘we are unable to publish letters on our site at this time.’ [Submitted to Misinformation Review 22 August 2020; Accepted for publication 30 October 2020; notified of non-publication 30 November 2020.]

END_OF_DOCUMENT_TOKEN_TO_BE_REPLACED

While posing as a grassroots human rights organization, the World Uyghur Congress is a US-funded and directed separatist network that has forged alliances with far-right ethno-nationalist groups.

The goal spelled out by its founders is clear: the destabilization of China and regime change in Beijing.

END_OF_DOCUMENT_TOKEN_TO_BE_REPLACED

If the NATO summit this week marking the 70th anniversary of its foundation in 1949 was meant to be a resounding celebration, it backfired spectacularly, more as a resounding farce. Amid all the pomp and ceremony afforded by an official reception at Buckingham Palace, hosted by the British Queen, the two-day gathering descended into squabbling, sneering and back-stabbing.
END_OF_DOCUMENT_TOKEN_TO_BE_REPLACED

END_OF_DOCUMENT_TOKEN_TO_BE_REPLACED

Cotler’s campaigns for foreign regime change or intervention almost always march in lock-step with neoconservative U.S. foreign policy. His “humanitarian” branding is but a thin veneer of hypocrisy to conceal his establishment policies — policies that almost always serve the interests of Israel.

END_OF_DOCUMENT_TOKEN_TO_BE_REPLACED

(Donald Trump signed an executive order for new sanctions against Iran on June 24, 2019)

The US President Donald Trump is learning that Persian is a tricky language and does not easily yield its hidden charms to westerners. The western media attributed to Iran’s President Hassan Rouhani a remark during his televised speech on June in Tehran 25 to the effect that the White House is “mentally retarded.” But now folks with grounding in the intricacies of Persian language — who else but the BBC Monitoring in London — interpret differently.

END_OF_DOCUMENT_TOKEN_TO_BE_REPLACED

A summit of the national security advisors from the USA, Israël and Russia has been announced in Jerusalem. The aim of this conference is to untangle the imbroglio around the Axis of Resistance, guarantee the security of all the States in the Middle East, and establish a shared suzerainty of the United States and Russia over all the actors, including Israël. 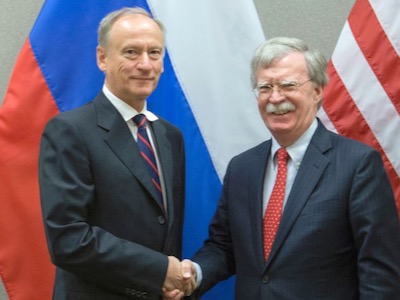 END_OF_DOCUMENT_TOKEN_TO_BE_REPLACED

Recent reports suggest that Trump’s National Security Advisor John Bolton, together with Secretary of State Mike Pompeo, are “doing everything possible to instigate a war with Iran”. Will they succeed?

Bolton-Pompeo are involved in deliberate acts of provocation. The Abraham Lincoln carrier strike group is currently en route to the Persian Gulf  “to send a clear and unmistakable message to the Iranian regime…”

END_OF_DOCUMENT_TOKEN_TO_BE_REPLACED 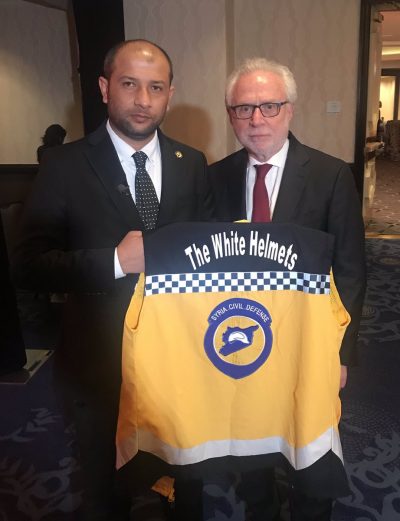 Increasingly, groups and even foreign governments have pandered to Israel and its supporters in the United States because they have come to understand that success in dealing with Washington can be dependent on Jewish support.

END_OF_DOCUMENT_TOKEN_TO_BE_REPLACED

It was the eleventh, and perhaps the most important meeting between President Putin and PM Netanyahu on 27 February, writes the well-informed journalist, Elijah Magnier: “The Israeli visitor heard clearly from his host that Moscow has no leverage to ask Iran to leave – or, to stop the flow of weapons to Damascus … Moscow [also] informed Tel Aviv about Damascus’s determination to respond to any future bombing; and that Russia doesn’t see itself concerned [i.e. a party to such conflict] ”.

END_OF_DOCUMENT_TOKEN_TO_BE_REPLACED

The newly launched ‘NATO Mission in Iraq’ has a clear geo-political underpinning to it which aims to disturb the delicate edifice of peace that Russia, Turkey and Iran have been building for last two years or so. Although the new mission has been announced at a time when the US president has already announced a potential withdrawal of US troops from Syria, the new mission rather explains the counter-narrative of ‘no policy change’ that the various US officials have been building ever since Trump’s announcement of troop withdrawal. The new NATO Mission in Iraq is thus a plan according to which the US is going to shift its base of regional geo-politics from Syria, where the Russians, Turks and Iranians have already established their own stronghold, to Iraq, a country that has still not recovered from the damages inflicted on it first by the US invasion and then by ISIS. Iraq, accordingly, is going to become the new theatre of regional geo-politics.

END_OF_DOCUMENT_TOKEN_TO_BE_REPLACED

Thursday’s resignation of US Defense Secretary James Mattis has provoked a reaction of panic and near hysteria from leading members of both major political parties, the media and former top military and intelligence officials.

END_OF_DOCUMENT_TOKEN_TO_BE_REPLACED

Team Trump missed the summit on Syria. In that, Patrick Lawrence sees another sign of Washington’s failure to accept its loss of diplomatic primacy.