May 5, 2014 (Tony Cartalucci – NEO) – After the brutal massacre of over 40 anti-regime protesters in the southern port city of Odessa – most of whom were burned to death after being trapped within the city’s Trade Unions House – the Western narrative of “Russian aggression” driving the current unrest in Ukraine is ringing particularly hollow.

Unable to spin the massacre carried out by the very ultra-right Neo-Nazi mobs that propelled the current unelected regime into power, both the West’s media machine and its politicians have attempted to remain as ambiguous as possible regarding the recent brutality resulting from what Kiev calls “anti-terror” operations.

The US condemned the violence in Odessa, but failed to identify the provocateurs or assign blame and instead called for an “investigation” into the deaths – the diplomatic equivalent of shrugging one’s shoulders. This response comes in sharp contrast to the West’s politically motivated responses to alleged government-sanctioned violence elsewhere in the world, most notably in Libya in 2011, and currently in Syria.
Additionally, as evidence emerges regarding the details of the Odessa massacre, only Russian news sources are covering it, while the West neither confirms nor denies reports, but rather misinforms its audiences through lies of omission. A particularly damning RT report titled, “Radicals shooting at people in Odessa’s burning building caught on tape,” stated:

New video has emerged online which shows a man shooting at the windows of Odessa’s burning House of Trade Unions. At least 39 anti-government activists died in the flames on May 2 in the building besieged and set ablaze by radicals.

A man in the video is wearing a bulletproof vest and is shooting several times in the direction of the burning House of Trade Unions.

The article would also report that:

Another video of the same man shows him speaking on the phone passionately arguing that he and his people are unarmed, while having to confront armed anti-government protesters. The man introduces himself as sotnik Mykola (“sotnik” is what Maidan group leaders in Kiev call themselves).

The report, complete with multiple videos and photographs, portrays a massacre of horrific and intentional brutality, trapping anti-regime protesters inside a building, torching it, and firing at the victims as they attempted to escape from being burned to death. The US’ calls to “investigate” the deaths and its refusal to acknowledge that the regime it has elected to back was responsible for the massacre, only further weakens its hand as the crisis continues to unfold.

In response to the violence in Odessa, Ukraine’s unelected prime minister Arseniy Yatsenyuk, has blamed his own security forces for the violence. The BBC reported in its article, “Ukraine unrest: PM blames security service over Odessa,” that:

Some 42 people died in Odessa on Friday, most of them in the fire at the Trade Unions House, where separatist protesters had barricaded themselves in following running street battles with pro-Kiev activists.

Mr Yatsenyuk said the security service and law enforcement office had done “nothing to stop this crackdown”, saying they were “inefficient and they violated the law”.

The police chief of the Odessa region had been removed, he said, and the prosecutor’s office had started an investigation into “every single police officer”.

However, the new police chief appointed for Odessa only further confirmed the identity of the attackers that left over 40 dead while revealing the regime’s complicity in both the massacre and a wider agenda of coordinating with ultra-nationalists like the Neo-Nazi Right Sector faction. In RT’s article, “Newly appointed Odessa police chief vows to revise release of anti-Kiev activists,” it states:

Addressing a pro-Kiev rally, Odessa’s new head of police spoke against ‘separatism’ and vowed to revise the earlier release of pro-autonomy activists.

Ivan Katerinchuk was appointed following deadly clashes and a fire on Friday that killed dozens in the southeastern port city.

Local media reported that a few hundred people attended the rally near the Odessa interior ministry on Sunday. Some of them were heavily armed with wooden and metal bats, chains, shields, and helmets.

When speaking about the 67 released anti-government activists, he said that all will be investigated and it will be determined if they broke any laws.

He called on the Right Sector to exercise restraint and select individuals who will represent the group in order to easily communicate with it about further actions from police.

Clearly Right Sector, the Neo-Nazi militant front that spearheaded the so-called “Euromaidan” protests and the resulting putsch, are present in Odessa and working in coordination with Ukrainian security forces loyal to the regime in Kiev. This includes both the outgoing and the newly appointed police chief of Odessa. The Western media has not attempted to refute RT’s reports, and instead has elected to avoid mentioning altogether any relevant developments related to the Odessa massacre.
Wave of Fury Sweeps Ukraine 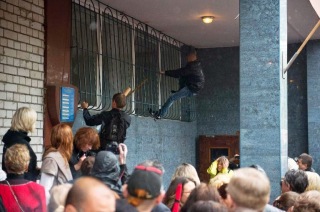 Over 60 anti-regime protesters who escaped the Trade Unions House blaze were arrested in addition to the 40 plus killed by Right Sector and other pro-regime factions in Odessa. After the massacre, anti-regime sentiment reached a fevered pitch. Protesters stormed the Odessa police station holding the survivors arrested earlier, prompting security forces to release them. While the newly appointed police chief of Odessa vows to “revise” the releases, it appears the city he resides over is divided and that further attempts to reassert Kiev’s control there will only result in more violence.
Meanwhile, the positions of anti-regime protesters elsewhere across the country have only hardened. Eastern cities like Slavyansk are standing firm against full-scale military operations launched by the regime in Kiev to consolidate their power across the rest of the country. Heavily armed gunships, armored vehicles, and special forces have been operating around the edges of towns and cities in the east of Ukraine, but have thus far been unable to enter them. The Western media, eager to report on progress made by Kiev, can only report on outer checkpoints and remote positions being taken by security forces.

The BBC’s Sarah Rainsford, in the regional capital, Donetsk, says that while it appears the Ukrainian forces have sealed off the roads in and out of the town, they are moving around it and concentrating on smaller towns nearby.

Lacking a cohesive military, Kiev has heavily depended on militant groups like Right Sector. Reeling from negative headlines since the height of the “Euromadain,” the regime is now attempting to portray Neo-Nazi militant groups as “football hooligans” operating beyond their control – even as officials like Odessa’s new police chief openly calls for closer coordination with them.

This is a familiar formula used across much of Europe’s racist, bigoted, nationalist movements, many of which are closely affiliated with Neo-Nazi groups active in Ukraine. The English Defense League (EDL), for example, draws direct parallels with Neo-Nazism, so much so that its own founder abandoned the movement after claiming it was in fact co-opted by Neo-Nazis. In the The Times article, “EDL chief Tommy Robinson quits after ‘neo-Nazi hijack of group’,” it states:

Tommy Robinson, the founder of the English Defence League, unexpectedly quit the organisation yesterday after claiming that it had been hijacked by extremists, including neo-Nazis.

The EDL’s composition of football hooligans and Neo-Nazis is repeated elsewhere. In a January 2014 Spiegel Online article titled, “‘Prepared to Die’: The Right Wing’s Role in Ukrainian Protests,” it described Ukraine’s Svoboda Party in relation to other Neo-Nazi groups across Europe:

The Svoboda party also has excellent ties to Europe, but they are different from the ones that Klischko might prefer. It is allied with France’s right-wing Front National and with the Italian neo-fascist group Fiamma Tricolore. But when it comes to the oppression of homosexuality, representative [Igor] Myroshnychenko is very close to Russian President Vladimir Putin, even if he does all he can to counter Moscow’s influence in his country.

In the coming days and weeks, Right Sector and Svoboda’s militant street front will continue coordinating with Kiev’s more heavily armed security forces in an attempt to consolidate its power across much of Ukraine. Already, the unelected government has declared its intention to deploy “special forces” to Odessa to rectify what it calls an “outrageous failure” to stop anti-regime protesters. This indicates that the “failure” was not the loss of life during clashes, but the failure to crush anti-regime sentiment across Odessa.

The regime and its Western sponsors will attempt to cover up, spin, and otherwise disassociate themselves from the inevitable atrocities that will be carried out as they attempt to do so. Portraying Neo-Nazi militants as “football hooligans” that are spontaneously taking to the streets and “coincidentally” helping Kiev eliminate its political opponents appears to be the narrative of choice and will almost certainly lead to both more incidents like the massacre in Odessa, and a greater backlash against the unpopular, struggling regime in Kiev.