2 June 2016 — The Wolf Report: Nonconfidential analysis for the anti-investor

1.  While the European Union tries to “kettle” refugees in Turkey, turn them back to Libya before they reach international waters, struggles to reign in Italy and its navy which has committed the unpardonable sin, according to the EU, of upholding the law of the sea by insisting on rescuing people at risk on the sea, even where and when those people are of darker skin and a different religion than the EU finds admissible; while the European Union contorts and distorts its own refugee policy to deny safe haven to those fleeing barrel bombs, militias, armies, automatic weapons, air strikes waged, supplied, supported in part, by the very same countries that make up the EU; the big worry, apparently, for some socialists in the United Kingdom is that a majority of people in Great Britain might actually vote to leave this confederation of capitalists; this union of exploiters; this common market designed to flatten every particular impediment to the accumulation of capital.
END_OF_DOCUMENT_TOKEN_TO_BE_REPLACED 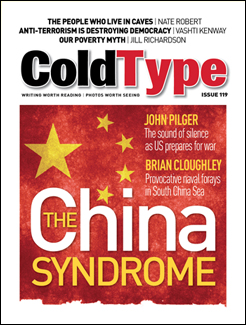 The CHINA SYNDROME: What’s the US playing at with its naval forays into the South China Sea – is a new world war on its agenda? ask John Pilger and Brian Cloughley in this issues cover stories. In other features, Vashti Kenway’s has the story behind Australia’s new law on thought crimes, Jonathan Cook tells how religious zealots are taking over Israel’s army, Rick Salutin wonders why Canada’s top journalists seem to be against the idea of electoral reform, and Sam Pizzigati hits out at the cosmic tax gap between America’s rich and poor. We’ve also got photo stories from John Cohen and Nate Robert, a new taxi tale by Dell Franklin, and much more