The Neo-Con “West” And Global Destruction. A “New World Order” of Globalized Despair

The neo-con “West” and its allies want to destroy the Middle East so that they can control the Middle East. Under the auspices of their imperial “New Middle East” project, the criminals (U.S–led NATO, the Gulf Cooperation Council (GCC), and Israel, are targeting everything that they falsely profess to cherish.

END_OF_DOCUMENT_TOKEN_TO_BE_REPLACED

Cults of Security and Terror: Fear Ahead of the Rio Olympic Games

The Olympics remains a black hole of needless expenditure, sucking services into it with impending and merciless doom. Unused stadia, tracks left to moulder, services supposedly linked to urban renewal turned into dilapidated wonders. That is the Olympic legacy in its lingering aftermath.

END_OF_DOCUMENT_TOKEN_TO_BE_REPLACED 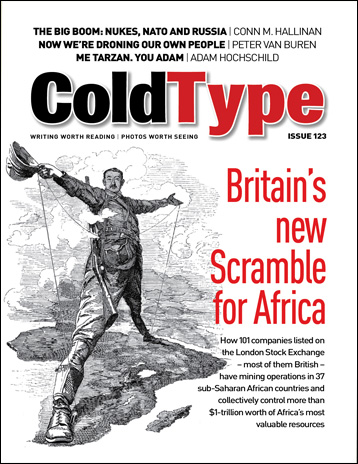 SPECIAL MID-SUMMER ISSUE: We’ve got a great collection of features this month. Top of the list is Colin Todhunter’s revealing tale of corporate capers as British companies grab Africa’s energy and mineral resources. Then we’ve got Conn Hallinan’s dire warning of impending nuclear misfortune if the US and NATO don’t take a more temperate approach to Russia.

END_OF_DOCUMENT_TOKEN_TO_BE_REPLACED

2. ‘The City: London and the Global Power of Finance’ with Tony Norfield
3. ‘An Unreliable Guide to London’ with readers Tim Burrows, Juliet Jacques, Stephen Thompson + editors Gary Budden, Kit Caless
4. ‘Social-Democracy and Anarchism: In the International Workers’ Association, 1864-1877’ with René Berthier
5. ‘Betraying a Generation: How Education is Failing Young People’ with Patrick Ainley
6. ‘The 21st Century Revolution: A Call to Greatness’ with Bruce Nixon
7. ‘The Truth About Trident: Disarming The Nuclear Argument’ with Timmon Wallis
END_OF_DOCUMENT_TOKEN_TO_BE_REPLACED

You can also access as a pdf  file here: http://www.statewatch.org/news/2016/jul/e-mail-gen-july.pdf

Barack Obama is “responsible for the biggest escalation in the history of the one-sided war against Black America. He increased militarization of local police 24-fold before banning some kinds of Pentagon weapons transfers, but is now preparing to send more battlefield weaponry to the streets of our cities. “Clinton or Trump will surely build on Obama’s lethal legacy.”

END_OF_DOCUMENT_TOKEN_TO_BE_REPLACED

“Get Money out of Politics”: DNC Emails Reveal a Corrupt and Unreformable Party and System

Amid a new scandal Debbie Wasserman Schultz was left no alternative but to step down from her role as the Chairwoman to the DNC, the Democratic National Committee, in seeking to sabotage Bernie Sanders’ challenge to Hillary Clinton for the nomination.

END_OF_DOCUMENT_TOKEN_TO_BE_REPLACED

Update: There are now 14,43o signatures. Government has to respond to all petitions that get more than 10,000 signatures but so far, three days in, there’s no sign of a response.

A new petition has been launched to bolster the campaign to hold Tony Blair to account by obtaining a House of Commons’ vote holding him in contempt of Parliament. It doesn’t get the murderer in court but at least it’s something. Get 100,000 signatures and they have to debate it in Parliament.

Wow. Bayer, BASF and Syngenta are suing the European Commission to overturn a ban on the pesticides that are killing millions of bees around the world.

A huge public push won this landmark ban — and we can’t sit back and let Big Pesticide overturn it while the bees vanish.

The UN sounded the alarm bells: Unless we act now, the bees are at risk of global extinction. We have to show Bayer and Co. now that we won’t tolerate them putting their profits ahead of our planet’s health.

END_OF_DOCUMENT_TOKEN_TO_BE_REPLACED

For months, Bernie Sanders supporters and surrogates have complained about unfair treatment from the Democratic National Committee—only to have these concerns dismissed by media observers as petulance and conspiracy-mongering:

END_OF_DOCUMENT_TOKEN_TO_BE_REPLACED

Meanwhile At The Democratic National Convention In Philly…

Just walked through a crowd of at least a couple hundred liberals and still haven’t seen a single Clinton sign.