UNITED NATIONS, September 18. /TASS/. Militants entrenched in Syria and activists of the White Helmets grouping continue conjuring up a provocation in the Idlib zone of de-escalation, the Russian Ambassador to the UN, Vasily Nebenzya said on Tuesday at a meeting of the UN Security Council that discussed the situation in Syria. 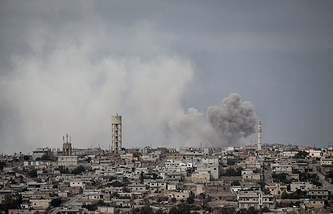 “Militants and activists of the White Helmets continue fabricating the sham scenes that will feature the alleged use of chemical weapons inside the Idlib zone of de-escalation,” he said.

“The filming of these fakes has already taken place in some Syrian districts,” Nebenzya said. “Notably, the organizers forced the Syrians abducted previously in Idlib and Aleppo Governorates to take part in the filming.”

“Also, we have the data suggesting that Jabhat al-Nusra [a terrorist grouping outlawed in Russia by a ruling of the Supreme Court – TASS] handed barrels with chlorine to Jaysh al-Izza grouping in Lataminah and Kafr Zita,” Nebenzya said. “Once again, we’d like to call attention to the fact. We’ve warned about it many a time.”

“We can see full well some of our partners are using Syria as a bridgehead for triggering a far more serious and dangerous conflict with more far-reaching consequences in the entire region,” the ambassador said. “In the light of it, we’d like to call once again for real collective efforts on all the conflict situations in the region and particularly in struggle with terrorism and for giving up the attempts to solve Syria’s problems behind its back.”.