On Sunday, a major international incident took place at the Kerch Strait which connects Crimea with mainland Russia, when a Russian border patrol ship stopped three Ukrainian Navy vessels from passing through the narrow waterway. The Russian authorities have accused the Ukrainian ships of illegally entering its territorial waters without prior notice, and instead attempting to force their way through. According to reports, Russian officers repeatedly hailed the Ukrainian vessels but calls were ignored by the Ukrainian Navy. This prompted Russia to fire upon the boats, before eventually seizing all three Ukrainian vessels including two gunboats and one tug boat. It is believed that at least four Ukrainian sailors sustained injuries during the four-hour affair, but they have since been given medical care and have been declared ‘out of danger.’

However, based on all of the circumstantial evidence prior to, and after this event, and particularly those moves made by leaders in Kiev and Washington DC, this incident appears to have been a planned provocation specifically designed to escalate diplomatic and military hostilities internationally. The detailed summary and timeline provided below will clearly substantiate this conclusion.

If this is indeed the case, then NATO and Kiev are playing an extremely dangerous game, one which threatens to trigger a major military conflict.

The altercation began when the Ukrainian vessels entered the restricted security zone, which was followed by a ramming incident where a Russian border patrol vessel struck the Ukrainian tug boat. Watch:

This was a serious international incident between two opposing countries who are ostensibly on war-footing with each other, and with NATO hovering in the background, more than prepared to escalate if required.

However, despite the geopolitical tensions present, this was still a relatively minor incident compared with other regional flashpoints in the past, like Georgia’s reckless attack on South Ossetia in 2008 – which triggered Russian retaliation and a bloody battle which ensured.

However, a quick appraisal of some key events before this incident, as well as adroit moves made immediate after by Kiev, indicate that this was very likely a planned provocation used to escalate the situation in Ukraine and increase geopolitical tension…

The incident took place in Russian-controlled the Kerch Straits, with the Ukrainian boats traveling from the Black Sea into the Azov Sea. Crimea recently left the Ukraine and joined the Russian Federation in 2014, although this move is still contested by the Ukraine and its backers in Washington and Brussels. In 2015, Russian began construction of the Crimea Bridge which joins Crimean peninsula to mainland Russia, which was completed in spring of 2018. The disagreement over this status is being used by Kiev and NATO to test international law and Russian territorial control in and around the two country’s shared water ways. Russian maintains that the three Ukrainian Navy vessels were in violation of Articles 19 and 21 of the UN Convention on the Law of the Sea, by illegally crossed the Russian maritime border without proper authorization in a security sensitive zone.

In response to the incident on Sunday, Russia parked a large tanker under the bridgewhich effectively blocks all naval traffic to and from the Azov Sea (pictured above).

Perhaps the most telling indication this was staged provocation, most likely coordinated by NATO, was how fast the Ukrainian president declared Martial Law. Considering how relatively minor this incident was, it seems somewhat outrageous that Kiev would place the country on war footing, and close-down society. President Petro Poroshenko summoned his war cabinet on Sunday to call for an emergency meeting of the United Nations Security Council over the supposed “attack” of Russia. Then on Monday, Ukraine Parliament voted overwhelmingly to impose Martial Law lasting for 30 days. This comes ahead of the Ukrainian elections where Poroshenko is performing badly in the polls, currently in third place behind his competitors.

Resumption of hostilities in the Donbass

Immediately following the Kerch incident, the US-backed Ukrainian forces resumed heavy shelling of civilians in the Donbass. The timing of this does not appear to be a coincidence.

The shelling began at about 19:50 GMT, according to the correspondent. The Ukrainian army is using various weapons, including heavy artillery.

Prior to this, a relative ceasefire had held in the Donbass, and there was real talk among stakeholders that certain key benchmark objectives for Minsk Accords could now be met, with an aim to end hostilities in eastern Ukraine.

Kiev’s aggression in the Donbass follows on the heals of another uncanny coincidence from mid-November, which saw a Polish weapons firm supplying Kiev with some 23,000 60-mm mortar shells – to be used by Kiev against residents in the Donbass.

Like clockwork, Poroshenko, along with Poland’s President Andrzej Duda, have capitalized on the incident to demand that the EU enact “tougher Russia sanctions” following the Kerch incident. Press service states:

“President of Ukraine Petro Poroshenko had a phone conversation with President of Poland Andrzej Duda … The president of Poland expressed support for Ukraine and its actions. The interlocutors coordinated further steps concerning the Russian threat. Poroshenko and Duda also called on the EU to step up sanctions against Russia and bring this matter to the European Council.”

Predictably, and just in time for tomorrow’s G20 meeting in Buenos Aires, US war hawks in the Senate have demanded that US President Donald Trump increase military aid to the Ukraine.

“The Trump Administration must immediately increase security assistance to Ukraine, including the provision of lethal maritime equipment and weapons,” said US Senator Bob Menendez (D-NJ). “I urge President Trump to commit to these measures prior to his reportedly scheduled meeting with Vladimir Putin later this week at the G20.”

Menendez added that the US will aid the Ukraine to enforce its ‘maritime domain awareness’ and urge NATO to increase its provocative exercises in the Black Sea.

Menendez also added that the US must pass a law, “Defending American Security from Kremlin Aggression Act” in order to send a message to Moscow that America will not stand by and allow Russian military “aggression” and “political interference” in the world.

Also, prior to the weekend’s incident on Friday, the UK Defence Secretary, Gavin Williamson, announced he would be deploying more British troops to the Ukraine along with the HMS Echo naval vessel to the Black Sea in 2019 in order to demonstrate the UK’s support for “ensuring freedom of navigation” in the region. This, as US and British clamour in unison this morning invoking Ukraine’s “right to free passage through the Kerch Straits,” while decrying the Russian menace.

Prior to this, in March, NATO’s unofficial propaganda arm, the Atlantic Council ‘think tank’, began campaigning for the US to help “shore up Ukraine’s vulnerabilities in the Black Sea.”

Not surprisingly, NATO has ignored the specific details, security considerations and breach of maritime protocol which led to the said confrontation, and instead called for “Russia to ensure unhindered access to Ukrainian ports in the Azov Sea, in accordance to international law.”

This is perhaps the most telling piece of evidence: on Tuesday, 27 November 2018, the NATO Secretary General, Jens Stoltenberg, will be will meet with the Chairman of the Parliament of Ukraine (Verkhovna Rada), H.E. Mr. Andriy Parubiy at NATO Headquarters – and has signaled in advance that a major announcement might be made, but also that no questions from the press will be allowed afterwards.

“There will be no media opportunity,” says NATO.

Will NATO announce a fast-track application, or sign a memorandum of understanding with Kiev? One can only guess what will be announced at this meeting, but the answer could very well be yes, as analyst Arkady Savitsky from Strategic Culture explains here:

“Ukraine’s Constitutional Court green-lighted a bill on amending the country’s main law by enshrining into it the final goal of obtaining NATO and EU membership. The decision was announced the next day after the UK and Ukraine’s defense ministries made a joint statement, stressing the need to expand military cooperation. The defense chiefs agreed that Operation Orbital, the Army training program started in 2015, was a success to be continued at least till 2020. Instructors from the British Army, most of who have significant experience in participating in combat operations in Iraq and Afghanistan, have trained over 9,500 Ukrainian servicemen. An unspecified number of UK soldiers would be sent to train Ukrainian special forces and marines, in addition to the 100 personnel deployed currently in the country.”

Is all of this merely coincidence? Not likely.

In summary, based on a series of related events which have led up to this confrontation indicate that this was indeed planned provocation designed to escalate the situation in the region, edging the West closer to war with Russia.

Here is a brief summary of some of these key events:

The incident in question on Nov 25th…

Evidence of a Planned Provocation

According the Russia’s Federal Security Service (FSB), the provocation happened on direct orders by authorities in Kiev, and was coordinated by two officers from the Security Service of Ukraine (SBU) – who were actually aboard the ships involved in the incident.

“The coordination of the provocation was carried out by two SBU officers, who were on board of Ukrainian ships” said FSB, who reiterated that the evidence will be made pubic in due course.

According to Russian Deputy Envoy to UN, Dmitry Polyanskiy, the Ukraine had ‘pre-planned’ the provocation in Kerch Strait, which was ‘approved by west.’ He voiced these accusations at the UN Security Council on Monday.

“This provocation was preplanned, that is obvious. It was okayed by the Western states,” said Polyanskiy.

He added that this was a ploy by Poroshenko to cancel the upcoming presidential election and also accused the US of financing Ukraine’s rogue actions in order to ramp-up hostilities.

“The US used all means possible and put millions of dollars into Ukraine to push forward a political process to create division in Ukraine and pit two brotherly nations against each other,” he said.

On Monday, Kiev began to tone down its rhetoric, saying that the Ukraine wishes to settle the Kerch Strait incident peacefully in compliance with the UN Charter:

“Ukraine will seek to settle the row in a peaceful manner, as Article 33 of the UN Charter envisages. But we certainly reserve the option to exercise the right for self-defence, defined in Article 51 of the UN Charter,” Klimkin said at a briefing.

On the streets of Kiev and other cities, right-wing reactionary mobs were quickly mobilized to attack Russian diplomatic facilities. 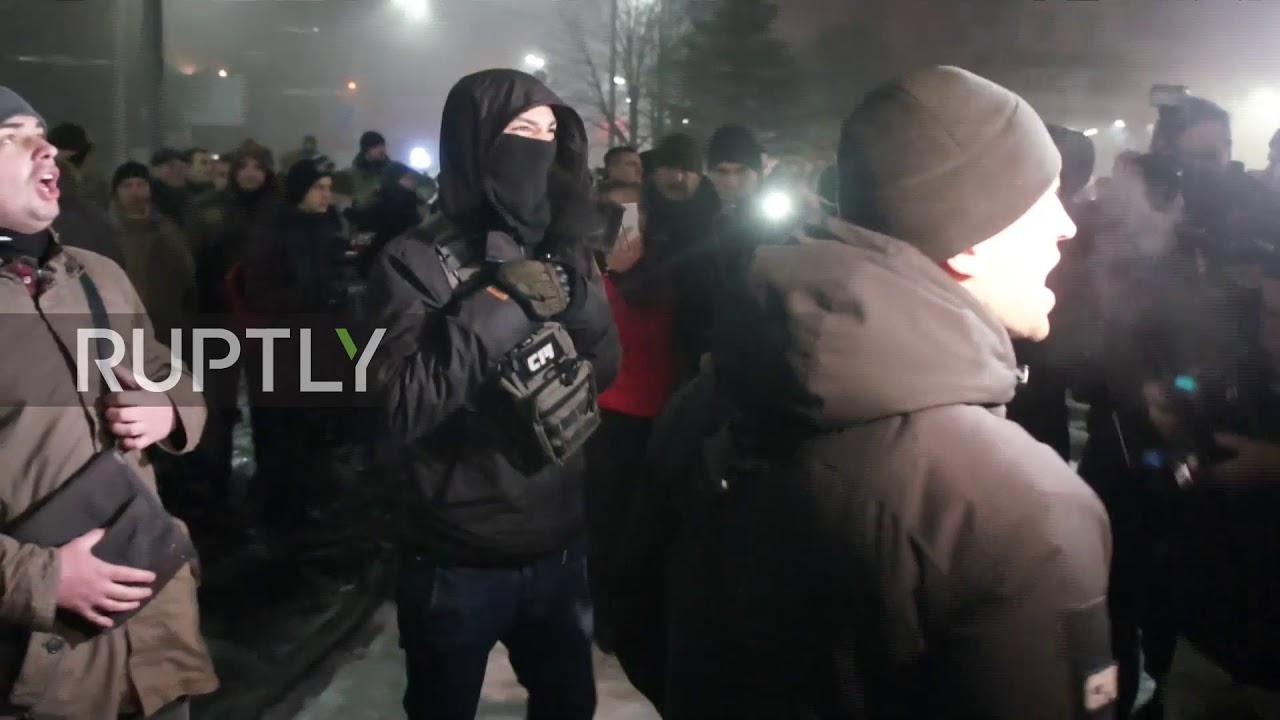 In Brussels, EU Spokesperson for Foreign Affairs Maja Kocijancic issued a statement encouraging all parties “to act with utmost restraint to de-escalate the situation immediately” and said the bloc expected “Russia to restore freedom of passage at the Kerch Strait.”

Expect more fighting talk from the US and NATO members in the coming days. Regardless, NATO and Kiev are playing a very dangerous game – and one which may pave the way beyond mere cold war concerns, but towards the unimaginable – a World War III scenario.