In 2015 the British Guardian appointed Katherine Viner as editor in chief. Under her lead the paper took a new direction. While it earlier made attempts to balance its shoddier side with some interesting reporting, it is now solidly main stream in the worst sense. It promotes neo-liberalism and a delves into cranky identity grievances stories. It also became an main outlet for manipulative propaganda peddled by the British secret services.

Its recent fake news story about Paul Manafort, Wikileaks and Julian Assange aptly demonstrates this. The documentation of it is a bit lengthy but provides that it was a willful fake

On November 27 the Guardian prepared to publish a story which asserted that Paula Manafort, Trump’s former campaign manager, had met Julian Assange, the publisher of Wikileaks, in the Ecuadorian embassy in London on at least three occasions. Some two hours before the story went public it contacted Manafort and Assange’s lawyers to get their comments.

Assange’s Wikileaks responded through its public Twitter account which has 5.4 million followers. On of those followers is Katherine Viner:

It attached the email the Guardian’s Luke Harding had send. 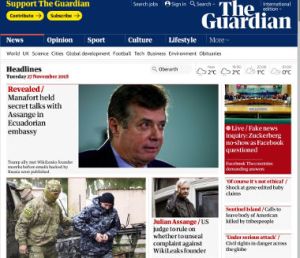 Donald Trump’s former campaign manager Paul Manafort held secret talks with Julian Assange inside the Ecuadorian embassy in London, and visited around the time he joined Trump’s campaign, the Guardian has been told.

Sources have said Manafort went to see Assange in 2013, 2015 and in spring 2016 – during the period when he was made a key figure in Trump’s push for the White House.

It is unclear why Manafort wanted to see Assange and what was discussed. But the last meeting is likely to come under scrutiny and could interest Robert Mueller, the special prosecutor who is investigating alleged collusion between the Trump campaign and Russia.

A well-placed source has told the Guardian that Manafort went to see Assange around March 2016. Months later WikiLeaks released a stash of Democratic emails stolen by Russian intelligence officers.

Manafort, 69, denies involvement in the hack and says the claim is “100% false”. His lawyers declined to answer the Guardian’s questions about the visits.

The piece did not include the public denial Wikileaks issued to its 5.4 million followers one and a half hour before it was published.

The new sensational claim was immediately picked up by prominent reportersand major main stream outlets. They distributed is as a factual account. It is likely that millions of people took note of its claim.

But several people who had followed the Russiagate fairytale and the Mueller investigation were immediately suspicious of the Guardian claim.

The story was weakly sourced and included some details that seemed unlikely to be true. Glenn Greenwald noted that the Ecuadorian embassy is under heavy CCTV surveillance. There are several guards, and visitors have to provide their identity to enter it. Every visit is logged. If Manafort had really visited Assange, it would have long been known:

In sum, the Guardian published a story today that it knew would explode into all sorts of viral benefits for the paper and its reporters even though there are gaping holes and highly sketchy aspects to the story.

Moreover, the main author of the story, Luke Harding, is known to be a notorious fraud, a russo-phobe intelligence asset with a personal grievance towards Assange and Wikileaks. A year ago an important Moon of Alabamapiece – From Snowden To Russia-gate – The CIA And The Media – mentioned Harding:

The people who promote the “Russian influence” nonsense are political operatives or hacks. Take for example Luke Harding of the Guardian who just published a book titled Collusion: Secret Meetings, Dirty Money, and How Russia Helped Donald Trump Win. He was taken apart in a Real Newsinterview (vid) about the book. The interviewer pointed out that there is absolutely no evidence in the book to support its claims. When asked for any proof for his assertion Harding defensively says that he is just “storytelling” – in other words: it is fiction. Harding earlier wrote a book about Edward Snowden which was a similar sham. Julian Assange called it “a hack job in the purest sense of the term”. Harding is also known as plagiarizer. When he worked in Moscow he copied stories and passages from the now defunctExile, run by Matt Taibbi and Mark Ames. The Guardian had to publish an apology.

The new Guardian story looked like another weak attempt to connect the alleged Russian malfeasance with Assange and the Wikileaks publishing of the DNC emails. Assange and other involved people deny that such a relation existed. There is no public evidence that support such claims.

At 16:05 utc the Guardian silently edited the story.

Caveats (here in italic and underlined) were added to the headline and within several paragraphs. No editorial note was attached to inform the readers of the changes:

…
It is unclear why Manafort would have wanted to see Assange and what was discussed. But the last apparent meeting is likely to come under scrutiny and could interest Robert Mueller, the special prosecutor who is investigating alleged collusion between the Trump campaign and Russia.
…
Why Manafort might have sought out Assange in 2013 is unclear.
…
Manafort, 69, denies involvement in the hack and says the claim is “100% false”. His lawyers initially declined to answer the Guardian’s questions about the visits.

One paragraph was added to included Wikileaks’ denial:

In a series of tweets WikiLeaks said Assange and Manafort had not met. Assange described the story as a hoax.

At 16:30 utc, under fire from other media and journalists, the Guardian issued a statement:

This story relied on a number of sources. We put these allegations to both Paul Manafort and Julian Assange’s representatives prior to publication. Neither responded to deny the visits taking place. We have since updated the story to reflect their denials.

At 21:05 utc a third version was published which included Manafort’s denial.

Half an hour later Julian Assange instructed his lawyers to sue the Guardianfor libel. Wikileaks opened a fund to support the lawsuit.

A day after the Guardian smear piece the Washington Times reported that Manafort’s passports, entered into evidence by the Mueller prosecution, show that he did not visit London in any of the years the Guardian claimed he was there to visit Assange.

The story was completely false and the Guardian knew it was. It disregarded and left out the denials the subjects of the story had issued before it was published.

The Guardian has become a main outlet for British government disinformation operations aimed at defaming Russia. It smeared Assange and Snowden as Russian collaborators. It uncritically peddled the Russiagate story and the nonsensical Skripal claims which are both obviously concocted by British intelligence services. That seems to have become its main purpose.

As Disobediant Media notes (emphasis in the original):

While most readers with functional critical thinking capacity may readily dismiss the Guardian’s smear on its face, the fact that the Guardian published this piece, and that Luke Harding is still operating with even the tiniest modicum of respect as a journalist despite his history of deceit, tells us something bone-chilling about journalism.

It is no accident that Luke Harding is still employed: in fact, it is because of Harding’s consistent loyalty to establishment, specifically the UK intelligence apparatus, over the truth that determines his “success” amongst legacy press outlets. Harding is not a defacement or a departure from the norm, but the personification of it.

The truth is that the Guardian has not erred in this latest story attacking Assange, or in its much longer-running campaign to vilify him. With this story, it has done what it regularly does when supposedly vital western foreign policy interests are at stake – it simply regurgitates an elite-serving, western narrative.

Its job is to shore up a consensus on the left for attacks on leading threats to the existing, neoliberal order: …

The Guardian did not make a mistake in vilifying Assange without a shred of evidence. It did what it is designed to do.

We have previously shown that the Guardian even uses fascist propaganda tropes to smear the Russian people. It is openly publishing Goebbels’ cartoons and rhetoric against Europes biggest state. There is no longer any line that it does not dare to cross. Unfortunately other ‘western’ media are not much better.

Within hours of being published the Guardian piece was debunked as fake news. That did not hinder other outlets to add to its smear. Politico allowed “a former CIA officer,” writing under a pen name, to suggest – without any evidence – that the Guardian has been duped – not by its MI5/6 and Ecuadorian spy sources, but by Russian disinformation:

Rather than being the bombshell smoking gun that directly connects the Trump campaign to WikiLeaks, perhaps the report is something else entirely: a disinformation campaign. Is it possible someone planted this story as a means to discredit the journalists?
…
Harding is likely a major target for anyone wrapped up in Russia’s intelligence operation against the West’s democratic institutions.
…
If this latest story about Manafort and Assange is false—that is, if, for example, the sources lied to Harding and Collyns (or if the sources themselves were lied to and thus thought they were being truthful in their statements to the journalists), or if the Ecuadorian intelligence document is a fake, the most logical explanation is that it is an attempt to make Harding look bad.

The is zero evidence in the Politico screed that supports its suggestions and claims. It is fake news about a fake news story. It also included the false claim that Glenn Greenwald worked with Wikileaks on the Snowden papers. That claim was later removed.

We have seen a similar pattern in the Skripal affair. When ‘western’ intelligence get caught in spreading disinformation, they accuse Russia of being the source of the fake.

Unfortunately no western main stream media can any longer be trusted to publish the truth. The Guardian is only one of many which peddle smears and disinformation about the ‘enemies’ of the ruling ‘western interests’. It is on all of us to debunk them and to educate the public about their scheme.