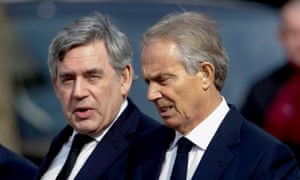 In this dismal and depressing autobiography, he attempts to portray himself as a progressive opponent of neoliberalism and tries to relieve himself of culpability in New Labour disasters, such as the invasion of Iraq in 2003. Time and again, Brown portrays himself as a man of high moral and political principle: “If the choice is between doing what is popular and what is right, I will do what is right”.

However, it won’t wash, and the mask slips at many points. In this short review, I’ll look at just one example that illustrates the sheer hollowness and implausibility of Brown’s attempt to exonerate himself.

For most, the single gravest event in the New Labour governments of 1997-2010 was the invasion of Iraq in 2003. Under a pretext of a threat from weapons of mass destruction (WMDs) — including chemical and biological arms — Britain joined President George W Bush’s US-led invasion and occupation of Iraq, unleashing civil war, bloodshed, chaos and suffering on a massive scale — the effects of which are still being felt in the region to this day.

It was clear to even a casual observer over the course of 2002 and early 2003 that Bush and his administration of right-wing ideologues were hell bent on attacking Saddam Hussein’s Iraq on one pretext or another. When, in the face of unprecedented levels of worldwide public protest, the attack finally came on March 20, 2003, people were horrified but not surprised. In the vote in the British House of Commons that authorised involvement in the invasion, 121 Labour MPs voted against the government, 198 supported an amendment saying that the case for war had not yet been made, and cabinet ministers like Robin Cook resigned in protest.

In contrast, although Brown tries to downplay his role in the lead up to war, as Chancellor he authorised a number of huge payments to fund the military build up to the invasion: up to £150 million in September 2002, two payments of £150 and £500 million respectively in December 2002, and regular requests from Defence Secretary Geoff Hoon for “urgent operational requirements”. Before the invasion started in March 2003, Brown’s Treasury Department was already working with the US on a plan for a new currency for Iraq, even using the Bank of England’s contractors to print the banknotes.

On March 16, Brown appeared on David Frost’s Sunday TV program, urging France to support Britain and the US in joint action. (Remarkably, the British government’s strategy “was to focus on blaming France — that we should never have our decisions on national security dictated by them”).

Of the debate in the House of Commons on March 18 2003, Brown writes: “As I cast my vote [in favour of military action], I was confident that the information we had been given about Saddam’s weapons was accurate”.

Of course, it emerged subsequently that Iraq had no WMDs. What then of the “information” that had led Brown to confidently cast his vote in favour of war? Brown points the finger at the US: “If I am right that somewhere within the American system the truth about Iraq’s lack of weapons was known, then we were not just misinformed but misled on the critical issue of WMDs”. He mentions a report prepared for US Defence Secretary Donald Rumsfeld by the US Joint Chief of Staff’s director for intelligence in September 2002, outlining the sheer lack of evidence of Iraqi WMDs — but notes that this was not declassified until 2011.

In addition, Brown mentions a telephone call between Blair and Bush in December 2001 in which Blair “appeared to agree in principle to support the American-led intervention” — but says he didn’t know about this until after he had left office. He also mentions “important steps to war” taken in meetings between Blair and Bush at the latter’s ranch in Texas and at Blair’s Chequers residence in April 2002, as well as Blair’s “I will be with you, whatever” letter to the US President in July 2002 — but says he did not learn of any of this “until much later”.

There was also a memo — not unearthed until 2006 — revealing “an American plan ‘to fly U2 reconnaissance aircraft painted in UN colours over Iraq under fighter cover’ in the hope of provoking Iraqi forces into opening fire and thereby putting them in breach of the UN resolution”. The memo was written two months before the March 2003 invasion by David Manning, Blair’s chief foreign policy adviser.

Brown thus tries to excuse himself in virtue of having made a decision to support the war on the basis of information that he had no reason to doubt at the time and in virtue of lacking information that might have led him to suspect the integrity of the Bush-Blair case for the invasion. It’s hard to take this seriously as an excuse.

Worldwide, millions of ordinary people marched against the war, having come to the right conclusion: that Blair and Bush were leading the world up the garden path on a pre-ordained path to invasion. Even among the ranks of the normally supine Parliamentary Labour Party there were 121 MPs prepared to vote against the government.

And Brown himself reports that on February 14, 2003, UN inspector Hans Blix told the Security Council that his team had not found any WMDs and that shortly afterwards Dr Elbaradei of the International Atomic Energy Authority stated that they had found “no evidence of ongoing and prohibited nuclear or nuclear-related activities in Iraq”.

Throughout the book — whether on privatisation, “modernisation” of public services, university tuition fees, de-industrialisation and financialisation, Scottish independence, the British Labour Party or “enduring British values” — Brown’s efforts to portray himself as an opponent of neoliberalism are as unconvincing as his attempt to exonerate himself over Iraq.
He’s too clumsy not to reveal his true colours. Benjamin Netanyahu is “an old friend and colleague”. British business magnate and billionaire Alan Sugar is “brilliant and inspirational”. The Malvinas/Falklands conflict was a “triumph” worth celebrating. And in the closing pages he approvingly quotes not Thomas Paine or Mary Wollstonecraft, but Edmund Burke, the conservative critic of the French Revolution whose writings spurred Paine and Wollstonecraft to produce their greatest works in reply.
More than anything else, Brown’s dire attempt at self-justification simply illustrates La Rochefoucauld’s maxim that hypocrisy is the tribute vice pays to virtue.