Facebook has removed the page of yet another media outlet. This time, it’s not a far right fringe network like Infowars, but “Venezuela’s only independent, grassroots leftwing English media platform,” the outlet, Venezuela Analysis, noted on Twitter.

Publishers for the news outlet were informed by Facebook on Thursday that their page had been “unpublished” due to “recent activity” that “doesn’t follow the Facebook Pages Terms.” When a Facebook page is unpublished, it becomes no longer viewable to the public, only to the administrators. Venezuela Analysis will have the option to appeal the decision.

It isn’t clear what specific activity prompted the move.

The outlet called it a “naked attempt to block our grassroots coverage of the on-the-ground situation in Venezuela. Need more evidence that [Facebook] is arm of corporate [mainstream media] censoring alternative voices?”

The outlet also noted that its page was unpublished after it posted a “brilliant piece demolishing the [mainstream media’s] appalling coverage of the assassination attempt against [Venezuelan President Nicolas Maduro]” on Saturday.

The reader-funded news outlet is a rarity in the English-language media landscape because of its pro-Bolivarian stance, a stark contrast to the majority of coverage of Venezuela in the United States, which generally promotes Venezuelan opposition claims uncritically, giving often-violent opposition protests glowing coverage while excoriating the elected government.

Venezuela Analysis has received glowing endorsements from a host of political influencers. Filmmaker John Pilger wrote, “Never has a country, its people, its politics, its leader, its myths and truths been so misreported and lied about as Venezuela in the past decade. Not only has [Venezuela Analysis] done much to correct this with its scrupulous attention to facts, both obvious and concealed, it has opened up a unique space for genuine critique of one of the world’s most imaginative popular movements.”

Director Oliver Stone said, “Unlike most mainstream media reporting about governments in Latin America, Venezuela Analysis provides a sorely missed counterpoint — presenting a progressive perspective on the news from Venezuela that is in-depth and also takes the views of the country’s poor majority into account.”

Linguist and philosopher Noam Chomsky wrote that the outlet “has regularly provided very useful description, analysis and commentary on developments in Venezuela, rarely available in the US or the West generally, and valuable for a balanced understanding.” 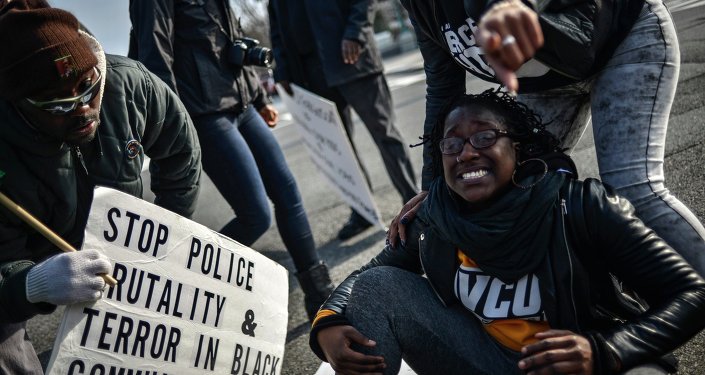 © REUTERS / James Lawler Duggan
Do I Know You? US Police Created Facebook Profiles to Spy on Black Activists

Not everybody is thrilled with the coverage, though. In a leaked WikiLeaks cable from the United States, the outlet is included on a list of websites allegedly used by the Venezuelan government to “liberally” use “cyberspace to spread its war on the oligarchy, neoliberalism, the United States government, and the proposed Free Trade Area of the Americas.”

The removal of Venezuela Analysis’ page from the public’s eye comes after a coordinated ban from YouTube, Facebook and Apple against Infowars, a far right fringe media outlet, sparking fear that tech companies’ unilateral arbitration of acceptable speech could form a slippery slope.

It also follows the removal of some 32 pages by Facebook, including an event sponsored by left wing Washington, DC, activists against a planned far-right rally commemorating the deadly Unite the Right rally in Charlottesville, Virginia in 2017 that was rife with neo-Nazi slogans and symbols. One of the six administrators of the DC event was accused of displaying activity consistent with alleged Kremlin trolls.

Facebook has increased its scrutiny of alternative views since the January 2017 Director of National Intelligence report on “Russian Activities and Intentions in Recent US Elections” spent half of its pages detailing dubious allegations against RT and Sputnik, including that the outlets seek to foment “radical discontent” on behalf of the Kremlin.

Since then, Twitter banned RT and Sputnik from advertising on its platform, and Google “de-listed” both from its Google News search page, while Facebook was “already a good American,” tweeted then-Social Media Director at RT Ivor Crotty in a jibe about Facebook’s unfavorable algorithmic treatment towards the outlet.

Facebook has been partnering with the Atlantic Council — funded by NATO, Gulf States and defense contractors — on filtering out so-called fake news from its platform. Venezuela’s regional rival Colombia, which the government blamed in part for the recent assassination attempt against Maduro, became Latin America’s first “Global Partner” with NATO in June.

It goes without saying that the think tank’s views on Russia are deeply hawkish, but its positions on the successor to Hugo Chavez are equally in lock-step with the US State Department. The Atlantic Council simultaneously claims that the democratically elected Bolivarian leader Maduro drove Venezuela “to the worst economic and humanitarian crisis in [its] history,” while also calling on the US to “ramp up economic sanctions on Venezuela as part of a strategy to change [Maduro’s] authoritarian behavior.”