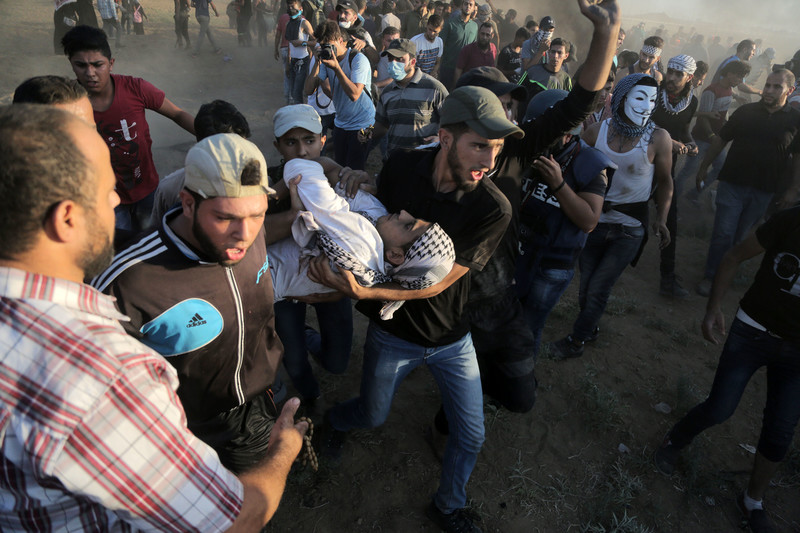 Palestinians evacuate Karim Kullab after he was shot by Israeli snipers during Great March of Return protests on 21 September 2018. Kullab, 25, died of his injuries later that day. Mohammed Zaanoun ActiveStills

Israeli forces may have committed war crimes and crimes against humanity by using lethal military force against unarmed protesters in Gaza, a United Nations independent commission of inquiry has found.

“These violations clearly warrant criminal investigation and prosecution,” he added.

.@UN Commission of Inquiry on the 2018 protests in #Palestine finds that “Israeli snipers shot at journalists, health workers, children and persons with disabilities, knowing they were clearly recognizable as such.”
Full report: https://t.co/gYsjvByrsJ pic.twitter.com/Gq9SKNI7Qh

The commission, formed after more than 60 people were killed in a single day of protests last May, was tasked with identifying those responsible for rights violations in relation to the Great March of Return demonstrations along Gaza’s eastern boundary.

Israel has refused to cooperate with the UN investigators and denied them entry to the country. The investigators were prevented by Egypt from accessing Gaza through its territory due to security concerns, but has otherwise cooperated, according to the commission report.

The US, which was one of only two countries who voted against the commission’s formation, withdrew from the UN body in protest.

The commission’s report calls on Israel to immediately lift its blockade on Gaza – one of the key demands of the Great March of Return – and to investigate “every protest-related killing and injury, promptly, impartially and independently.”

A confidential file containing dossiers of alleged perpetrators of international crimes related to the Great March of Return will be handed over to the High Commissioner for Human Rights so that it can be transferred to the International Criminal Court.

The situation in the occupied West Bank and Gaza Strip has been under preliminary examination by the International Criminal Court since 2015. Its chief prosecutor issued an unprecedented warning to Israeli leaders last year that they may face trial for the killings of unarmed protesters in Gaza.

Recognizing that Palestinians in Gaza are barred from seeking remedy in Israeli courts, the inquiry report recommends that UN member states “consider imposing individual sanctions, such as a travel ban or an assets freeze, on those identified as responsible by the commission.”

While Israeli leaders lashed out against the commission’s report, the UN investigators’ calls for accountability were welcomed by human rights and campaigning groups:

We welcome today’s recommendation by the @UN_HRC Commission investigating Gaza’s Great March of Return for sanctions against Israeli officials.

We reiterate the call for States to implement a military embargo of Israel, and for intensified grassroots #BDS campaigns. pic.twitter.com/bDqM5bLwVK

In Almost All Cases @UN Commission of Inquiry Finds the Use of Live Ammunition by Israeli Forces Against Demonstrators Unlawful and Recommends Accountability Measures; @AlMezanCenter Welcomes the Critical Reporthttps://t.co/OzVSbLahOI pic.twitter.com/m1McpU0yh6

Gisha calls on Israel to adopt the recommendations of the UN Commission of Inquiry: The closure and the unlawful and excessive use of force against demonstrators must end https://t.co/6eihEm5Ufo

We welcome the report issued today by the #UN Commission of Inquiry on #Gaza, #GreatReturnMarch. We have repeatedly highlighted that many cases appeared to amount to willful killings constituting war crimes. https://t.co/3fieepfTiD

.@AdalahEnglish finds the report “a scathing indictment of the Israeli government”, “welcomes the COI’s … rejection of the Israeli Supreme Court’s decision which allowed the continued use of lethal force against Palestinian civilian protesters in #Gaza” https://t.co/suRMIdGbcv pic.twitter.com/pUNFrlty2X

Nearly 200 unarmed demonstrators were killed, and 6,100 more injured, by military snipers, between the launch of the Great March of Return protests on 30 March and 31 December 2018, the period under review by the UN investigators.

“Another 3,098 Palestinians were injured by bullet fragmentation, rubber-coated metal bullets or by hits from tear gas canisters,” according to the commission report.

Four Israeli soldiers have been injured during the protests.

No Israeli civilians have been killed or injured due to the protests, though incendiary balloons and kites launched from Gaza have “caused significant property damage” in southern Israel, with the UN experts faulting the Hamas authorities in Gaza for not stopping “the use of these indiscriminate devices.”

The commission investigated all protest fatalities, and vetted the circumstances of 300 injuries by live ammunition.

The investigators noted only one incident on 14 May “that may have amounted to ‘direct participation in hostilities’ ” and another incident on 12 October “that may have constituted an ‘imminent threat to life or serious injury’ to Israeli security forces.”

Unlawful use of force

Israeli forces “killed and injured civilians who were neither directly participating in hostilities, nor posing an imminent threat. These serious human rights and humanitarian law violations may constitute war crimes or crimes against humanity.”

Copious amounts of audio and video footage of the protests were reviewed by the commission. Documentation of unarmed protesters, including children, being shot and killed or permanently injured are compiled in this short video published by the UN Human Rights Council:

The 22-page report released by the commission of inquiry on Thursday – a longer version will be made available next month – describes protesters being picked off by snipers while standing and holding Palestinian flags, paramedics being targeted while coming to the aid of the wounded, and children being killed while sitting, dancing or standing in a crowd.

Thirty-five children were killed during Great March of Return protests in 2018 (five more have been slain this year). Children were killed while posing “no imminent threat of death or serious injury to soldiers,” and four were shot dead “as they walked or ran away from the fence,” according to the commission of inquiry report.

“Israeli forces caused permanent disabilities to many of the 940 children shot during the demonstrations,” the report states.

Schoolboy Ahmad Ghanem, 15, was in a coma for a week after being shot during one of the protests. He and his father describe their ordeal in this video produced by the UN Human Rights Council:

Like Israeli snipers targeted children, knowing that they were children, paramedics and journalists marked as such were intentionally shot and killed, the commission of inquiry found.

Their report states that the occupied Palestinian territory, comprising Gaza and the West Bank, “is one of the most dangerous places in the world to be a health worker.”

Three paramedics have been killed while on duty during the Great March of Return protests.

Soldiers have shot four journalists in the abdomen, “just under their vests marked ‘Press,’” killing two of them.

Persons with visible disabilities have also been intentionally targeted, including Fadi Abu Salmi, whose legs were amputated following an Israeli airstrike the previous decade. Two deaf protesters were also shot in the head and killed.

Both men and women have been shot in the lower abdomen and groin, with victims telling the commission “that they were now unlikely to be able to have children.”

Protesters have incurred horrific injuries, with an international doctor describing to the UN investigators “massive open wounds in the legs, with skin and muscles ‘blown out,’ bones smashed to pieces, and damage to blood vessels leading to vascular injury, putting the entire limb at risk.”

The staggering number of casualties has put family breadwinners out of work and the burden of care on women, adding pressure on Palestinians in Gaza, where unemployment is the highest in the world.

The thousands of injuries have also “affected health care for all Gazans,” according to the report, with hospitals having to divert resources away from ordinary medical care.

“Approximately 8,000 elective surgeries were canceled or postponed, resulting in a backlog that will take years to address,” the report states.

COGAT, the bureaucratic arm of Israel’s military occupation, denied a travel permit request from the family of Zakaria Bishbish, 14, shot in the back during protests on 30 May, giving no reason. The boy died from his injuries on 18 June.

In the video below, Khalil al-Faki, 19, describes the great efforts he had to make to receive necessary medical care – he was forced to travel alone internationally with a severe injury – and how he will have to wear a medical device on his leg for the rest of his life after being shot by an Israeli sniper:

The commission of inquiry refutes Israel’s attempts to justify its use of lethal force against protesters.

Israel continues to argue that the Gaza protests and its crackdown on them are “part of the armed conflict between the Hamas terrorist organization and Israel.”

But the UN investigators echo what Palestinian human rights groups have previously stated: that the demonstrations along Gaza’s boundary with Israel are a civilian matter of law enforcement governed by the framework of international human rights law.

The commission of inquiry affirms the civilian nature of the protest and their “clearly stated political aims.”

The Great March of Return sprang from poet and journalist Ahmed Abu Artema’s January 2018 call for a nonviolent march to the Gaza-Israel boundary to bring international attention to Palestinian refugees’ right to return to the lands from which their families were expelled in 1948.

Three-quarters of Gaza’s population of two million are registered refugees.

UN General Assembly resolutions 194 and 3236 affirm Palestinian refugees’ right to return but Israel has prevented them from doing so as it “would threaten the existence of Israel as a Jewish state.”

Abu Artema has said that his call for a mass mobilization in besieged and impoverished Gaza “was like planting a seed in fertile soil ready for growth.”

Under military occupation since 1967 and air, land and sea blockade since 2007, young people in Gaza “have no hope for their future,” according Abu Artema. “Something had to be done, we couldn’t wait anymore.”

He describes 14 May as a “bloody day” – during which dozens of protesters were killed, prompting calls for a UN inquiry – in this video interview:

An international journalist who covered the protests that day described to UN investigators “the slow, methodical shooting. Every few minutes, you would hear a shot ring out and you would see someone fall. And then another shot and another person fell. It went on for hours.”

The journalist added: “I couldn’t say how many people I saw who were shot because it was so high. I have covered wars in Syria, Yemen, Libya. I have never seen anything like this. The slow methodical shooting. It was just shocking.”