There is one outstanding statistical feature of 21st century capitalism.  Capitalism is increasingly failing to develop what Marx called the “productive forces” (namely the technology and labour necessary to expand the output of things and services that human society needs or wants).  As measured by gross national product in all the economies of the world (or per person), world capitalism is finding it more and more difficult to expand.

When Marx and Engels wrote the Communist Manifesto 170 years ago, they proclaimed the productive power unleashed by the capitalist exploitation of labour power, based on using more and more means of production (machines, technology etc) to replace human labour, while extending its tentacles to all parts of the globe.  Indeed, the rapacious drive for profit has led to an uncontrolled destruction of nature and of the earth’s resources that has polluted the planet.  And now, fossil fuel production has caused an increasingly irreversible global warming that is changing the earth’s climate, bringing with it extreme weather and disasters.

Last year global GDP among the world’s 195 nations hit a record $85trn.  Remarkably, three-quarters of this was accounted for by just 14 economies – the lucky few with an individual GDP in excess of $1trn. 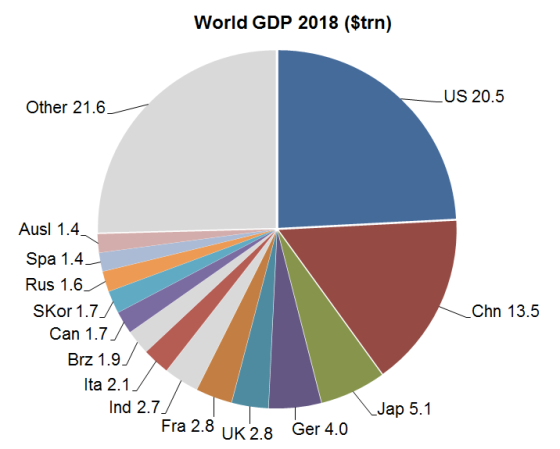 The global population also hit a record last year of 7.6bn.  That’s a doubling in less than half a century.  The working age population (WAP) has reached 5bn, but this is mainly outside the top 12 economies (ie G14 minus India and Brazil). 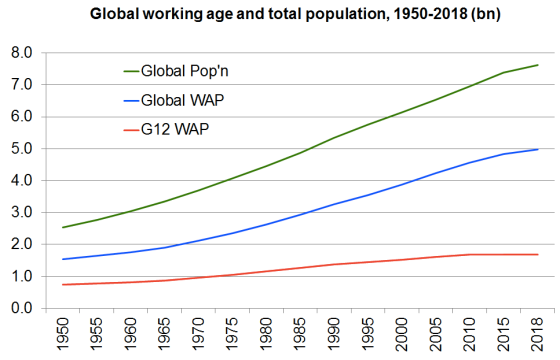 In the major capitalist economies, output is now expanding much more slowly than ever before.  As Alan Freeman has shown in a recent paper, “economic growth of the industrialised North has fallen continuously, with only brief and limited interruptions, since at least the early 1960s. The trend is extremely strong and includes all major Northern economies without exception.” The_sixty-year_downward_trend_of_economi (1) 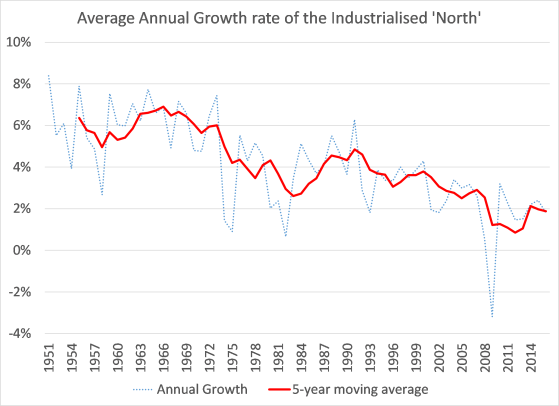 As Freeman concludes, “we face, not merely a decline in the GDP growth rate of one country (for example, the United States, whose decline has been studied more exhaustively) but of an entire group – the advanced or industrialised countries – whose growth rates follow  the same trend and indeed, have converged. The trend observed is thus highly likely to be systemic – accounted for by the structure of the world economy as a whole – than being a result of the problems or vagaries of one particular country.” 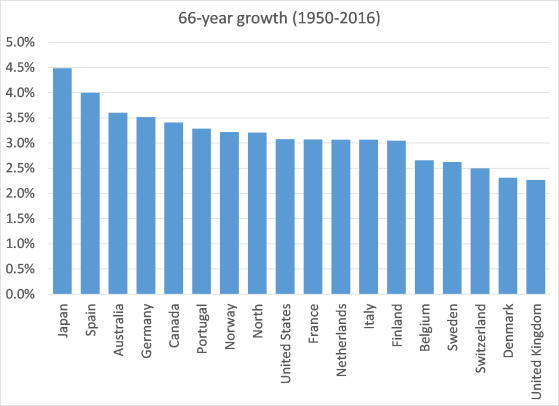 Capitalism is not fulfilling its only claim to fame –expanding the productive forces.  It is exhausted.  Alongside that, inequality of wealth and income in the major economies is widening, poverty levels and the gap between rich and poor countries and people is widening.  And nature and the climate are severely damaged. 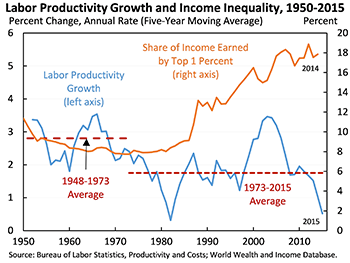 For the first time since the emergence of capitalism as the dominant mode of production globally, the largest economies – the G12 — saw their collective working age populations (WAP) decline. And this decline will accelerate, according UN Population Division forecasts. 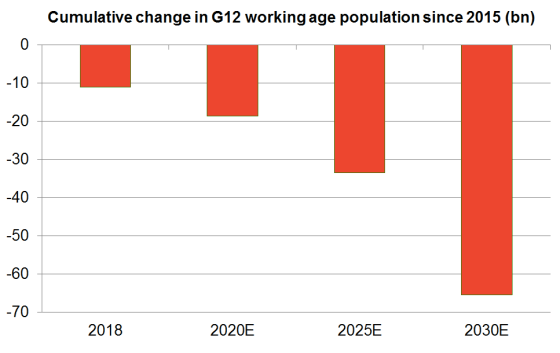 Of the 14 economies with $1trn or more GDP, there are only two – India and Brazil – where the working age population will grow over the next generation.  The other 12 will experience a decline in their workforce.  It’s possible that increased immigration from more populous regions could enable the US, the UK, Canada and Australia to expand their workforce for a while – although the governments in all these countries want to cut back immigration.  In Japan, Germany and Italy even immigration will not stop the fall.  In South Korea, Germany and Italy, excluding immigration, the workforce will fall by 1% a year over the next ten years.  So, other things being equal, that is 1% a year of potential GDP growth. 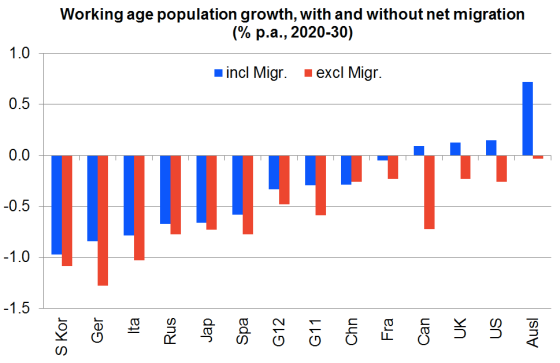 As a result, these leading capitalist economies will have ageing workforces and an increasingly dependent non-working population.  Currently, among the biggest economies, people of working age (15-64 year olds) typically account for 65% of the total population. 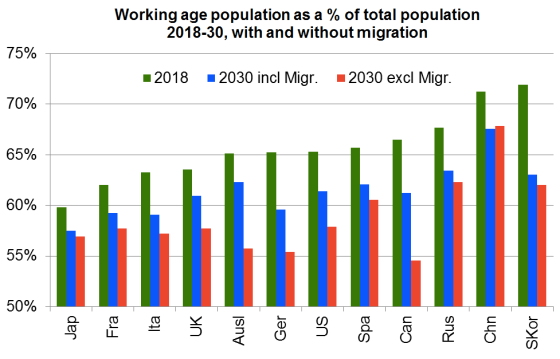 Japan’s rapidly ageing population, however, shows the way forward.  By 2030, the ratio of WAP/total population will decline everywhere.  For those countries unable to “import” skilled working-age people, it will decline precipitously. 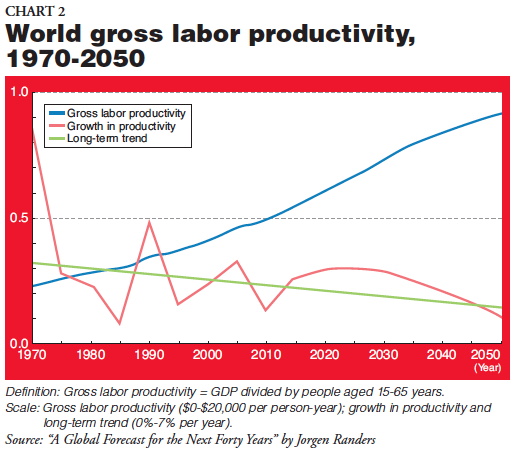 Over the last 40 years and especially in the last 15, there’s been a broad-based slowdown in output per hour worked across the major economies.  For the G11 (excludes China), it’s currently running at a trend rate of just 0.7% p.a. 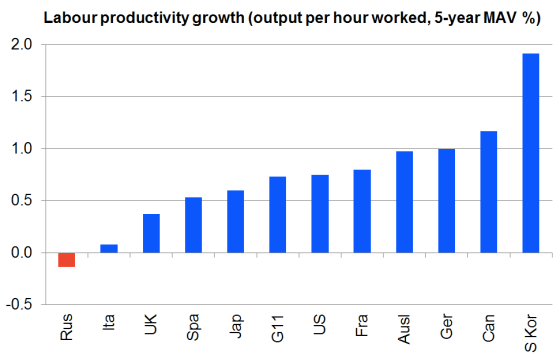 Russia’s productivity level is falling, while that of Italy and the UK is hardly moving.

If we add together the potential growth in the workforce and the growth in productivity of that workforce, we can get a forecast of potential real GDP growth over the next ten years.  And remember, this assumes no new slumps in investment, employment and production from a crisis in capitalist production.

Without net immigration, real GDP across the G11 bloc will expand by less than 1% a year, with Australia doing best at 0.9% a year, while Russia and Italy could suffer an annual shrinkage of a similar proportion.  With immigration, Australia’s potential annual growth could reach the heady heights of 1.7% a year, but everybody else would have a sub-1% growth rate. Even allowing for some skilled immigration from outside, it’s unlikely that real GDP growth for the G11 bloc as a whole would exceed 0.5% p.a! 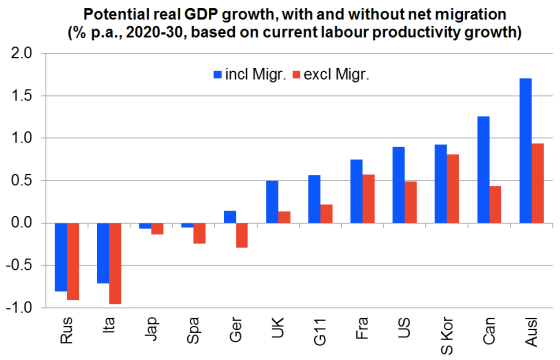 But why is productivity growth in the major economies falling?  The productivity puzzle has been debated by mainstream economists for some time now.  The ‘demand pull’ Keynesian explanation that capitalism is in secular stagnation due to a lack of effective demand to encourage capitalists to invest in productivity enhancing technology.  Then there is the supply-side argument from others that there are not enough effective productivity-enhancing technologies to invest in – the day of the computer, the internet etc, is over and there is nothing new that will have the same impact.

But there is also another very simple explanation.  Evidence shows that productivity growth is mainly driven by capital investment, which replaces labour with machines – the machines boost the output of each worker using the technology and also reduce the number of workers needed.  There are three factors behind productivity growth, the amount of labour employed, the amount invested in machinery and technology and the X-factor of the quality and innovatory skill of the workforce.  Mainstream growth accounting calls this last factor, total factor productivity (TFP), measured as the unaccounted for contribution to productivity growth after capital invested and labour employed.

In the case of the US, all three factors were at their strongest in the ‘hi-tech’ decade of the 1990s, but in the 2000s, the contribution of capital investment and labour employed dropped and since the Great Recession and in the subsequent Long Depression, all three factors have declined. 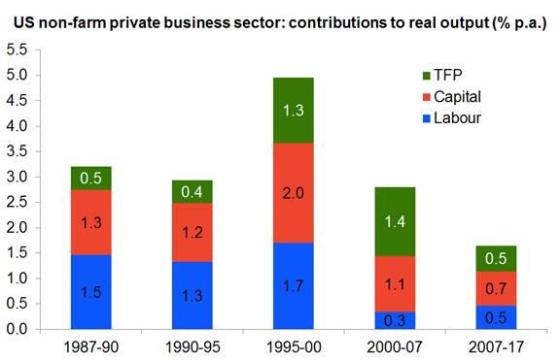 Part of the decline in US capital and labour investment can be laid at the door of increased globalisation as American companies went overseas for their factories and activities.  But investment to GDP has declined in all the major economies and since 2007 (with the exception of China). 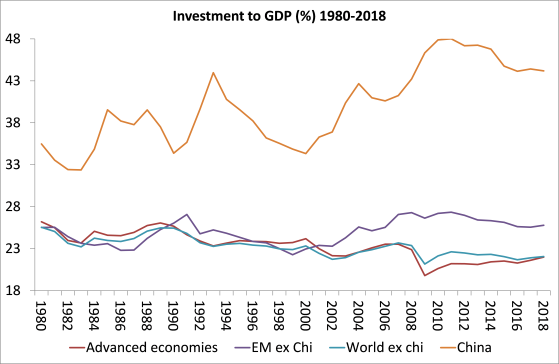 In 1980, both advanced capitalist economies and ‘emerging’capitalist ones (ex-China) had investment rates around 25% of GDP.  Now the rate averages around 22%, or a more than 10% decline.  The rate fell below 20% for advanced economies during the Great Recession.

Indeed, productivity growth is also slowing in the so-called emerging economies like China, Brazil and India. 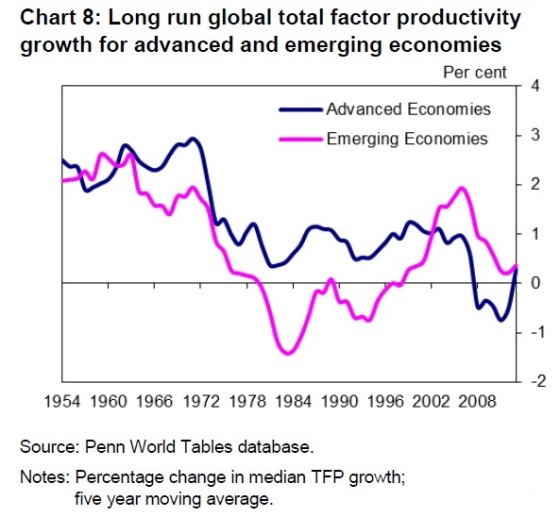 Why is investment in new technology so sluggish and thus failing to restore productivity growth?  The main reason for low investment in capitalist economies is that capitalists do not think it is profitable to invest in new technology to replace labour. Indeed, in the post Great Recession period, in many major economies like the US, the UK, Japan and in Europe, companies have preferred to keep their labour force and employ new workers on more ‘precarious’ contracts with fewer non-wage benefits and part-term or temporary contracts.  That is revealed in very low official unemployment rates alongside low investment rates.  Thus productivity growth is poor and overall real GDP growth is below-par.

The way to restore productivity growth and so get economies growing at a rate that can meet the demands of people for decent homes, education, health, and renewable energy is boost investment in new technology and the labour skills to go with it and distribute the gains to all.  But here lies the contradiction in capitalist production.  Production for profit not need.  And increased investment in technology that replaces value-creating labour leads to a tendency for profitability to fall.  So the need to expand and develop the productive forces comes into conflict capitalist accumulation.  And resolving that contradiction through slumps that raise profitability or by increased exploitation of the global workforce is getting much more difficult. The global workforce available to exploit is not growing so fast and while there are still reserves of labour in Africa (eg Nigeria etc) and Asia, in the developed capitalist economies, the workforces are set to shrink; while productivity growth through more investment in technology cannot compensate if profitability continues to press downwards over time.