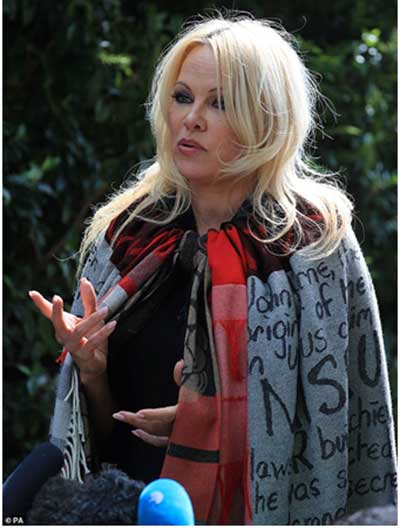 Pamela Anderson has revealed she fears Julian Assange will be assassinated if he is extradited to the US, hours after visiting him in Belmarsh high-security jail.

The former Baywatch star said she was “deeply concerned about his well being” and does not think the Wikileaks founder will “survive it”.

Asked if she was worried someone might try to take the imprisoned 47-year-old’s life if he’s taken to the United States, the actress replied: “or even where he is”.

Ms Anderson visited Assange at the imposing jail in Woolwich, southeast London, May 7, 2019 after he was jailed last month for breaching bail conditions.

After their first meeting in over a year, Ms Anderson said: Just seeing him today for the first time, I just know it’s very urgent.

She said: “It’s really important that people really know who he is and that we don’t allow him to be extradited because I don’t believe he’ll be saved in America’s hands.”

Ms Anderson added: “We’re talking about saving somebody’s life. We need to get as much support as we can for this person who is just trying to tell us the truth.”

Wearing a shawl – with a politically worded pattern – draped over her, Ms Anderson met Assange with WikiLeaks editor Kristinn Hrafnsson.

Following her visit, she said: “He does not deserve to be in a supermax prison. He has never committed a violent act. He is an innocent person.”

She revealed that he has no access to information, is “really cut off from everybody” and has not been able to speak to his children.

“He is a good man, he is an incredible person. I love him, I can’t imagine what he has been going through,” Ms Anderson added.

“It is going to be a long fight and he deserves our support. He needs our support, so whatever anyone can do – maybe write to him, encourage him,” Ms Anderson added.

She added, “We just have to keep fighting, because it is unfair. He has sacrificed so much to bring the truth out and we deserve the truth.”

Asked about the lengthy prison sentence Assange could face if he is extradited to the US, Ms Anderson said: “We need to save his life. That’s how serious it is.”

Standing by her side, WikiLeaks editor Kristinn Hrafnsson added: “It is a question of life and death – that’s how serious it is.”

Hrafnsson said it was shocking to see his friend, a journalist and an intellectual, “sitting in a high-security prison”.

“This is not justice. This is an abomination. Someone said that you could judge the civilization of a society by visiting its prisons,” he added.

He said: “Frankly, I have to say from my heart that this visit did not reflect well on the society here. This must end, this will be a fight.”

Hrafnsson said Assange is in “general” solitary confinement because he mostly spends 23 hours a day in his cell, adding that the situation was “unacceptable”.

Speaking after a court hearing last week, he said: “We are worried about Julian Assange. We are hearing that the situation in Belmarsh Prison is appalling because of austerity and cutbacks. For the last weeks since he was arrested, he has spent 23 out of 24 hours a day in his cell most of the time. That is what we call in general terms solitary confinement. That’s unacceptable. That applies to most of the prisoners in that appalling facility. It is unacceptable that a publisher is spending time in that prison.”

Assange was sentenced to 50 weeks’ jail for breaching bail when he failed to surrender to police in 2012.

Ms Anderson has previously spoken out in support of Assange and met him on several occasions when he lived at the Ecuadorean embassy in London.

Assange is also fighting extradition to the United States where he is wanted for questioning over the activities of WikiLeaks.

UN rights experts have voiced concern about the “disproportionate” sentence given to the WikiLeaks founder as well as his detention in a high-security prison.

The UN Working Group on Arbitrary Detention said in a statement on Friday it was “deeply concerned” about the “disproportionate” sentence imposed on Assange.

“The Working Group is of the view that violating bail is a minor violation that, in the United Kingdom, carries a maximum sentence of 12 months in prison.

“It is worth recalling that the detention and the subsequent bail of Mr Assange in the UK were connected to preliminary investigations initiated in 2010 by a prosecutor in Sweden.

“It is equally worth noting that that prosecutor did not press any charges against Mr Assange and that in 2017, after interviewing him in the Ecuadorian embassy in London, she discontinued investigations and brought an end to the case.

“The Working Group is further concerned that Mr Assange has been detained since 11 April 2019 in Belmarsh prison, a high-security prison, as if he were convicted for a serious criminal offence.

“This treatment appears to contravene the principles of necessity and proportionality envisaged by the human rights standards.”

The Working Group has previously stated that Assange was arbitrarily detained in the Ecuadorean embassy and should have had his liberty restored.

The severity of the punishment for a minor offence underlines that the British authorities may be preparing to deliver Assange to the United States. He could face years in jail if sent there.

Wikileaks helped to expose Western war crimes in Afghanistan and Iraq, and revealed some of the lies that George Bush and Tony Blair used to justify mass murder.

A supporter of Julian Assange is camping in front of HMP Belmarsh prison, where the jailed founder of Wikileaks is being held.

What the world’s journalists think of Julian Assange?

Ahead of World Press Freedom Day, May 3, 2019, Berlin-based PR company Sweet Spot PR conducted a poll on journalists’ feelings on WikiLeaks founder Julian Assange. At least 70% of the participating journalists believe that Assange should not be punished for leaking government data.

The PR company received responses from 22 nations on five continents, with 31% of journalists coming from the United States, Sweden, and the United Kingdom. Participants were allowed to remain anonymous.