Joint statement by civil society representatives on the first political steps of the President of Ukraine Volodymyr Zelensky.

It’s not too often we get a behind-the-scenes look at “diplomacy” in all its ugliest of forms. Given the mess Ukraine is in – as witnessed by the election of a completely nonsensical presidential candidate – it may come as no surprise such a veil-uncovering look originated there.

The new president has now taken office. Volodymyr Zelensky, of former comedy TV fame, was chosen by a large majority of Ukrainians above the “experienced” Poroshenko who left the country economically in ruins, was unable to halt widespread corruption, has been engaged in a brutal war against his own citizens in the East and has failed to re-unite Crimea with Ukraine. Quite how he was going to win over the hearts of the latter peninsula’s citizens by destroying the electricity grid as well as threatening to shut down its water supply is a mystery to me, but maybe I am not that “experienced” as he was.

Anyway. The article is not about Crimea, it’s not about Donetsk, not about Poroshenko, even not too much about Zelensky per se. It’s about “diplomacy” – a word I’ll write between parentheses consequently as it can be looked at as a pure and gruesome joke.

Last week Thursday an amalgam of dubiously sounding NGOs; relatively obscure individuals; Ukrainian, European and American “think-tanks” as well as some decidedly pro-Western media organizations released a publicly available document named: Joint statement by civil society representatives on the first political steps of the President of Ukraine Volodymyr Zelensky. Reading through it is drowsing yourself in an uncanny alternative universe where democratic values mean nothing. With it Zelensky is being wing-clipped on all fronts he promised change in from the get go. And we wonder: isn’t that the exact reason he made it to the top spot in the first place? Isn’t that exactly what a significantly large part of Ukraine’s population chose him for above Poroshenko? After all Zelensky got an astounding 77.2% of votes. We are talking Putin-size-figures here – see the irony? 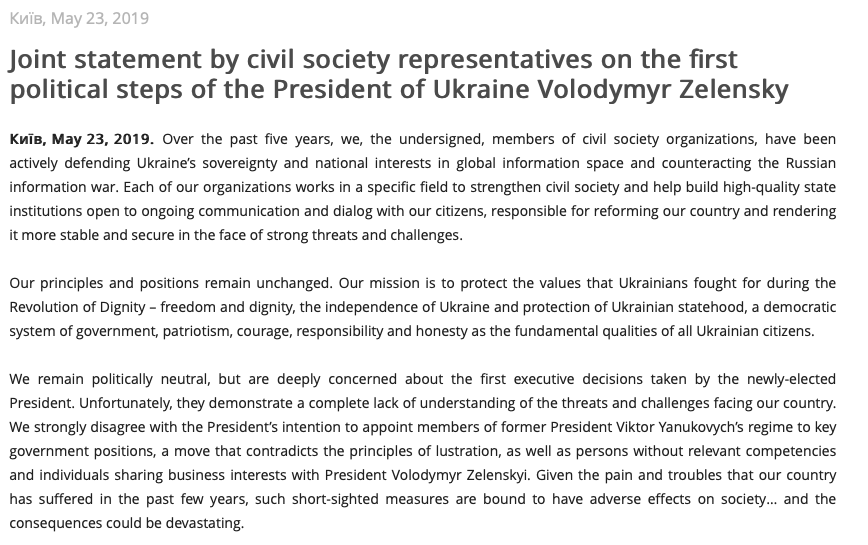 While I wanted to go into the details of the document linked above, picking it apart point by point, I am not going to as the excellent Irish journalist Danielle Ryan already did so in a highly-recommended piece. There’s other reflections to be made though…

The implications of this foul and dirty document to the public-at-large should be clear: elections mean nothing when powerful EU, US and UK backed groups undermine the potential for change right from the start. It’s immensely significant as it shows how “diplomacy” really works and its implications are dire…

If this is the kind of warning – broadcast publicly – one can only wonder what goes on behind closed doors. Warning huh? I could as well have written “threat”. The document is quite specific what will happen if Zelensky breaks one or more of the “red lines not to be crossed“. It says “… such actions will inevitably lead to political instability in our country“. This seems to be quite a clear reference to public revolt much like what happened during Maidan in 2013 and 2014 which cost the lives of over a hundred Ukrainians; itself a coup initiated by Western forces as I defended before.

It’s entirely disconcerting to notice how non-Ukrainian or foreign-funded Western entities sign a document which mentions “our country” no less than four times in its opening paragraphs. One can’t help but wonder why they were all up in arms because of alleged [but as of yet unproven] “Russian meddling” when they do so themselves in another Western “democracy” this blatantly.

But there’s more to think about. If a smallish, albeit “strategic” country like Ukraine gets served a beguiling and threatening document like this one out in the open, then what about the US? How would the powers-that-be react when – merely thinking out loud here – a US president would proclaim goals non-beneficial to the status-quo they have previously engineered?

Taking a Step Back

Some might be bewildered this topic now bridges into the orange baboon-in-chief but there we go… Could we expect a similar, yet insofar undisclosed, “document” addressed towards a president who promised “questioning NATO“, to “stop racing to topple foreign regimes” and more interestingly that “Russia and the United States should be able to work well with each other“? The latter catches the eye doesn’t it? The Ukrainian document clearly states as one of the many red lines: “fulfilling the requirements demanded by the aggressor state or achieving compromise with the Kremlin at the cost of making concessions to the detriment of national interests“. I wonder: if the president of the relative worldwide speck named “Ukraine” already is given that border-beyond-which-all-hell-breaks-loose, then what about a president of an infinitely more powerful country?

Could it be the US president was wing-clipped in similar fashion? One could think so given his track record of implementing some of his election agenda with a lower “global footprint” while failing to achieve the same result in the major ones linked above. Could it be he was not allowed to pursue avenues towards global stabilization because he “demonstrate[s] a complete lack of understanding of the threats and challenges facing our country [or world]“.

If the president of the relative worldwide speck named “Ukraine” already is given that border-beyond-which-all-hell-breaks-loose, then what about a president of an infinitely more powerful country?

Make no mistake. The document was published on the site of the Ukraine Crisis Media Center or UCMC. The list of supra-national entities, of non-governmental organizations as well as the multitude of foreign governments supporting the UCMC form an imposing foe. As visible in the center’s annual reports linked on the about page, some of the powers deciding on what Zelensky can not do are entirely foreign: the US Embassy is there, USAID, NATO, the Kingdom of the Netherlands, the German Embassy, the Spirit of America, the UNHCR and the British Institute of Statecraft most renown for the equally distressing “Integrity Initiative“.

With friends like these, who wants to be the enemy I wonder.

Zelensky certainly not as a former TV comedian who’s married with two children.

Trump on the other hand? Quite a powerful businessman who always has been friends to the political high-society? He might still engage.

The original source of this article is Global Research