Over the past 24 hours, the Australian Federal Police (AFP) have carried out two raids targeting separate media organisations, for their publication of articles exposing government spying plans and war crimes committed by Australian troops in Afghanistan. 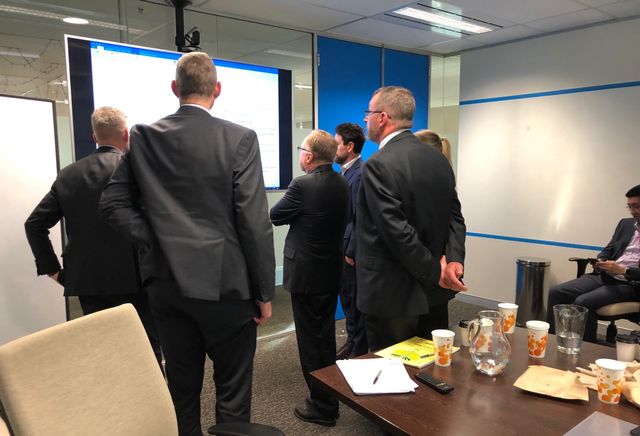 Thousands of internal ABC emails being gone through by the AFP [source: Twitter @TheLyonsDen]

After 11 a.m. today, AFP officers entered the Sydney building of the Australian Broadcasting Corporation (ABC) with a search warrant, referencing 2017 reports detailing the involvement of Australian troops in extrajudicial killings and other violations of international law in Afghanistan.

The raids are a major assault on freedom of the press. They are a dramatic escalation of a protracted campaign by the Liberal-National Coalition, the Labor Party opposition, and the entire political establishment, to criminalise the exposure of government crimes on the pretext of protecting “national security.”

The police warrant for the search of Smethurst’s house allowed them to examine her computers and mobile phones. An AFP statement said that the raid was part of “an investigation into the alleged unauthorised disclosure of national security information” and “alleged publishing of information classified as an official secret.”

The investigation is reportedly over an April 2018 article by Smethurst, revealing that the Coalition government was moving to enable the Australian Signals Directorate (ASD), the country’s main electronic eavesdropping agency, to carry out domestic spying operations, including against Australian citizens.

The ASD is legally barred from spying on Australian targets. Under existing legislation, it can only provide “technical advice” to the AFP and the domestic spy agency, the Australian Security Intelligence Organisation.

Already, in 2013, however, US government documents leaked by Edward Snowden revealed that the ASD collaborated with the US National Security Agency to conduct mass surveillance operations, likely including against Australian citizens.

The government’s proposed changes in 2018 would have formalised these spying operations, giving the ASD the power to access bank accounts, text messages, emails and other electronic communications. Smethurst’s report indicated that it was seeking to expand warrantless surveillance, allowing ASD snooping with ministerial permission rather than a court order.

The proposal came just months after the Coalition government, with the support of the Labor opposition, established a new Home Affairs Ministry overseeing the operations of ASIO, the AFP and the Australian Border Force. This was aimed at creating a body, modelled on the US Department of Homeland Affairs, to integrate the operations of the security agencies to enable further attacks on democratic rights.

When the 2018 revelations were made public they were dismissed by Coalition Home Affairs Minister Peter Dutton as “nonsense.” Smethurst’s story, however, was immediately referred to the AFP for investigation.

News Corp Australia, the Murdoch-owned company which publishes the Sunday Telegraph responded to the raid yesterday by branding it “outrageous and heavy-handed.”

Defenders of civil liberties warned of the far-reaching implications of the raid.

Greg Barns, spokesman for the Australian Lawyers Alliance, stated: “Scrutiny of government agencies by the media is critical to a democracy, and it is very concerning that these security agencies seem to want to avoid any examination.”

The government has doubled-down. Asked if he was concerned about journalist’s homes being raided, Prime Minister Scott Morrison declared: “It never troubles me that our laws are being upheld.”

Morrison’s comments came amid indications that the raid on Smethurst is part of a broader crackdown on the press after the government was reinstalled in a federal election last month.

2GB presenter and Sky News commentator Ben Fordham yesterday revealed that after he aired a story about up to six refugee boats having recently travelled towards Australia, he was contacted by senior officials from the Home Affairs department.

They stated that they would be “investigating” the disclosure and asked Fordham to give up his source. Under Australia’s draconian border protection regime, refugee boat arrivals are subject to national security secrecy laws, even if those on board perish, or if they are intercepted by Australian Border Force or naval officers.

The approach to Fordham, who said yesterday he was concerned he could also be targeted with a raid, was followed by this morning’s attempt to search the ABC building.

While reports are scanty, the warrant reportedly names ABC investigative journalists Dan Oakes and Sam Clark, along with director of news, Gaven Morris. AFP officers are seeking to obtain thousands of emails, files, passwords and written documents from April 2016 and July 2017. They are reportedly investigating the 2017 publication of “The Afghan Files,” which exposed the killing of unarmed civilians by Australian troops, the desecration of corpses and other war crimes covered up by military command.

The two raids are part of a broader campaign against government whistleblowers. The government, with the support of Labor, is prosecuting a former intelligence officer, dubbed Witness K, and his lawyer Bernard Collaery, for exposing an Australian espionage operation against the tiny state of East Timor.

David McBride, a former Australian military lawyer, also faces the prospect of a lengthy jail sentence if he is convicted over the alleged leak of documents to journalists containing evidence of war crimes committed in Afghanistan by Australia’s Special Forces.

Successive Labor and Coalition governments have expanded laws which abolish any whistleblower protections, even if leaks expose illegal actions.

The raid against Smethurst, however, raises the prospect of prosecutions of journalists and media organisations for publishing leaked material, in a direct attack on freedom of the press.

This was signalled by the phrasing of the warrant, which reportedly stated that the raid was partly in relation to the “alleged publishing of information classified as an official secret, which is an extremely serious matter that has the potential to undermine Australia’s national security.”

The phrasing corresponds to Espionage and Foreign Interference legislation passed last year by the Coalition, with the full support of Labor. The new laws make it a criminal offense to “deal with” information that “harms” “national security.” “Deal with” is defined to cover a long list of activities: “collect,” “possess,” “make a record of,” “copy,” “alter,” “conceal,” “communicate,” “publish” and “make available.”

Journalists have a limited defence, if they “reasonably believe” the information they published was in the public interest. However, this proviso is entirely undefined and subject to interpretation, meaning that journalists and media organisations could still face prosecution.

The AFP raids are part of a deepening assault on the democratic rights of the population, which is aimed at suppressing growing opposition to militarism, war, social inequality and the escalating expansion of police powers. In both cases, journalists who have revealed evidence of crimes by the government and military are raided and implicitly threatened with criminal prosecution.

This is part of a broader drive by governments around the world to abolish freedom of the press and other fundamental civil liberties. The sharpest expression is the attempt by the US administration of President Donald Trump to prosecute WikiLeaks founder Julian Assange for his role in exposing US war crimes and diplomatic intrigues.