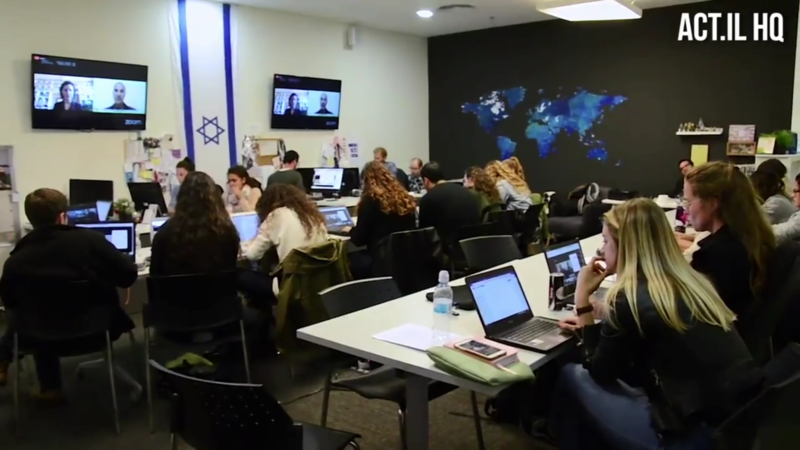 A global influence campaign funded by the Israeli government had a $1.1 million budget last year, a document obtained by The Electronic Intifada shows.

Act.IL says it has offices in three countries and an online army of more than 15,000.

In its annual report, from January, Act.IL says its goal is to “influence foreign publics” and “battle” BDS – the boycott, divestment and sanctions movement for Palestinian rights.

Through its app, Act.IL issues “missions” to this troll army in exchange for “cool prizes” and scholarships.

The app directs comments towards news websites in support of Israeli wars and racism, while attacking Palestinians and solidarity campaigners.

Act.IL’s report was obtained by The Electronic Intifada thanks to researcher Michael Bueckert.

Bueckert monitors the app, and posts screenshots of its missions to the Twitter account Behind Israel’s Troll Army. 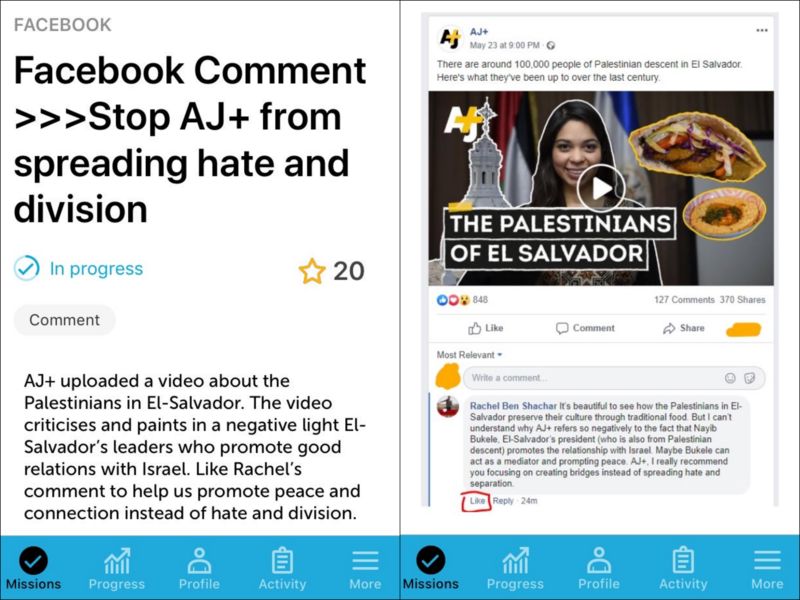 Act.IL directs users of its app to promote negative comments on Facebook videos about Palestinians, such as this one about the Palestinian community in El Salvador. (Michael Bueckert)

The report was sent out to app users. You can read it in full below.

As well as its Israeli headquarters, the report lists seven offices – its “media rooms.”

These are mainly in the US, with the report giving details from its New Jersey, Boston, Philadelphia, Orange County, New York, Florida and then-forthcoming Los Angeles offices.

The home page of Act.IL’s website sports a British flag alongside the Israeli and American, suggesting the organization has another “local media room” in Britain. 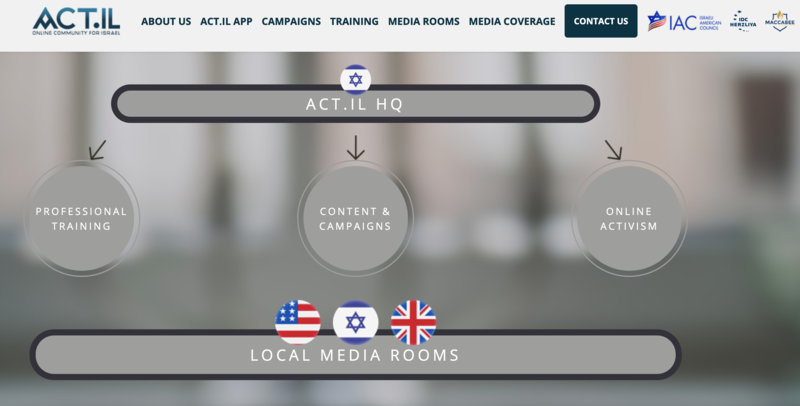 The report doesn’t give details of any UK office. But it does name UK lobby group We Believe in Israel and the far-right group Sussex Friends of Israel as among its “partnerships.”

We Believe in Israel’s director, the right-wing Labour activist Luke Akehurst, did not reply to a request for comment.

Act.IL claims to be a “grassroots” group, but has been described by one expert as “advanced digital political astroturfing” – in other words, a fake “grassroots” campaign.

The app’s users pose as ordinary members of the public. But many of the most active users are actually Act.IL staff.

At least six out of nine “top activists” named by Act.IL in a screenshot from April work for the group, an investigation by The Electronic Intifada has established.

Screenshots from the app’s rankings taken in June provided to The Electronic Intifada by Bueckert show that four of the top 11 “activists” this month are actually current or former Act.IL staff. 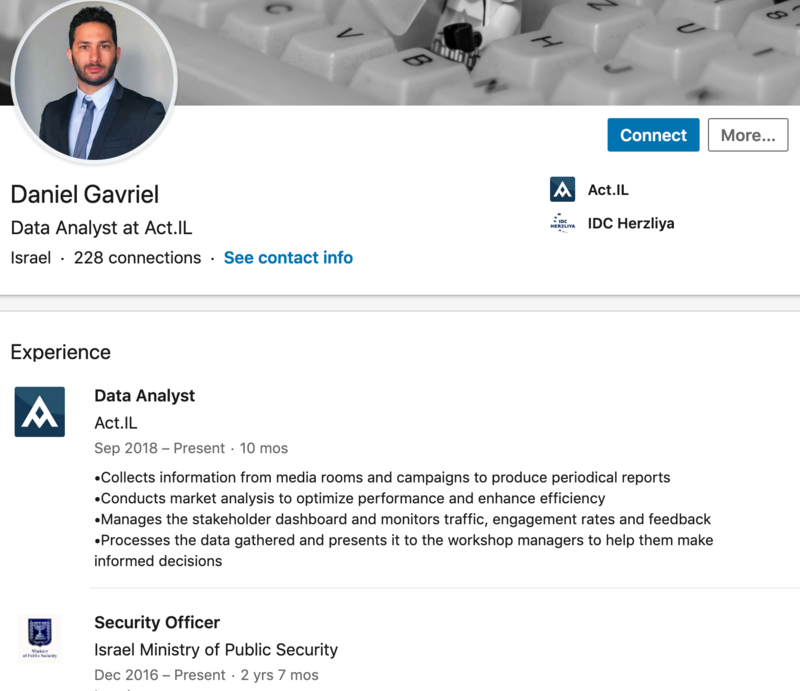 This Act.IL staff member is also employed by an Israeli ministry, according to his LinkedIn profile.

These include Lior Sirkis, a former Israeli army spokesperson, and Daniel Gavriel the group’s data analyst. According to his LinkedIn profile, Gavriel also works as “security officer” for Israel’s public security ministry – a government entity led by Gilad Erdan.

The report states that Act.IL has 13 employees plus 150 year-long interns.

Contrary to claims about being run by “volunteers,” in a Hebrew-language interview with Forbes Israel last year, the group’s chief executive Yarden Ben Yosef admits students help Act.IL “in return for a scholarship.”

The report obtained by The Electronic Intifada makes it clear that Act.IL employees and volunteers are told not to disclose their links to the organization while disseminating Israeli disinformation.

Despite the report’s spin about “online community,” a freedom of information disclosure by an Israeli media watchdog has shown that Act.IL was actually founded partly thanks to Israeli government money.

Watchdog The Seventh Eye revealed that Israel’s Ministry of Strategic Affairs spent almost $2 million on one propaganda campaign in 2017 – part of which was allocated to Act.IL.

The ministry is responsible for Israel’s semi-covert “war” against BDS, and had a budget of almost $13 million that year alone.

The “no logo” strategy Act.IL describes is identical to how other global proxy organizations for Israel’s anti-BDS ministry operate.

The Israel Project for example, supplies what it calls “white label,” unbranded material to launder through other groups.

This was revealed in The Lobby – USA, a four-part documentary by Al Jazeera’s investigative unit. You can watch the relevant clip in the video above.

The film was suppressed after an Israel lobby campaign targeting Qatar, the gas-rich Gulf emirate which funds the network.

But last year The Electronic Intifada obtained and released the full film.

In it, an Israel Project director said the group worked with many other organizations, explaining: “We produce content that they then publish with their own name on it.”

If the report’s figures are accurate, Israeli government funding seems to account for a majority of the group’s 2017 budget – the same year it launched the app.

The report does not disclose Israel’s Ministry of Strategic Affairs as being among the funders it lists – though it does thank “private anonymous donors.”

The ministry’s director general has made it clear that their work “stays under the radar,” and has attempted to change Israeli law to render it classified in the same way as Israeli intelligence agencies.

In 2017, Erdan explained why his ministry uses front organizations like Act.IL: “Most of the ministry’s actions are not of the ministry, but through bodies around the world who do not want to expose their connection with the state.”

But as the Israeli news report in the video below shows, Act.IL is one of the Israeli government’s less subtle projects.

Erdan himself launched the app at a lavish rooftop party in New York in 2017, doing his best “down with the kids” act by donning a DJ’s headphones.

Posing for the cameras with him was model and former Miss Israel Yityish “Titi” Aynaw.

A former platoon commander overseeing the anti-Palestinian checkpoints that surround Jerusalem, the Ethiopian-born Aynaw has been a high profile promoter of Israeli government propaganda since winning the 2013 beauty contest.

That year, Israeli President Shimon Peres introduced her to US President Barack Obama at a reception.

Despite her efforts to spin Israel as a beacon of diversity, she admitted in January to fearing for her life due to the Israeli police’s racism.

In an opinion piece for news website Ynet, she recounted being frequently asked by US students about racism against Black people in Israel.

She admitted to ambivalence about her efforts to deflect these questions: “In recent years, it has become hard to say it and mean it.”

But such doubts didn’t stop Aynaw from starring in the Ministry of Strategic Affairs’ glossy online launch video promoting the Act.IL app as “the easy way” to spread Israel’s message.

Over the last year, since The Electronic Intifada and other publications have exposed Act.IL’s activities, the group has taken measures to obscure its links to the Israeli government – all while claiming to be a grassroots “student initiative.”

One of the ministry’s websites – named 4IL – was set up in 2017 and was initially dedicated to promoting the Act.IL app.

At first, the site’s home page displayed the ministry’s small logo at the top. But as of this writing, it has been moved to the bottom, where it is easy to miss.

All mention of Act.IL and its app appears to have been recently scrubbed from the site.

“They’re trying to create some sort of firewall,” researcher Michael Bueckert told The Electronic Intifada. “Whereas 4IL is explicitly a ministry, Israeli government campaign, they’re trying to sell the app itself as entirely independent from the government.”

Although these ties to the state are now more obscure, there’s no doubt they remain a reality.

The 4IL site also seems to have links to Prime Minister Benjamin Netanyahu himself.

Clicking on a tiny “Contact us” web link on the front page opens a new message addressed to a “pmo.gov.il” email address – the Israeli prime minister’s office.

Act.IL’s interventions are not limited to social media.

The leaked report gives one “case study” of how they got a Palestinian American student fired from his paid campus position after a Facebook posting, which included a joking promise to “physically fight” anti-Palestinian students.

Hamzeh Daoud wrote that he wanted to “abolish” Israel.

The report says Act.IL led a campaign of more than “4,500 emails that were sent to the administration” with thousands signing a petition against Daoud.

It states that the university “decided to fire the student.” In reality, Daoud resigned his post – although apparently under pressure.

Another part of the report – with typical disregard for the truth – claims that when Act.IL’s Boston office “disrupted a BDS resolution and blocked its passing” that “The Electronic Intifada wrote an article calling the Boston media room ‘agents of Mossad.’”

In reality the article in question, by The Electronic Intifada’s Nora Barrows-Friedman, did not mention the Mossad.

Much of the last several years of the establishment media’s time has been wasted raising hell about supposed Russian interference in US elections, despite a lack of real evidence.

Israel’s interference in western democracies, however, is now very well documented, and is often quite open.

This newly obtained Act.IL report seems to have been pitched at expanding its funding base beyond the Israeli state, and openly speaks of aiming to “influence foreign publics.”

It boasts of manipulating “international public opinion towards the state of Israel via social media platforms.”

Yet – exactly as in the case of The Israel Project – Facebook and the other Silicon Valley giants have so far refused to take action.

Who has the political will to do something?

With translation by Dena Shunra.