Here is some fakenews from the Guardian which falsely claims that Iran breaks the nuclear deal. 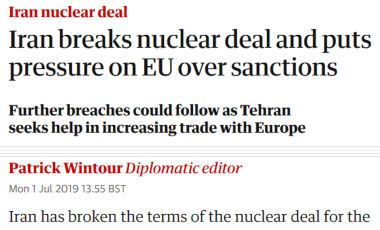 Iran today announced that its stockpile of low enriched uranium now exceeds the 300 kilogram of enriched uranium hexafluoride (UF6) level set out as a limit in the Joint Comprehensive Plan of Action (pdf).

But Iran does that within the frame of the JCPOA. It is not breaching it. Article 26 of the joint plan states that the U.S. will refrain from reimposing sanctions and that Iran will react in case that happens:

The United States will make best efforts in good faith to sustain this JCPOA and to prevent interference with the realisation of the full benefit by Iran of the sanctions lifting specified in Annex II. The U.S. Administration, acting consistent with the respective roles of the President and the Congress, will refrain from re-introducing or re-imposing the sanctions specified in Annex II that it has ceased applying under this JCPOA, without prejudice to the dispute resolution process provided for under this JCPOA.

The U.S. Administration, acting consistent with the respective roles of the President and the Congress, will refrain from imposing new nuclear-related sanctions.

Iran has stated that it will treat such a re-introduction or re-imposition of the sanctions specified in Annex II, or such an imposition of new nuclear-related sanctions, as grounds to cease performing its commitments under this JCPOA in whole or in part.

On May 8 2018 the United States broke the JCPOA when it reimposed sanctions on Iran. Iran can not “break” a deal that the U.S. already broke.

Additionally on May 3 2019 the State Department removed sanction waivers that allowed Iran to export low enriched uranium in exchange for natural uranium:

In addition, any involvement in transferring enriched uranium out of Iran in exchange for natural uranium will now be exposed to sanctions. The United States has been clear that Iran must stop all proliferation-sensitive activities, including uranium enrichment, and we will not accept actions that support the continuation of such enrichment.

We will also no longer permit the storage for Iran of heavy water it has produced in excess of current limits; any such heavy water must not be made available to Iran in any fashion.

This step by the Trump administration was obviously designed to bring Iran into a situation where it would have to either stop enrichment, or accumulate a stockpile larger than the 300 kilogram foreseen in the JCPOA.

Iran can no longer export low enriched Uranium. Iran does not want to give up its “inalienable right” to enrich uranium guaranteed under the Treaty on the Non-Proliferation of Nuclear Weapons (NPT). Iran thus began to accumulate enriched uranium under the above clause of the JCPOA.

On June 17 Iran announced that it would exceed the stockpile limit by June 27. It took a few days longer but it now happened.

The JCPOA clearly states that Iran would take this step if and when the U.S. breaches the agreement by imposing new sanctions. That Iran is now exceeding one of the limits JCPOA sets out is not in breach of the agreement but in adherence to its letters.

A ‘diplomatic editor’ who does not understand that should seek a different profession.

Iran’s Foreign Minister Javad Zarif just pointed out that the primary Iran’s legal reason for its move is the unwillingness of the European 3 (UK, France and Germany) to stick to their commitment under the nuclear deal.

Javad Zarif @JZarif – 17:43 utc – 1 Jul 2019We have NOT violated the #JCPOA. Para 36 of the accord illustrates why: We triggered & exhausted para 36 after US withdrawal. We gave E3+2 a few weeks while reserving our right. We finally took action after 60 weeks. As soon as E3 abide by their obligations, we’ll reverse.

When the U.S. left the agreement Iran used the Dispute Resolution Mechanism in paragraph 36 of the JCPOA. That paragraph calls for a joint commission to decide on the issue. The commission met in Brussels in July 2018 and promised to further support the deal.

The 6 July 2018 Statement from the Joint Commission of the Joint Comprehensive Plan of Action in which the EU-3 committed themselves to uphold their side of the deal despite the U.S. breach said:

6.​The participants recognised that, in return for the implementation by Iran of its nuclear-related commitments, the lifting of sanctions, including the economic dividends arising from it, constitutes an essential part of the JCPOA.
…
8.​The participants affirmed their commitment regarding the following objectives in good faith and in a constructive atmosphere:- the maintenance and promotion of wider economic and sectoral relations with Iran;
– the preservation and maintenance of effective financial channels with Iran;
– the continuation of Iran’s export of oil and gas condensate, petroleum products and petrochemicals;
…

The EU-3 did not fulfill those commitments.

The Dispute Resolution Mechanism in paragraph 36 of the JCPOA states:

If the issue still has not been resolved [by the joint commission] to the satisfaction of the complaining participant, and if the complaining participant deems the issue to constitute significant non-performance, then that participant could treat the unresolved issue as grounds to cease performing its commitments under this JCPOA in whole or in part and/or notify the UN Security Council that it believes the issue constitutes significant non-performance.

This legal argument is even stronger than the argument under paragraph 26 discussed above.

One thought on “No, Iran Does Not Break The Nuclear Deal (Updated)”