It comes as no surprise that the American public remains oblivious to a not-so-slight glitch in the 5G Race with China as the US strives to be the first, the best and most technologically advanced country in the world with its guarantee of a Brave New World. But then, many Americans are unaware of the true nature of 5G in the first place.  In its haste to win, the telecom industry, its friends in Congress and the Federal bureaucracy are intent on foisting 5G on a largely unsuspecting American public before all the technological kinks have been worked out.

But no worries; it’s just a wee small hurdle that the American public need not fret about; unless of course they are not willing to risk their families, their homes and their lives to the devastation of an unpredictable weather disaster and community crises that might have been avoided if envisioned beforehand.

Just to be clear:  5G is the generation of wireless technology that follows 4G LTE mobile connections.  It operates on a higher radio frequency spectrum called millimeter waves which  delivers data more quickly.  However its signal does not travel well through physical objects such as buildings and houses and trees and its waves may be absorbed by rain and humidity.  Millimeter waves also have limited range.  5G signals cover less than one square mile from the cell tower only allowing devices in close proximity to link to the network.  Construction of multiple 5G cell towers will be required every 500 feet in order for devices to stay connected.  Companies like T-Mobile are working to increase the radius requiring different radio spectrums. While telecom carriers have great ambitions, they do not own sufficient Spectrum to make 5G feasible and will need to rely on Federally owned Spectrum to be available.

What remains from view are the real-time implications of a Massive Internet of Things (MOIT) and a world of Artificial Intelligence ravaging a country once committed to its Constitution and a democratically elected government as the American Way of Life unrivaled on the planet.

The kerfuffle began unnoticed on April 17, 2018 when the FCC announced it would auction licenses for use of the electromagnetic spectrum for 24 GHz band with regard to development of the Fifth Generation (5G) wireless technology with no interagency consensus on fundamental decisions and procedures.

At issue is whether 5Gs proposed 24 GHz spectrum would create interference to NOAA’s adjacent passive weather sensors at 23.6-23.8 GHz; thereby inhibiting proper assessment of Earth observation sensors and microwave satellites in predicting weather threats to the mainland US.  Since NOAA, the National Weather Service and NASA are all agencies within the Department of Commerce with shared weather jurisdiction, their scientists and outside meteorologists have concluded there is a problem. 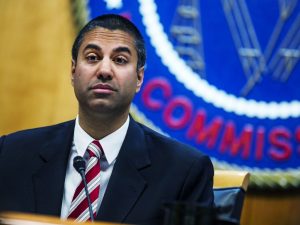 Since the FCC was preparing to auction 2,909 licenses in the 24.25 to 25.25  spectrum bands on March 14, 2019, Commerce Secretary Wilbur Ross and NASA Administrator Jim Bridenstine invited FCC Chair Ajit Pai (image on the right) in its February 28th letter to attend an interagency meeting on March 11th convened by NASA to “continue the long-standing interagency reconciliation process on this important topic.”  The Ross letter alsorequested that the FCC remove a policy paper from its website  ‘immediately” as

‘there was no consensus in the interagency on this topic and would have a significant negative impact on the transmission of critical earth science data. It is essential that protections are established for the critical operation of NASA, the Commerce Department and our international partners in the 23.6 to 24 GHz spectrum band.”

In a March 8th response to Ross and Bridenstine, Pai refused their invitation and stated that the Commission had already “engaged extensively” with NASA and that the State Department had, as arbiter, sided with the FCC:

“Given the lack of respect for the Department of State’s decision and the deliberate and ongoing efforts to undermine the U.S. Government’s proposal both here and abroad, the FCC will respectfully decline the invitation to attend the March 11 meeting.”

“NOAA, NASA, and DOD have used satellite-borne microwave sensors to measure water vapor since the 1970s. Water vapor data is essential to the numerical weather prediction of rainfall and drought and helps increase the precision of such predictions. Water vapor measurements are also important in increasing accuracy of tracking hurricanes and monitoring sea ice, sea surface temperature, and soil moisture. Due to the specific properties of water vapor, it cannot be measured in frequency bands other than those currently allocated.”

Water vapor, rather than co2, is acknowledged as the most prevalent of the greenhouse gases.

In his April 29th response to Johnson and Lucas, Pai wrote to inform them after the FCC had  gone forward with the auction:

“based on the record compiled by the Commission, the FCC concluded that these rules would protect the 23.6 – 24 GHz band from interference.”

On May 13, Senators Ron Wyden (D-Or) and Maria Cantwell (D-Wash) wrote to Chair Pai to request that the FCC

“not award any final license to winning bidders for the 24 GHz  Spectrum until the FCC approve the passive band protection limits that NASA and the NOAA determine are necessary to protect critical satellite-based measurements of atmospheric water vapor needed to forecast the weather.”

On May 16th, NOAA scientists testified before the House Subcommittee on the Environment regarding The Future of Forecasting that “satellites would lose approximately 77 percent of the data they’re currently collecting, reducing our forecast ability by as much as 30 percent.”

On June 12th, the Senate Commerce Committee held an oversight hearing on the FCC with the following exchange (2:15) regarding the 24Ghz – weather forecasting issue:

Unfortunately some folks in the Federal government believe wrongly that, for whatever reasons, development of 5G technology and other bands shouldn’t happen; they believe it to be an unacceptable risk to some Federal uses.  I firmly reject those determinations especially in 24 GHz band.  It has been difficult to have a framework where we can work cooperatively with some of our sister agencies.  Unfortunately, one department  has been very active in trying undermine the US position in these international negotiations and make it more difficult to free up spectrum in 5G”

“I have not been in the meetings the Chairman refers to. We have to resolve these issues before we put the spectrum to market in an auction. The idea that this one part of the administration is not talking to another; we bring these air waves to market, ask carriers to spend billions of dollars on them and then don’t exactly know what the terms of service look like all the while we are headed into world radio conference and possibly undermining our ability to negotiate these issues.  We’ve got to figure this stuff out before we hold an auction otherwise the integrity of our future auction structure are at stake.”

“It’s not just about 24GHz.  It’s about every other band we are talking about in the millimeter wave.  They want to come back retest and rechallenge decisions that we are making; that’s very problematic.  24 is only so value; there are other bands that are going to be more valuable for different technologies; I think this is about precedent setting and why they are talking about a sensor that doesn’t exist on the satellite.”

“We have waited for a validated study; one study contained flawed assumptions made the study meaningless.  The Dept of Commerce has been “blocking our efforts at every single turn and situation has gotten worse since head of NTIA resigned.”

“Does each member of the Commission agree with the scientific conclusion of this issue?”

“The proposed FCC protection limits have been and will continue to be appropriate for protection of passive weather sensors..”

“I’ve not been at the meetings that gotten to the bottom of just what threshold for out of band emissions should apply.”

In other words, the 24GHz is still outstanding issue.

In their June 19th letter to Secretary of Commerce Wilbur Ross,  Chair Johnson and ranking member Lucas followed up, after having been dismissed by Pai, expressing

“deep concern about the potential for degradation of our Nation’s weather forecasts by interference from spectrum recently auctioned off by the FCC.”

The June 19th letter included reference to NASA Superintendent Jim Bridenstine’s testimony on April 2, 2019 before the House Science Committee that

“… there is a risk that depending on the power and the position of the cell towers in the 5G network, it could bleed over into our spectrum and that’s the risk.  And the assessments that NASA has done in conjunction with NOAA have determined that there is a very high probability that we are going to lose a lot of data.”

In conclusion, the June 19th letter stated that

“The Committee must have the most complete information to inform us about those contradictory statements and there is limited time available as the World Radiocommunication Conference occurs in October of this year.  The US must submit its official position on allowable levels of noise in the 24 GHz band in advance of the conference.“

If enacted, the Spectrum Now Act S. 3010  would “significantly accelerate” making more Federally owned spectrum, which is a finite resource,  available that is currently not available open for commercial use including the mid-band spectrum.

What FCC Commissioner O’Reilly is referring to when he mentions ‘bands that are going to be  more valuable for future technologies” is the amount of Spectrum that will be required to fully develop MIoT and Artificial Intelligence technologies. When O’Reilly mentions the ‘precedent setting” nature of the Commerce Department’s opposition to 24 GHz, he is confirming that those ‘future technologies’ will require a very high investment of Spectrum that will, by necessity, come from Federally/taxpayer-owned Spectrum.  In other words, the NTIA process to identify future 5G Spectrum requirements and which Federal agencies will be required to acquiesce their Spectrum, just as Commerce is being pressured to capitulate, promises to be a make-it-or-break-it for 5G development.

FCC Chair Ajit Pai, a former Verizon attorney who lobbied against net neutrality was appointed to the FCC by President Barack Obama in 2014, warned that

“If the Department of Commerce’s position were to prevail, not only would this spectrum be unusable for 5G domestically, but we would also put at risk the U.S. position at the upcoming international conference in October.”

Renee Parsons has been a member of the ACLU’s Florida State Board of Directors and president of the ACLU Treasure Coast Chapter. She has been an elected public official in Colorado, an environmental lobbyist with Friends of the Earth and staff member of the US House of Representatives in Washington DC. She can be found on Twitter @reneedove31