In August 2013 the BBC produced a fake video headlined “Saving Syria’s Children” about an alleged chemical weapon attack in Syria which it claimed was caused by the Syrian government. Robert Stuart has since pressed the BBC to admit the obvious fabrication of these scenes.

Today the BBC posted on its website another Syria clip under the title Idlib’s secret hospitals hiding from air strikes:

Air strikes have been targeting hospitals in the rebel-held province of Idlib, Syria, despite the fact that it is a war crime. Medics have been forced underground in order to survive.

The UN accuses the Syrian government and allied Russian warplanes of conducting a deadly campaign that appears to target medical facilities.

Sommerville starts with standing next to a destroyed building claiming that it has been a hospital that was bombed. He says: “This is the only building that was targeted here.” 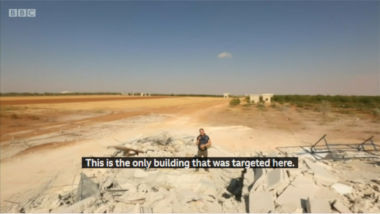 The next shot has been shown in other TV clips (on Channel 4?). It shows the entrances to some caves but no car, no persons and nothing else is around it. 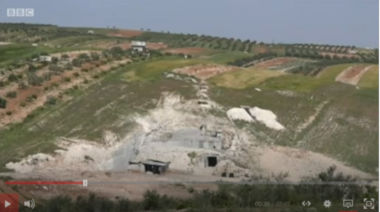 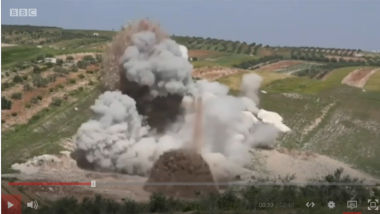 Immediately after the explosions, but not before them, the sound of a passing jet is heard.

I have never heard or seen of a jet that manages to release six bombs that land in such a tight pattern and explode all at the very same time. Compare the impact pattern and explosion timing with this recent U.S. carpet bombing (vid) of an island in Iraq. And why please was the camera in place that made such a tight shot of it?

This was clearly a stunt made with some buried explosives that were centrally ignited at the same time. The jet noise was later added to the shot.

In the next scene two people walk down a concrete stairway within a regular building. The scene cuts to one filmed at the entrance of roughly dug cave while the reporter insinuates that both are the same. 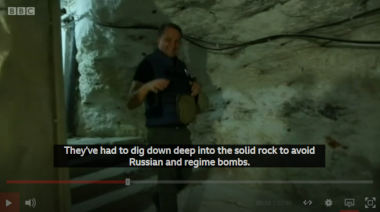 The reporter claims that the cave is a hospital. 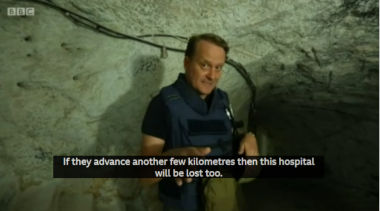 He walks further down the stairs into the cave …

… and ends up in a well built building with straight painted walls and a nice balustrade. This might be a hospital but there is no sign that it is one. What is certain is that it is not underground or in a cave. 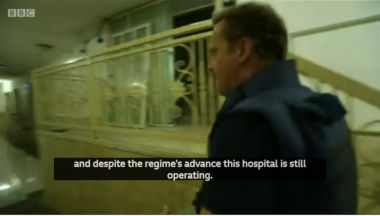 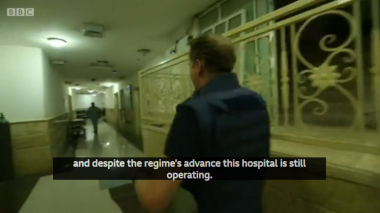 The clip continues with Sommerville talking to some ‘doctor’ who answers in Arabic. 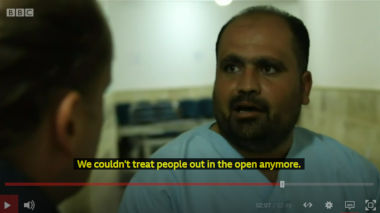 Then follow scenes from the Atmah Charity Hospital which is a real hospital. It lies north of Idleb city and right next to the Turkish border near the Olive Tree refugee camp near the town of Atmah. It is sponsored by Orient Charity, established by the Syrian anti-Assad businessman Ghassan Aboud who lives in the UAE, and is operated by the Muslim Brotherhood aligned Syrian American Medical Society (SAMS). Ghassan Aboud also owns Orient News which is a Jihadist outlet. There follow the typical pictures of injured children which are used to create more hate against the Syrian government and the millions of children it protects from the U.S. sponsored Jihadists attacks. 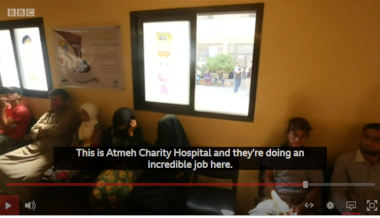 On his Twitter account Quentin Sommerville posted another version of his Idleb tale. It is longer and the cut differs significantly from the clip on the BBC website. 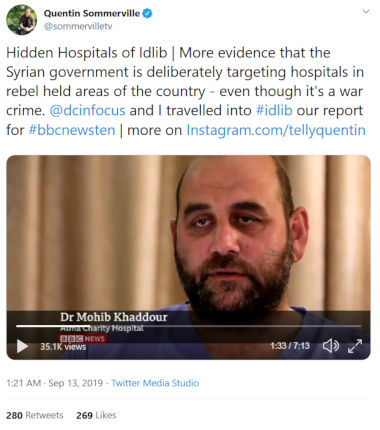 Some scenes are similar. The ‘bombed hospital’ is there. The fake ‘bombing’ of the caves is also in it. The interview scene with the Arabic speaking doctor in the ‘underground hospital’ is missing in this version but the same person reappears.

Sommerville speaks with the UN Humanitarian Coordinator for Syria about the coordination system for hospitals. The hospitals are supposed to tell the UN there geographic coordinates which the UN then hands to Russia with the request not to bomb those places. The UN’s Pomos Moumtzis defends the system. Sommerville claims that 40 such hospitals have been bombed in recent months. Syria’s Idleb governorate never had that many hospitals.

What is happening here is that the Jihadis, with whom Sommerville traveled and who he rightly says are seen as terrorist even by the ‘west’, report the coordinates of their headquarters and weapon depots as hospitals. The UN has no way to check their claims. When the Russian or Syrian airforce then bomb those places the Jihadis claim that their hospitals were hit.

There are more false sequences in the longer clip Sommerville tweeted.

At 4:27 the cameraman rides on the back of a motorcycle through a covered alley or basement into a ‘hospital entrance’. More than a dozen motorcycles are parked there and there is professional ventilation. 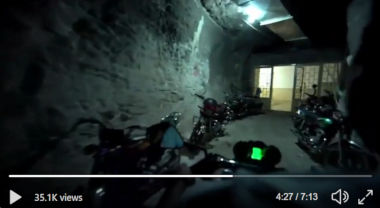 It is the very same ‘underground hospital’ and the same Arabic speaking ‘doctor’ as in the first clip. Notice that the ‘doctor’ rode his motorcycle through town while wearing his supposedly clean clinic clothes. Sommerville narrates: “This hospital is very deep out of reach of the bombs. We were told to move fast too.”

The above scene cuts to two men running down a basement stairway seemingly from the hospital. It is the same stairway as in the first clip but filmed from a slightly different perspective and in a different take. 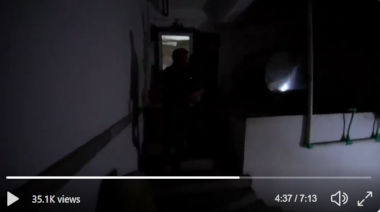 Summerville continues: “Even under this solid rock we await the next attack.” The scene cuts to two men running down an underground tunnel with rough walls. 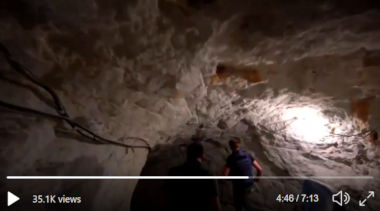 It is the same tunnel as in the first clip.

The sequence as a whole makes no sense. If the hospital is ‘out of reach of the bombs’ why run further down from it?

Which is the real sequence Mr. Sommerville? Is the hospital at the lower end of the rough wall tunnel or is it at the upper end? Could you please make up your mind?

At 5:00 min Sommerville says that he travels further south towards the frontline escorted by the Jihadist controlled ‘Salvation government’. The scene cuts to a drone shot of a refugee camp insinuating that it is in the same southern area. But the camp is like all refugee camps in Idleb in the north directly at the Turkish border. The border wall which Turkey erected can be clearly seen behind it. The place is far from the frontline. 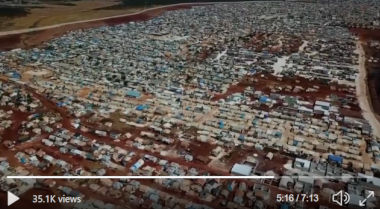 The two Sommerville videos show how the BBC works. First a politically wanted narrative is created. Scenes are then taken and cut into sequences that fit that narrative. The same or similar scenes can be used to create a different version of the same narrative or even a completely different one. Neither of those narratives needs to be anywhere near the realities on the ground.

Unfortunately many people fall for such cheap propaganda junk.