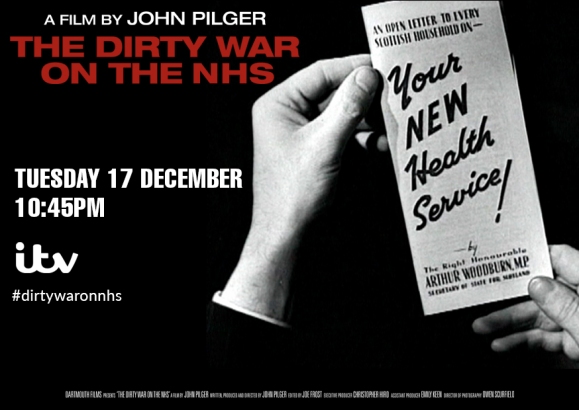 Today, Tuesday 17 December, John Pilger’s film about the threat the NHS will be shown on ITV – full details below.

Please tell everyone you know about the film – on social media and in person.

If you miss the screening on Tuesday, you can catch it again for a month on the ITV Player.

Many thanks for your support.

You can help us by:

TELLING your friends, family, colleagues, neighbours and contacts about the film and share this page: thedirtywaronnhs.com

“The Dirty War On The NHS—Fierce and necessary”
Peter Bradshaw, The Guardian

“The threat our most cherished of institutions faces is laid bare in a timely and thoroughly researched documentary by journalist John Pilger”
Dan Carrier, Camden New Journal

“The NHS many of us take for granted appears to be on life support and Pilger’s documentary produces some troubling evidence”
Steven Sheehan, The Digital Fix