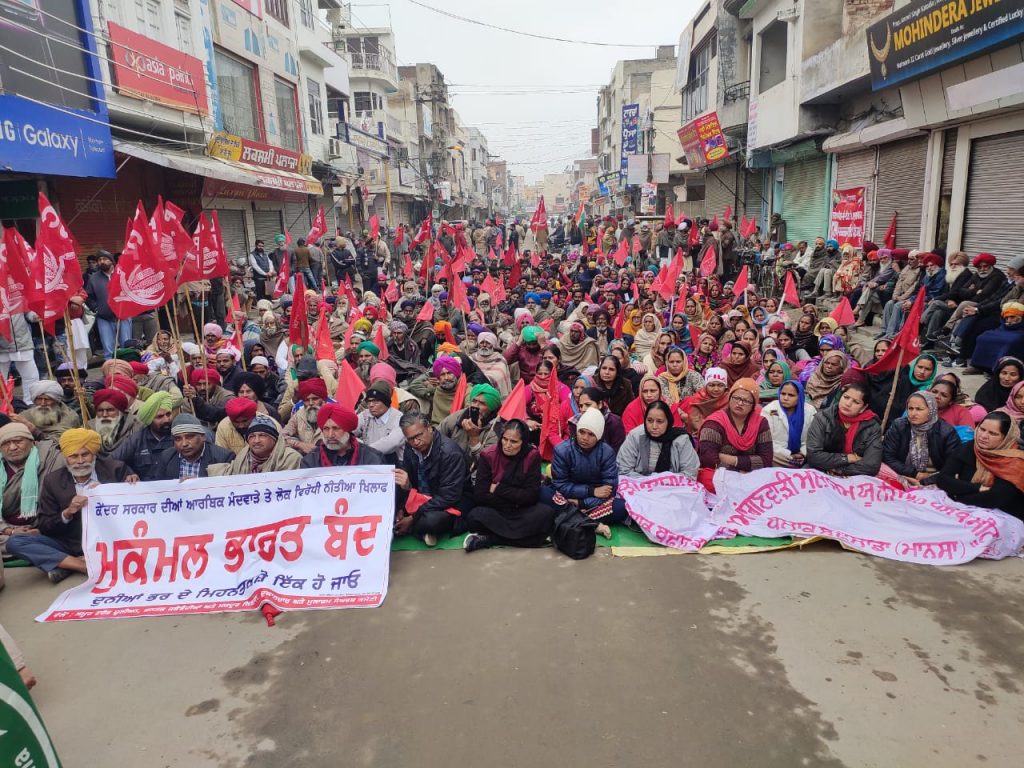 India woke up on January 8, to witness the largest ever strike with an estimated 25 crore (250 million) workers, employees, farmers and rural labourers stopping work and hitting the streets to protest against the Modi government’s economic policies and divisive politics.

Besides this, workers in the private sector across engineering, automobile and components, telecom, metals, textiles and garments, power and many other sectors were on strike.

Transport was affected throughout the country as trucks, buses, autorickshaws, taxis were off the roads in most parts while railway workers held protest demonstrations. In many parts, like West Bengal, Bihar, Punjab etc., rail services were blocked by protestors. Protestors clashed with police in several states.

In rural areas, protests and traffic stoppages were seen in nearly 480 districts of the country as lakhs of farmers and agricultural workers, along with non-farm rural workers came out in protest, at the call of AIKSCC, an umbrella platform of over 175 organisations.

Students in over 60 universities and institutions, and their affiliated colleges, too, observed a strike with thousands joining protest marches after boycotting classes.

The protest strike was called by a joint platform of 10 central trade unions. Only one trade union, the Bhartiya Mazdoor Sangh affiliated to Rashtriya Swayamsevak Sangh refused to participate. However, it’s opting out doesn’t seem to have made any difference to the participation in strike, which was described as “unprecedented”. Support was extended by dozens of independent federations and unions.

A joint platform of 175 farmers and agricultural workers organisations also extended support and called for a simultaneous rural strike. The government had issued a warning to government and public sector employees to not participate in the strike and attend work. But this appears to have been roundly rejected.

Farmers and agricultural workers are demanding better prices for produce, increase in wages, and complete debt-waiver. Other prominent demands of workers and farmers are withdrawal of the communal citizenship laws (CAA and associated NPR/NRC process), end to attacks on minorities and those protesting against the government, and end to destruction of Constitutional provisions. The trade unions have also condemned recent attacks on students in Jamia Millia Islamia, Jawaharlal Nehru University, Aligarh Muslim University, Jadavpur etc.

The strike and protest actions have acquired a heightened intensity because of the Modi government’s recent moves to ask people to prove their citizenship, with a covert aim of targeting the minority Muslim community. This has led to massive protests throughout the past month and that anger, converging with the economic distress in the country, has found expression in the strike.

Over 7.3 crore people, mostly youth, are currently unemployed according to Centre for Monitoring Indian Economy estimates. This is perhaps the largest army of jobless people India has ever seen. The unemployment rate stood at 7.7% in December 2019, while in urban areas, it was even higher at a staggering 8.9%.

Meanwhile, retail prices of wheat have increased by 56%, atta (wheat flour) by 26% and those of rice by 14% in the past one year even as the Modi government was sitting on record stocks of foodgrain, some 567 lakh tonnes in December 2018, up 25% over last year, and more than double the foodgrain stocking norm of 214 lakh tonnes.

Long-standing demands of industrial and agricultural workers for fixing a dignified minimum wage have not been entertained by the government for over four years. In fact, changes in labour laws indicate that the government will allow increase in working hours but let employers fix their own wages by keeping statutory levels low.

There is widespread discontent and anger at the way Modi government has been kowtowing to corporate bigwigs and global corporations, even as it ignores the voices of working people in the country. Not only has it cut corporate taxes and given huge concessions to big industrialists the government has also opened up several sectors to private and even foreign capital, like coal, defence production and railways.

According to data put out by the finance ministry’s department of investment and asset management (DIPAM), the BJP government has sold off Rs.2.97 lakh crore worth of public sector assets in its rule since 2014. If you add the proposed sale of BPCL, CONCOR and SCI, the combined net worth of which is estimated at about Rs.76,000 crore, the total disinvestment done by government reaches Rs.3.73 lakh crore.

In rural areas, wages of agricultural workers have remained virtually stagnant for the past two years despite bumper harvests. Farmers have repeatedly protested and demanded increase in support prices and strengthening of procurement system in order to save them from pauperisation. With over half the country’s farmers indebted, and debt being the primary reason behind unconscionable suicides, the demand for complete debt waiver has also been repeatedly raised. But the Modi government continues to deceive farmers by claiming that it is already giving the needed price levels.

This is the fourth country-wide strike by workers during Modi’s regime, the earlier three being – September 2, 2015; September 2, 2016 and the two-day strike on January 8-9, 2019. Besides these, several sectoral actions have taken place, including since Modi 2.0 took over: protests by railway workers over corporatisation of several production units; strike by over one lakh workers of 41 ordnance factories; strike by over 6 lakh coal workers against 100% foreign direct investment; strike by bank employees against merger of 10 public sector banks; strike in all refineries, marketing and pipeline workers of BPCL and HPCL against privatisation, etc. Other sectors where actions have taken place include defence, construction and transport.

It is worth noting that since the imposition of neoliberal economic policies on the country began 28 years ago, workers have gone on strike 19 times pushing back several unjust and harsh policies. Similarly, farmers and agricultural workers have carried out massive movements including rallies at Parliament.

In recent years, students in universities have been agitating against fee hikes, throttling of democracy and, of late, against police atrocities. They have also joined or led protests against the Citizenship Amendment Act/National Population Register/National Register of Citizens for the past month.

The momentous strike of January 8, 2020, therefore, represents a convergence of all these streams and holds the promise of even wider struggles in the coming days.

Workers unity was on display Maharashtra, India’s most industrial state. Almost 26 unions, mainly having the influence in all industrial towns, participating in the strike.

“We are here to get what is our right. Also there is serious issue of inflation. The ASHA and Anganwadi workers are supporting the cause of labours across country,” said MA Patil, leader of their union.

Private bank employees, too, participated in good numbers during the agitation.

“In last four years, bank employees have seen one of the worst ever time in their career. That’s why there is anger among the bank employees across nation,” said Vishwas Utagi, banker and union leader.

Thousands of slogan-shouting activists and workers blocked Dak Bungalow square in the heart of Patna for several hours. Police lathi-charged them and arrested half a dozen of them.

Most of the banks, post offices, life insurance, electricity offices remained closed in Patna and across the state. In Patna, most of auto-rickshaws were off the road in support of the strike.

Trade union workers blocked NH 107 in Khagaria district,NH 31 in Khagaria and Begusarai districts and NH 57 , NH 83 in Gaya and Jehanabad districts and NH 104 in Madhubani district. State highways were blocked in Nawada, Siwan, Aurangabad, Arwal, districts with the road transport associations and unions supported the strike.

CPI(ML) leader Kunal said strike was totally successful as it was supported by people who have been affected by joblessness, privatisation, inflation and anti- workers and anti-people policies of Modi led central government.

Thousands of workers in Delhi NCR downed tools on Wednesday as part of the nationwide general strike. As a result, production in factories in and around the national capital was brought down to zero.

In Sahibabad industrial area of Ghaziabad district, production in thousands of small and medium establishments was severely affected. Among those that were hit by the strike were Central Electronics Limited (CEL), a public sector undertaking, whose workers observed a complete shutdown, protesting against the strategic sale of the ‘national asset’.

Similar demands were raised in the factories in north Delhi’s Wazirpur, Narela, Bawana, Jahangirpuri and east Delhi’s Patparganj, Shahdara among others. Rallies were organised, led by the trade unions.

In the Gurugram-Manesar-Bawal industrial belt, workers in hundreds came out on the streets to register their anger. Automobile leaders, namely, Honda and Munjal Showa were brought to a grinding halt.

Here, contractual workforce constituted the majority among the protesters. It is because as the auto Indian auto industry facing one of the worst crisis in 19 years, the contract worker is bearing the maximum brunt of it.

The struggle of the contractual staff in Manesar is being led by the casual workforce of Honda Motorcycle and Scooter India (HMSI), who have been braving the cold and staying put for more than 50 days to protest against the ‘illegal’ retrenchments by the management.

At Shivam Auto Tech, another major name in Manesar, the workers demonstrated outside the plant against the forced “lockdown” by the management.

At ITO, workers affiliated to the unions gathered in support of the general strike, despite the rain in the national capital.

Garments factories operating in Okhla Phase – 1 industrial area mostly stayed away from the strike as these do not have unions.

“The Union government is rushing up the process of privatisation and eyeing the railways. The government could not manage the economy of the country and now they want to sell railways to private parties” said RC Sharma, President of WREU and General Secretary of AIRF.

“This government has been trying to sell land belonging to Railways at prime locations to industrialists,” added Sharma.

Bankers said they were protesting as their salaries had not been revised.

“Closure of public sector banks across the state is concerning and will affect crucial business,” said Janak Rawal, General Secretary of MGBEA.

(Reports by Amey Tirodkar in Mumbai and Imran Khan in Patna, Ronak in Delhi NRC and Damayantee Dhar in Gujarat)