President Xi Jinping formally told WHO head Tedros Ghebreyesus, at their meeting in Beijing earlier this week, that the coronavirus epidemic “is a devil and we cannot allow the devil to hide.”

Ghebreyesus for his part could not but praise Beijing for its extremely swift, coordinated response strategy – which includes fast identification of the genome sequence. Chinese scientists have already handed over to Russian counterparts the virus genome, with snap tests able to identify it in a human body within two hours. A Russia-China vaccine is under development.

END_OF_DOCUMENT_TOKEN_TO_BE_REPLACED

And they call it democracy

Errol Graham was just four and a half stone when his emaciated body was found by bailiffs. The 57 year old had starved to death in a flat with no electricity or gas supply.

The only food in his cupboards were two tins of fish, four years out of date. His benefits had been stopped by the Department of Work and Pensions (DWP) only months before. As a vulnerable claimant with a long history of severe mental illness, he should have been protected. Instead, he was left to die.

END_OF_DOCUMENT_TOKEN_TO_BE_REPLACED 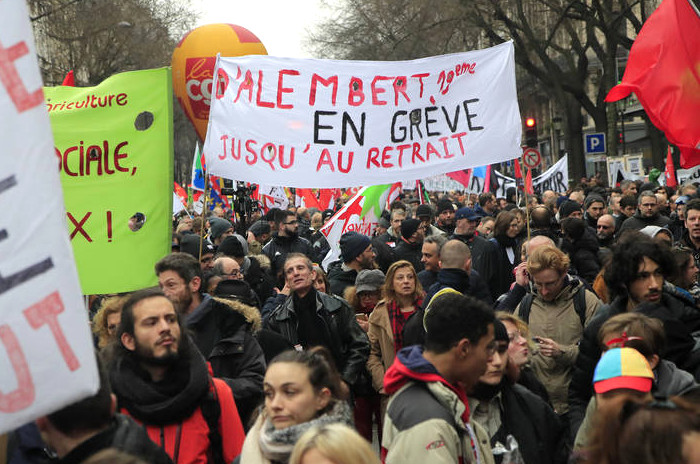 The nationwide general strike in France, now entering its record seventh week, seems to be approaching its crisis point. Despite savage police repression, about a million people are in the streets protesting President Emmanuel Macron’s proposed neoliberal “reform” of France’s retirement system, established at the end of World War II and considered one of the best in the world. At bottom, what is at stake is a whole vision of what kind of society people want to live in – one based on cold market calculation or one based on human solidarity – and neither side shows any sign of willingness to compromise.

END_OF_DOCUMENT_TOKEN_TO_BE_REPLACED END_OF_DOCUMENT_TOKEN_TO_BE_REPLACED

Randy Credico’s ongoing series of interviews on the approaching extradition trial of Julian Assange in London, featuring regular updates from the Courage Foundation

In this first podcast, hear compelling clips from William Kunstler and John Pilger on extra-judicial and arbitrary detention as well as interviews with Nathan Fuller, director of the Courage Foundation which supports whistle blowers and runs Julian’s public defense campaign, Coleen Rowley, retired FBI Special Agent and whistle blower, expert on criminal procedure constitutional law, and Anthony Papa, artist/activist and the author of 15 to Life: How I Painted My Way to Freedom, and This Side of Freedom: Life after Clemency.