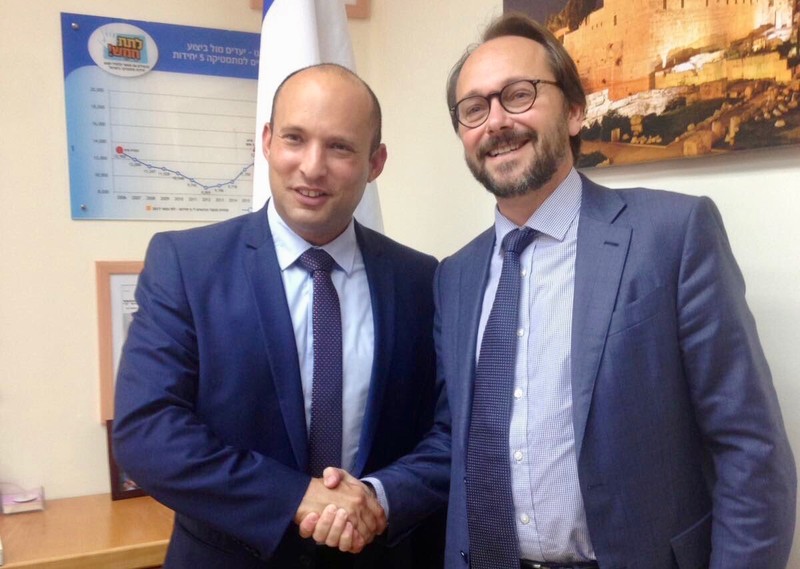 Israeli defense minister Naftali Bennett, left, with EU ambassador Emanuele Giaufret in 2017. Bennett is now hoping other countries will buy a coronavirus tracking system made by an Israeli spy firm implicated in the murder of Saudi journalist Jamal Khashoggi. (via Twitter)

The coronavirus pandemic is a priceless opportunity for governments and spy firms to expand their reach into people’s lives.

Public health authorities say effective contact tracing will be crucial to ending broad lockdowns and quickly halting new outbreaks of the virus, at least until a vaccine is developed.

That means surveillance technologies promising to quickly identify anyone exposed to the virus may indeed find a global market. The danger is that this kind of intrusive surveillance will become permanent.

One firm looking to capitalize on this opportunity is Israel’s notorious NSO Group.

This is the company that produces malware called Pegasus that can be surreptitiously inserted onto a target’s mobile phone.

It can then be used to funnel back almost any private information to those doing the spying, including recordings, screenshots, passwords and email and text messages.

Israel’s vaunted tech industry has deep ties to the country’s military and intelligence apparatus, which uses Palestinians under military occupation as unwilling guinea pigs for systems that are then marketed to other countries.

It now appears that European governments are ready to embrace the fruit of this abusive and oppressive structure on the pretext of fighting the pandemic.

NSO Group’s Pegasus, which is only sold to governments, has been misused against journalists and human rights activists in dozens of countries. Suspected operators include Morocco, Mexico, the United Arab Emirates, Bahrain and Kazakhstan.

Pegasus has also been implicated in the killing of Jamal Khashoggi, the Saudi journalist lured to his country’s Istanbul consulate in 2018 and brutally murdered and dismembered.

Amnesty International, whose staff were targeted with NSO Group malware, is suing the company to stop its role in abusive surveillance.

Facebook is also suing NSO Group for allegedly compromising its WhatsApp messaging platform to help governments spy on some 1,400 people on four continents.

Now privacy and human rights experts are concerned that NSO Group is at the forefront of an Israeli-government sponsored coronavirus surveillance effort that could be adopted in other countries.

Israeli defense minister Naftali Bennett last month bragged that his ministry and the Israeli military had worked with NSO Group to develop a system to give Israelis a score for how likely they are to be infected with the new coronavirus.

According to Israeli business publication Globes, “the system will collect information about Israelis, update it in real time, and assign every Israeli an ‘infection rating’ on a scale of one to 10.”

Vice was given a look at the NSO Group technology.

The publication describes the system made by NSO Group, and a similar one developed by Italian firm Cy4Gate, as “essentially mass surveillance tools that would help governments and health authorities keep track of the movements of every citizen, and who they get in contact with.”

For this purpose, according to Vice, NSO Group has “adapted the user interface and analytical tool that they already had developed to be used alongside its powerful malware known as Pegasus, which can hack into mobile phones and extract data like photos, messages and phone calls from them.”

The new system, named Fleming, “lets analysts track where people go, who they meet, for how long, and where.”

Individuals are supposedly assigned random ID numbers to protect their privacy, but an NSO Group source told Vice that the government can de-anonymize the information “when needed.”

In effect, this is real-time tracking of every person.

“This is an extremely cynical attempt from a notorious spyware company to branch out into mass surveillance,” John Scott-Railton, a senior researcher at the University of Toronto’s Citizen Lab, told Vice.

Citizen Lab has played a crucial forensic role in exposing how NSO Group spyware has been misused around the world.

“Every citizen of the world wants to go back to normal as soon as possible. The gold rush to surveillance technology could easily mean that there is a normal expectation of privacy that we will have a hard time going back to,” Scott-Railton added.

As Vice notes, mobile phone carriers in countries including Italy, Germany, Austria, Spain, France, Belgium and the United Kingdom “are already sharing customers’ locations with their respective governments in an effort to track the spread of the virus.”

While there are no reports of these governments using NSO Group’s systems, there are troubling signs that the European Union and its members are looking to embrace Israeli mass surveillance technology under the cover of fighting COVID-19.

On Monday, the Dutch embassy in Tel Aviv tweeted that it was “Looking for Dutch companies that want to team up with an Israeli partner to apply for a unique tender for smart digital solutions for corona (like apps) by the Dutch Ministry of Health.”

And Emanuele Giaufret, the European Union’s ambassador in Tel Aviv, published an op-ed in The Jerusalem Post touting how the 27-member bloc is “harnessing its scientific and technological research to fight COVID-19,” an effort that includes “cooperative projects with Israel.”

According to Giaufret, the EU has earmarked about $150 million from its Horizon 2020 science program “to fund scientific teams across Europe as well as in partner countries, including Israel, to help find a vaccine to COVID-19 quickly.”

He adds that the aim of the effort “is to improve diagnostics, preparedness, clinical management and treatment.”

These activities are broad enough to include funding surveillance efforts, especially when Horizon 2020 has already been used in recent years to channel money to Elbit Systems, among other companies in Israel’s war industry.

The ever agile Elbit is currently marketing itself as a provider of technology to fight the pandemic.

Israeli defense minister Bennett has made clear that he wants to export the NSO Group’s coronavirus monitoring system.

And Sky News reported earlier this month that NSO Group has “reached out to a number of western countries to pitch them its coronavirus-tracking software.”

Israel’s mistreatment of Palestinians, including its own citizens, during the pandemic has followed the same pattern of racism, violence and neglect that are foundational to the state.

Palestinian laborers from the occupied West Bank have little choice but to work for Israeli employers if they are to feed their families.

While in Israel, they face exposure to the virus which they then risk bringing back to their own communities.

But Israel’s systematic disregard for the health and safety of Palestinians has not stopped it from forcing them to be experimental subjects for its control and surveillance technologies.

“Palestinians seeking to verify whether their permits to remain in Israel are still valid have been instructed by Israel to download an app that enables the military access to their cell phones,” the Tel Aviv newspaper Haaretz reported last week.

“The app would allow the army to track the Palestinians’ cell phone location, as well as access notifications they receive, files they download and save, and the device’s camera.”

Haaretz does not explain how such intrusive access has anything to do with fighting the virus, nor does it say who made this particular app.

But Israeli media have confirmed the Israeli army’s cyberwarfare arm Unit 8200 is involved in the NSO Group coronavirus tracking project.

In 2014, veterans of Unit 8200 revealed that “the Palestinian population under military rule is completely exposed to espionage and surveillance by Israeli intelligence.”

The Israeli agents confessed that the information they helped collect and store “harms innocent people.”

Now the rest of the world may get the Palestinian treatment.

“What happens in Palestine does not stay in Palestine,” the watchdog Who Profits notes on a new web page dedicated to monitoring how the COVID-19 crisis plays out in the context of Israeli occupation.

“A key reason Israel is continually looking to diversify its portfolio of repression is that it can later turn it outward for economic profit and political gains.”

The coronavirus pandemic provides the perfect opportunity for Israel to market its spying in just this manner.

And all indications are that the European Union – in keeping with its unbroken record of complicity – is ready to help Israel expand its surveillance to practically anyone on the planet.