We have the money to build a better society after this crisis. But corporations and the right are already undermining our welfare. 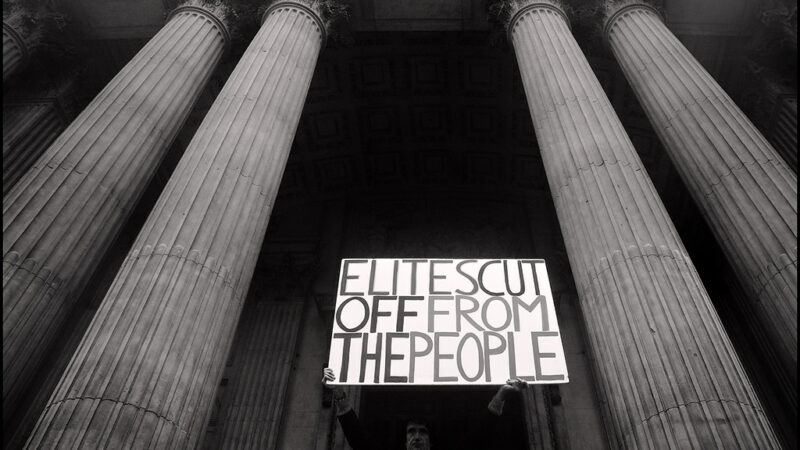 The coronavirus lockdown is easing and more businesses are reopening. But what kind of a society will the UK be?

The same question was asked after the 2007-08 banking crash, especially as the government (read: taxpayers) bailed out the banking industry. It provided guarantees and cash outlays of £1,162 billion to ailing banks. There was also quantitative easing, i.e. digitally-created money, of some £435bn.

The taxpayer-funded bailouts facilitated rise in the price of shares, bonds, property and financial assets – exacerbating inequalities. Rather than taxing the rich and financial speculation, the government punished normal people with never-ending austerity, wage freezes, cuts to the National Health Service (NHS), education, schools, policing and everything else. By 2019, the richest 10 per cent of households held 45 per cent of the total UK wealth and the bottom half just  9%.

We entered the coronavirus crisis with poor social infrastructure and deep inequalities and cannot go back to that ‘normal’. The crisis showed that the low-paid workers such as nurses, midwives, care workers, supermarket staff, teachers and bus and delivery drivers were the lifeline of society.

The government has given some financial help to employees and self-employed, but it isn’t about to embrace some new ideology. Neoliberals are determined not to let a crisis go to waste. There is already talk of further wage freezes for public sector workers. Think tanks like the Institute for Fiscal Studies have called for a cut to the minimum wage. The Social Market Foundation is urging the government to hit the state pension, already one of the lowest in the western world.

The government has given billions of pounds to businesses in the form of business rates holidays, wage subsidies, cheap loans and guarantees; all without any obligations to safeguard jobs. The absence of obligations has enabled corporations to declare war on workers. At British Airways (BA) thousands of employees have been told to sign news contracts, accept wage cuts of up to 60% or face redundancy. Nearly 12,000 jobs will vanish.

BA is not alone. Ryanair is imposing job cuts and wage cuts ranging from 10% to 20% with the threat that if employees resist they will be sacked. A wage cut of 10% has been imposed on workers at Daily Mirror, Daily Express and hundreds of local newspapers. Bam Construct has cut all employee salaries by 20%. P&O is cutting jobs and wages by 20%.

Paying for another crisis

Rather than checking the above practices, the government is facilitating them. On 3rd June the Corporate Insolvency and Governance Bill was rushed through the House of Commons, with minimal scrutiny.

The Bill enables all businesses, whether financially distressed or not, to voluntarily enter administration and restructure themselves by persuading creditors to accept less than the amounts they are owed. The business can shed pension obligations and wage bargaining agreements, fire and rehire staff on inferior terms. The big winners from this will be shareholders.

The government’s impulses must be checked.  We all know that reduction in wages will impose hardship on workers and their families as rents, rates, mortgage payments and price of food, water, gas, electricity and other essentials is not going to decline. Without good purchasing power, people will not be able to buy goods/services produced by businesses and economy will stall. Social instability will follow.

We have the money

The banking crash and coronavirus crisis has shown that the state can find resources and they are needed to build a new economy and society. It needs to redistribute income and wealth. It did so after the Second World War by creating the NHS and numerous other social services. It can do the same again by providing much needed public services, and embracing a green agenda. Worker rights need to be strengthened to end the spiral of wage cuts.

Even before the coronavirus crisis, the UK had a poor record of investment in productive assets. It invested around 16.9% of the gross domestic product in long-term productive assets and languished near the bottom of the EU member states’ investment table. Low wages and low investment were the main reasons for low productivity even though British workers put-in the longest hours in the EU. Without state investment, the UK will not be able to build a sustainable economy.

The new economy must work for everyone and not just shareholders and financial speculators. That requires democratisation of companies, with workers and consumers on boards so that a plurality of interests informs corporate decision-making.

The Conservative government – with it’s large parliamentary majority – is not in a mood to listen. But through debates in and outside parliament we can reposition people’s common sense and force the government to change its policies.

As you’re here, we have something to ask you. What we do here to deliver real news is more important than ever. But there’s a problem: we need readers like you to chip in to help us survive. We deliver progressive, independent media, that challenges the right’s hateful rhetoric. Together we can find the stories that get lost.

We’re not bankrolled by billionaire donors, but rely on readers chipping in whatever they can afford to protect our independence. What we do isn’t free, and we run on a shoestring. Can you help by chipping in as little as £1 a week to help us survive? Whatever you can donate, we’re so grateful – and we will ensure your money goes as far as possible to deliver hard-hitting news.

One thought on “UK: Elites will use this crisis to reshape the state. We have to push back”