Luis Arce and David Choquehuanca will be sworn in tomorrow as president and vice-president of Bolivia, just one year after the coup d’état. Incoming senator Leonardo Loza speaks about the year of repression, and the steadfast resistance to it 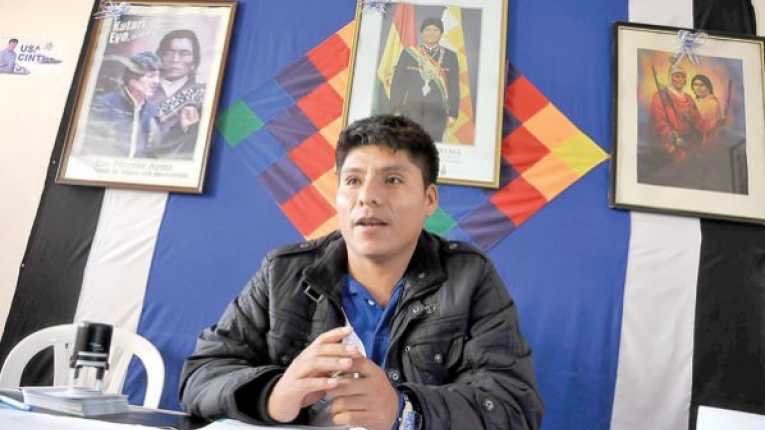 Leonardo Loza, a trade union leader from the Trópico of Cochabamba and incoming senator.

On Sunday, November 8, Luis Arce and David Choquehuanca of the Movement Towards Socialism – Political Instrument for People’s Sovereignty (MAS-IPSP) will be sworn in as the president and vice-president of Bolivia. This will mark an end to a tumultuous and painful chapter in the country’s history following the coup of November 2019. Arce and Choquehuanca were elected in a historic election on October 18 which saw over 88% participation of the electorate, and an overwhelming victory for the MAS-IPSP, which won over 55% of the vote share. While far-right groups have attempted to provoke confrontations and violence ahead of the swearing-in and have demanded an audit of the results, the majority of Bolivia is preparing to welcome the change.

Just one year ago, on November 10, 2019, Evo Morales and Álvaro García Linera announced their resignation following a campaign of threats, harassment, violence by right-wing groups, and finally a demand from the military that they step down. What followed was, “11 months of darkness, 11 months of tears, 11 months of pain, 11 months of anguish, 11 months of persecution, 11 months of human rights violations in Bolivia,” recalled Leonardo Loza. Loza is a trade union leader from the Trópico of Cochabamba, a coca growing region where former president Morales also hails from. In a conversation with Peoples Dispatch days after the October 18 elections, Loza pointed out that that in the Trópico, like other militant regions of Bolivia, “with our strength, our conviction and our force, we were able to put up with so much repression and intimidation from the Bolivian right during these 11 months.”

Leonardo Loza, who is the executive secretary of the Federation of Intercultural Communities of Chimoré and the former vice-president of the Six Federations of the Tropic of Cochabamba, will now take his place in the country’s Senate. He took the spot of Evo Morales in the candidacy for senator of Cochabamba in September after the Supreme Electoral Court disqualified the latter. The MAS-IPSP received 65% of the votes in Cochabamba, indicating the extent of support for both the presidential ticket and legislators like Loza.

Loza is one of three popular leaders from Cochabamba who will represent the MAS-IPSP in the Senate. Accompanying him will be  Andrónico Rodríguez, the current vice-president of the Six Federations of the Tropic of Cochabamba, and Patricia Arce, the former mayor of Vinto, who suffered a brutal fascistic attack during the coup d’état last year. The three were on the frontlines of the resistance to the coup, organizing mass mobilizations, strikes, road blockades and legal challenges, and for this, paid a heavy price.

Loza is currently facing 12 different legal cases against him in Bolivia and one in the Hague, initiated by members of the de facto regime. The charges range from sedition, terrorism, drug trafficking, armed uprising and others. He knows that the reason they brought these charges was purely political. None of these charges have any basis, he said. On October 22, one of the cases against him and Patricia Arce was dropped, and he expects more to follow.

“I believe that it should not be a crime to be a leader, to be the spokesperson of the people. This is why they have brought charges against me,” Loza said, adding, “one day I would speak, and the next day they would present a new case against me, but I never stayed silent.”

Loza, when addressing a crowd of trade unionists and MAS-IPSP militants in the Trópico days after the election, said that this resilience comes from his upbringing. As the son of a woman who was not allowed to go to school and receive formal education because she was Indigenous and poor, he imbibed dignity and the spirit of resistance from a very young age. Today, he “does not let his guard down, even as much as they try to humiliate me, persecute me, threaten me, and blackmail me.”

He also said that the support of the people, in response to all of these charges, has been vital. “My people have protected me, taken care of me and sheltered me until now.”

From Sunday, Loza and the incoming government will take on new challenges. The coup regime did not just persecute popular leaders and repress protests. During its 11 months in power, it pushed through a series of neoliberal measures, embezzled millions of dollars through corrupt schemes amid the pandemic, and paralyzed Bolivia’s national industries. The attacks on the national economy coupled, with the challenges imposed due to the pandemic, have had a catastrophic impact on Bolivia’s working class that has been pushed further into instability and informality. Economic recovery is going to be one of the key focus areas of the MAS-IPSP.

Loza has pledged that he will work not only for his department of Cochabamba, but for all Bolivian people to “resolve the social problems in Bolivia, so that no one is discriminated against. So that in Bolivia, extreme poverty is diminished, and that we all have basic services guaranteed, whether you live in the city or in the countryside, like a mobile phone, clean water, sewage and many other things.”

“During the next five years, we are going to build up this country that unfortunately has been destroyed in such little time by the Bolivian right,” he vowed.

Sunday will be a historic day for Bolivia and for the world. According to Loza, in the elections on October 18, “the fate of the most humble, poorest, most humiliated, most marginalized people, not only in the past year but historically, was at stake. But we, these same people, we have won.”

Three days after the swearing in, Evo Morales is set to arrive in Chimoré in the Trópico, where one year ago he boarded a plane to Mexico amid the escalation of violence and threats to him and his family. While Morales does not have an official post in the government, his presence and political guidance will be of great importance in the transition process.

One thought on “After “11 months of pain,” Bolivia returns to democracy”