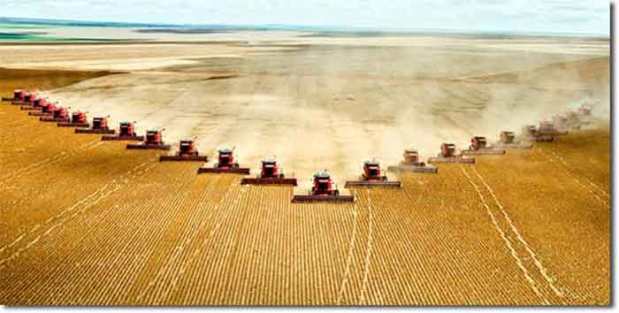 Firstly there is the increasing trend of land grab. This can be more clearly seen in the purchase and long-tem lease of land in Africa by companies, individuals or even governments of foreign countries. In just five countries during 2004-09 this amounted to 2.5 million hectares. But within various countries also corporate entities and rich individuals have been moving in quickly to grab at low rates the land of distressed small farmers who are facing increasing problems. Governments in many  countries have been handing over large tracts of land to corporate interests at very concessional rates for plantations or even crop cultivation, and they have been making changes in their laws to facilitate this. Some Indian states too have been changing land ceiling and other laws to facilitate this.

There should be  widespread national and world-level campaigns against all kinds of future land grab and for cancelling the most unjust ones. Land in the hands of actual cultivators must be emphasized,  while ownership of big tracts of land by outsider entities should be opposed.

On the other hand several big companies are not interested in accessing land directly, as they feel that an easier way of ensuring access to farm produce needed by them is through contract farming. The provisions of several contracts enable the companies to keep pushing their expensive inputs also on the farmers so that they benefit from both ends of getting reliable supply of exactly the kind of crop needed by them ( for example the barley variety grown for making beer may be different from the variety needed for nutritious food )at a reasonable price, retaining the authority of also rejecting a part of this crop on quality grounds, while at the same time earning also from imposing expensive seeds, inputs and technologies on farmers.

Another form of increasing corporate control is through various international  trade and financial organizations as well as trade treaties and other agreements. This should be resisted. In particular the rules of World Trade Organization should be changed in such a way that the interests of farmers are protected and unfair and unjust domination of corporate sector is avoided.  The trend to link  farming and food related restrictions to trade, including intellectual property rights in trade and imposing intellectual property rights in the context of even plants and life-forms should be reversed entirely. Trade should not be twisted and changed in such ways as to threaten  the farming and food sovereignty of communities and protection of basic food and sustainable livelihood rights. There should be a worldwide strong campaign for achieving this.

There should be strong resistance to the tendency of increasing concentration of seeds along with other important inputs in the hands of a few big multinational companies. In particular the concentration in the case of seeds should be avoided and there should be a complete ban on GM seeds and crops. At the same time grassroots efforts to protect biodiversity and to save, protect, revive and share diversity of traditional seeds should be encouraged in a very big and effective way.

Corporate domination has been helped greatly by securing scientific support in various unethical and unjust ways and by misusing crucial infrastructure like research institutes, agricultural universities and gene banks. Research efforts should be decentralized and there should be a mutual cooperation  of publicly supported scientists and experienced farmers to make available  self-reliant, low cost, very low external input, ecologically friendly, sustainable technologies which incorporate plenty of local traditional wisdom as well. There should be strong efforts for exposing and opposing unethical use of science to advance big business interests.

Corporate control in various forms seeks to break the self-reliance of farming communities which should be resisted. This process started in India in a big way about 55 years back with the agricultural green revolution and then its extension to various related activities. This led to rapidly increasing costs, loss of traditional seeds and wisdom, as well as colossal ecological ruin. Efforts should also be made by farming communities to regain the self-reliance we lost then. This is worth considering at a time when the opposition of farmers to new laws aimed at increasing corporatization of farming and food system in India is gathering strength.

Bharat Dogra is a journalist and author. His recent books include Planet in Peril and Man over Machine.