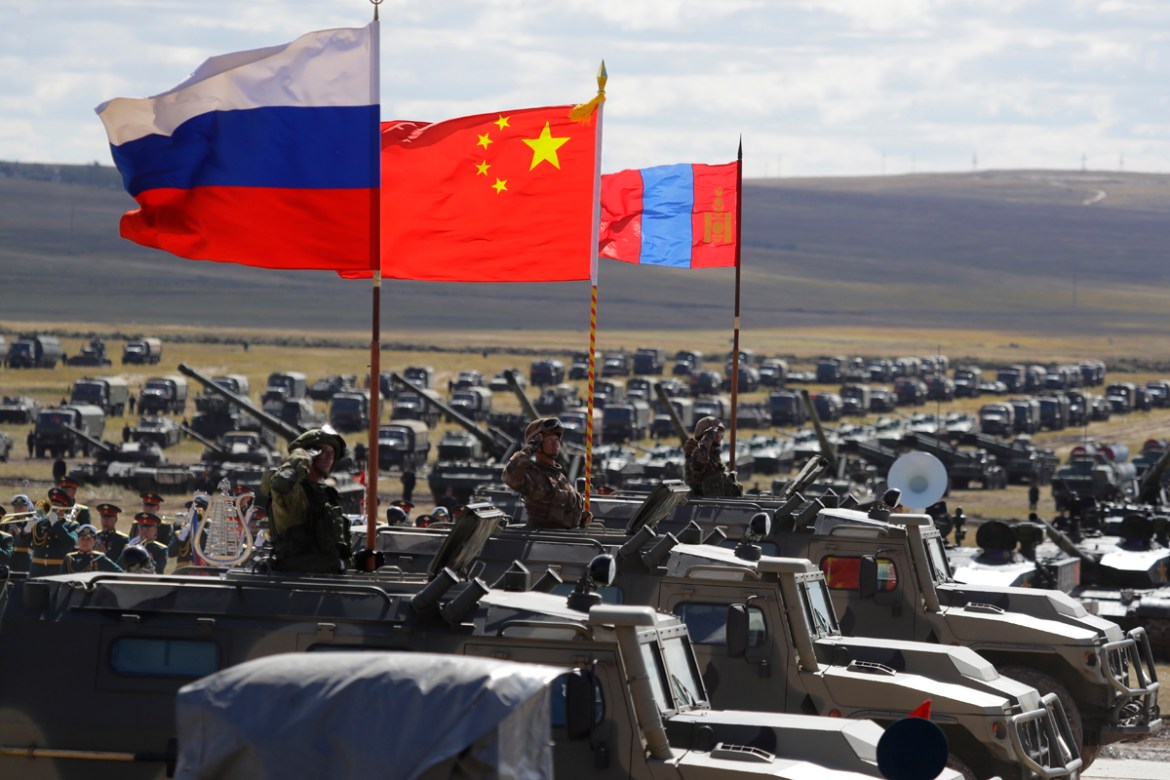 Vostok-2018 manoeuvres span vast expanses of Siberia and Asia-Pacific, the Arctic and the Pacific Ocean and showcase the military might of Russia and China

The center of gravity of the world economy and power has shifted back from the North Atlantic to Asia, the brief, supposedly unipolar moment of absolute and incontestable hegemony is over, and clear signs of this are represented by the re-emergence of Russia as a major player on the world stage, and the blossoming of China as the great superpower of the 21st century; in addition to the emergence of regional powers and political processes that are betting on sovereignty and self-determination without submitting to the vassalage or absolute domination of U.S. power, its allies, and the transnational powers of the global North or the collective West.

However, the elites behind the power are in a state of denial in the face of these structural changes in world history, and cling tooth and nail to the global hegemonic status; now that Biden is showing his true intentions, it is demonstrated that the aggressive US foreign policy was not the product of Trump’s megalomaniacal madness but a slightly different version of American exceptionalism and its determination to dominate the world.

In fact, the Biden administration goes further in aggressiveness in international relations, forces its vassal allies to align unconditionally within its guidelines, pushes states that have historically bet on geopolitical balance in their international relations to take sides definitively even against their national interests.

All of which forces the nations that are under attack and encircled by the measures of maximum U.S. pressure to begin to strengthen and formalize strategic alliances which, on the basis of economic integration, expand to cooperation in security and defense matters, thus constituting a common front of resistance that is increasingly clearer and more defined.

The pieces take a position on the world chessboard, on the one hand, the United States aligns under its command the forces of the “collective West”, which under the guise of the defense of the ill-named “free world” hides its intention of doing whatever is necessary to guarantee the continuity of the modern, colonial, capitalist, globalist and neoliberal world system. This side is controlled by the transnational elites that concentrate the world’s wealth in very few hands; a system formally ruled by the United States and its powerful industrial, military machinery.

The faithful and strong nucleus of this grouping of forces is represented by the Anglosphere, with the United States at the head, seconded by the United Kingdom, and followed by the subjects of Canada, Australia and New Zealand, grouped in the 5 eyes to spy on China; then there is the Zionist state of Israel, created specifically to serve these purposes in West Asia, along with the Persian Gulf monarchies conveniently aligned to the interests of their own elites; then there are the tributary vassals, losers of the second world war, or “rescued” after it with the Marshall plan.

Thus we have the Europeans conveniently grouped and subdued in NATO positioned against Russia, and on the other hand the defeated and occupied Japan, South Korea “protected” from the threat of the North, and China’s separatist Taiwan; India, traditionally not formally aligned with any of the major power blocs, is now included in the Quad, a naval military coalition created to contain China’s growing power, due to its historical differences with its increasingly powerful neighbor, China, and the pro-Western inclination of the current ruling party. In Latin America, Colombia and the other extreme right-wing governments grouped in the Lima group do the dirty work against the so-called rogue states of what the US considers its backyard according to its Monroe doctrine.

Faced with the obvious alignment of the chips on the US side: Anglosphere, Zionism, NATO, QUAD, seasoned with unilateral economic measures, unfair competition in the arms market (CAATSA), sabotage of strategic arms control, and media campaigns of discredit against those it considers its strategic adversaries, the latter while maintaining their sovereignty and self-determination, are beginning to draw closer and closer, and to formalize alliances and strategic integration processes, aimed not only at resisting and defending themselves but also at taking the initiative and confronting the multidimensional attacks of the US.

Recently China and Russia have tightened their economic and strategic cooperation and integration, taking steps to reduce their dependence on the dollar and improve China’s missile warning and defense capabilities with the support of the Russians; however, the ways in which this greater Russian/Chinese rapprochement will manifest itself remains to be seen, but it should not be forgotten that neither power rules out the idea of a formal military alliance for mutual defense, Lavrov’s very recent visit to China points in this direction.

A military alliance between their most powerful adversaries is a real nightmare for the United States and its allies because both powers could take advantage of their strengths to overcome their weaknesses; thus China’s impressive shipbuilding industry can overcome the weakness of the Russian surface fleet, and Russia’s superior nuclear capabilities can complement the strategic defenses of the Asian giant. For now, joint exercises and coordinated patrol flights between the two air forces in the Pacific have increased. Behind the US fear of this potential military alliance are two uncomfortable and indisputable truths: China is the only power capable of challenging US hegemony in the world economy, while Russia represents the only real threat to the very existence of the US as a state.

On the other hand, both Russia and China are increasing their cooperation and integration with Iran; the former has just signed a multimillionaire 25-year agreement that will allow the further development of the Islamic Republic and the secure supply of oil to the Asian giant; the Russians, for their part, have ratified their alliance with Syria and, by extension, in the entire West Asian region. Likewise, it is practically a fact that with the lifting of the arms embargo last October, both powers will become key suppliers for the strengthening of Iranian defense capabilities. We should not forget the strategic relations of the Chinese with Pakistan and North Korea, nor the renewed rapprochement between Russians and Belarusian.

It is true that it is not yet possible to speak concretely of a solid defense bloc positioned against the collective West, especially because none of these states would accept a vertical alliance under the absolute domination of one of the parties, in the style of the US relationship with its vassal allies, However, the suffocating pressure of the aggressive foreign policy of the United States that clings to its decadent hegemony could force a common front, not only economically and politically, but also militarily, placing humanity before the imminent risk of a confrontation with terrible consequences for all on a planetary scale.