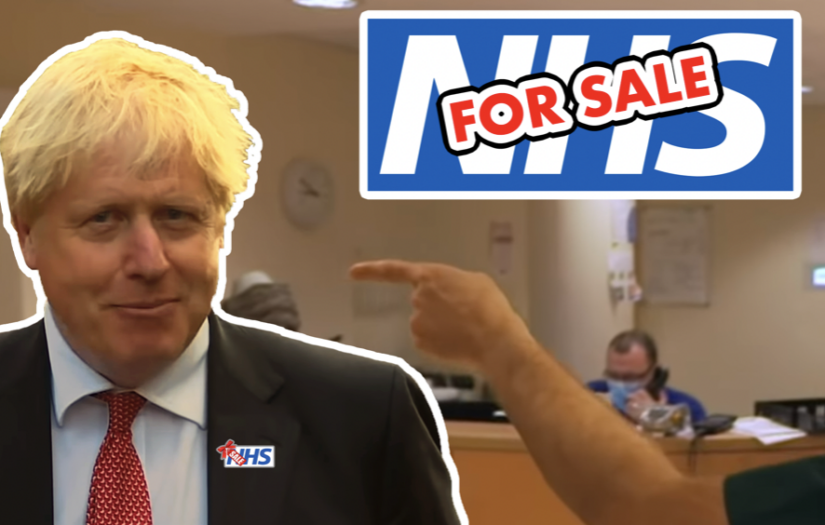 By TruePublica Editor: The mainstream media has remained silent with perhaps only The Guardian scratching the surface of what the government has planned for the NHS – by reporting that – “a new organisation is being set up with the aim of halting future pandemics.” It’s not as it seems though.

Matt Hancock said that the UK’s Health Security Agency (UKHSA) – “must plan, it must prevent and it must respond and be ready for the next pandemic.” But is the UKHSA really about tackling the threat of a new global pandemic?

In the House of Commons on 24 March, Boris Johnson told the nation that holding an inquiry into the handling of the covid-19 pandemic would be an “irresponsible diversion.”  However, it didn’t stop the government from announcing on the same day the imminent creation of UKHSA, a brand new organisation.

It was last August when the abolition of Public Health England (PHE), a civil service agency and part of the Department of Health and Social Care, was announced by the government. At that time, the government stated that PHE was to be replaced by the National Institute for Health Protection and promised a “local first approach” and close working with councils and their directors of public health and the NHS.

That was then but here we are and only six months later, these lies have already come to the surface.

When confirmation came of what the government really intended for the NHS, it was very low key indeed. So low, it merited nothing more than a two-page policy paper that makes clear that the new entity is to be part of the UK’s national infrastructure and security system. It also states that UKHSA will have a core function in driving economic growth as an integral part of what politicians term “UK plc.” In particular, it is envisaged as “acting as an engine” for the life sciences and diagnostics industry.

In brief, the government is to use privatisation of NHS healthcare as a method of driving a large part of economic activity – not outcomes of taxpayer driven public healthcare.

Since the Covid-19  crisis emerged, it has become clear that a critical weakness of the UK’s pandemic response has been the over-reliance on technological solutions to the detriment of proved public health interventions. A good example was the misleadingly named ‘NHS Test and Trace’ programme. The UK parliament’s Public Accounts Committee has been scathing of both the huge cost of this system, which was designed and operated by the private sector. Not only was a budget of £37bn put to this system – it effectively failed. By contrast, the NHS has been largely responsible for the vaccination rollout – that has been hugely successful.

An editorial in the internationally respected British Medical Journal published only last week gives some sort of insight of what the government has in mind (source).

“The emergence of a powerful medical-industrial complex was first described in the US in the 1960s. In the UK, the influence of this sector of the economy increased after 2010 as it took advantage of the contracting of core NHS services to the private sector. In its pandemic response, the government pivoted away from public health and NHS functions and organisations. Taking advantage of the emergency to dispense with normal tendering and contracting procedures, funding on a colossal scale was passed to the private sector. Similarly, in data analytics, the government has engaged state security organisations and the private sector to provide crucial information on covid-19. Against this background, it is likely that the creation of UKHSA will be seen by many as a further step in the growth of a centralised and secretive state apparatus with the close engagement of private sector interests.”

Make no mistake what the BMJ is saying. In the same commentary from the BMJ, the warning is made more clear – “the creation of UKHSA as a more powerful industrial and security-oriented replacement for PHE may not be welcome in the devolved administrations, particularly as the policy paper makes clear it will lead and co-ordinate across the UK and will operate on behalf of the UK internationally.”

The development of this powerful health security organisation under direct ministerial control will also be in keeping with the libertarian political view that promoting public health is nothing more than an act of the “nanny state.” Because privatisation of the NHS is not as widespread as they want, it is viewed (as it is in America) as an assault on the freedoms of business and individuals (to make a profit).

The BMJ concludes that – “Over the past decade, the local public health workforce, from school nurses to public health trainees and consultants, has been grossly under-resourced, and the directors of public health in England marginalised. The successful development and deployment of effective vaccines have taken time and, during that period, enormous damage has been done to the health of the population and the economy of the country. Although vaccines will undoubtedly help control the pandemic, a continuing and strengthened community based public health response to covid-19 at a local level is needed. A rushed and profoundly flawed restructuring of a large part of the public health system without consultation or discussion is an unhelpful and ideologically driven distraction.”

This time, there will be no ‘top-down’ reorganisation in the traditional sense for the NHS where numerous beancounters and consultants attempt to drive some sort of change that really doesn’t end with better outcomes. Instead, private interests will be driven through the heart of national healthcare policy with a profit motive – and it has disaster written all over it.

Take for instance, the newest advisor to Boris Johnson – an ex-employee of one of America’s biggest healthcare provider’s – Centene Corporation. As TruePublica has already reported, this company very quietly acquired 50 GP’s practices in North London with half a million patients on its books. Its criminality in America reads like the activities of some sort of state-backed mafia crime syndicate, which is staggering in its breadth. Hundreds of millions of dollars in fines for fraud, theft, consumer protection violations and false accounting, which barely scratches the surface of its very lengthy rap-sheet.

One of the most corrupt healthcare corporations in existence now has a seat at the top table in Downing Street. The same company is already one of the biggest providers of healthcare in the UK – and now it has a two-page policy document that gives the government a green light for an all-out assault on the NHS via privatisation.

This government is full of Boris Johnson’s acolytes after he purged the party of anyone who disagreed with his agenda. Lying and cheating has become the norm. Brexit is a case in point with the fisheries, fashion and financial services industries, along with Northern Ireland, which now simply represents collateral damage to its aims.

The government has no mandate from the general public for its actions when it comes to the NHS. Voters overwhelmingly want to see an end to privatisation in the health service after the coronavirus crisis has ended, according to a new survey.

The recent Survation poll found that 76 per cent of the public want to see the NHS “reinstated as a fully public service” – and want an end to privatisation. The Boris Johnson government has a different plan.

One thought on “NHS: ‘Centralised and secretive’ medical industrial complex being constructed”