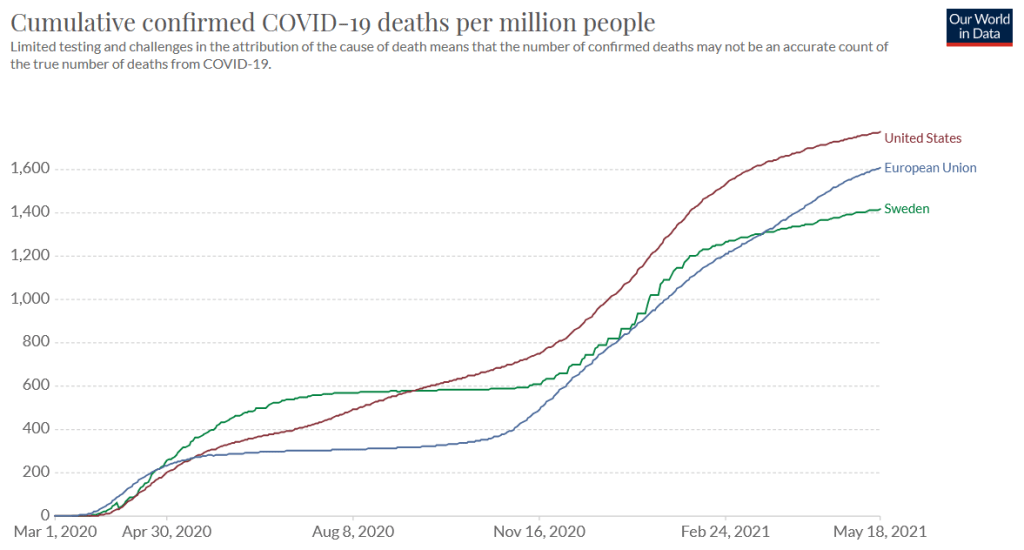 Cumulative covid deaths in Sweden, the EU, and the US (OWD)

The Swedish model in retrospect

The above chart shows that after more than one year into the pandemic, cumulative confirmed covid mortality in Sweden – without lockdown, mask mandate, and primary school closures – is significantly lower than the average in both the EU and the US. Within the US, the same applies to Florida, especially if adjusted for the mean age of the population. Indeed, a recent cross-country analysis found that neither lockdowns nor PCR testing rates had an impact on covid mortality.

The above chart alone basically invalidates the entire high-cost, low-benefit ‘Western approach’ to the coronavirus pandemic. For this very reason, those who have promoted this unscientific approach cannot show the big-picture mortality data. Instead, they compare Sweden only to its two neighbors, Norway and Finland, which have the lowest covid mortality among all Western non-island countries.

For this misdirection to work, one must conceal that Norway and Finland have had even softer measures than Sweden during most of the pandemic, and one must also conceal the true reason behind the outlier status of Norway and Finland: early border controls, opposed by the WHO and most Western ‘health experts’, for political reasons, until it was too late.

The fact that there are hardly any beneficial intermediate stages between the rather relaxed Swedish model and the extreme (but apparently effective) Chinese model very likely has to do with the dominant mode of transmission of Sars-CoV-2: aerosols (see next section). 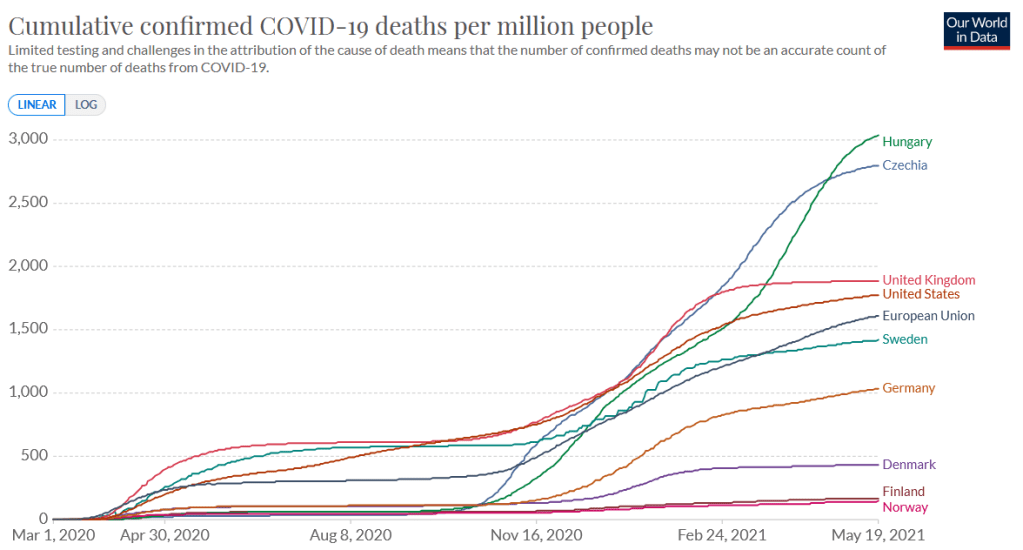 More than one year since the beginning of the pandemic, the WHO has finally acknowledged that aerosols are a primary mode of transmission of Sars-CoV-2. Leading aerosol researcher and professor at the University of Colorado, Jose-Luis Jimenez, argues that aerosol transmission may in fact account for 99% of Sars-CoV-2 transmission.

Aerosols as the dominant mode of transmission may well explain many noteworthy aspects of the covid pandemic, including:

The importance of aerosol transmission might even explain why a few East Asian countries (e.g. Japan and Vietnam) appear to have experienced a lower transmission rate, comparable to children in Western countries: due to genetic or metabolic factors (e.g. much lower obesity rates), they may have had far fewer ‘super-spreading’ individuals driving major outbreaks.

Video: “We have lost our minds” (Source: Second Opinion)

On May 14, the journal Science finally published a letter by several top scientists calling for a proper investigation of the coronavirus origins, including lab-related scenarios. Several legacy media outlets have also begun covering the issue in recent weeks.

Early in the pandemic, unscientific rumors of a ‘lab leak’ or even a ‘bioweapon’ were used to exaggerate the danger of the novel coronavirus and frighten the general population (the very mild 2009 ‘swine flu’ likely was a lab leak, too). In April 2020, Russian-Canadian geneticist Yuri Deigin wrote the first in-depth scientific analysis substantiating the plausibility of a lab-related origin.

In May 2020, the DRASTIC online research collaboration managed to link the closest known relative of Sars-CoV-2 to a 2012 covid-like pneumonia-incident in a Chinese mine, whose virus samples had been collected, stored and studied by the Wuhan Institute of Virology (WIV). Additional work by DRASTIC revealed several contradictions in claims made by scientists associated with the WIV.

Until recently, US and Western media avoided discussing the ‘lab hypothesis’, as US institutions, such as Anthony Fauci’s NIAID, were themselves involved in risky coronavirus research together with the WIV (which is why some researchers half-jokingly speak of covid as the “Fauci flu”), and discussing the topic might have helped the re-election of the former US president.

Based on currently available evidence, a lab-related origin appears more likely than a fully natural origin. Within the lab-related scenario, however, there are again two possibilities: an accidental lab leak (e.g. during legitimate vaccine-related research), or an intentional release. Indeed, already in June 2020, US virologist Bret Weinstein argued that if someone wanted to “make it look like” a lab leak, Wuhan would have been the place to release it to “hide their tracks”.

In the case of an accidental lab leak, the WIV might be the ‘prime suspect’. In the case of an intentional release, however, the folks who ran the 2001 US ‘anthrax letter’ bio-terrorism psyop might be the ‘prime suspects’. These are basically the same folks who ran the “Dark Winter” anthrax bioterror excercise in June 2001 and the “Event 201” coronavirus pandemic exercise in October 2019, and who might benefit the most from a global biometric “vaccine passport” ID scheme as well as framing China as global geopolitical threat and enemy.

While it would have been very easy for these folks to engineer a coronavirus that looks like a WIV lab leak – they had extensive access to WIV viral databases – predicting the course and casualties of a pandemic appears far more challenging (e.g. Bill Gates thought the virus could be stopped at 1% prevalence). Hence a ‘lab leak’ currently remains the simplest and most likely explanation.

A lab leak was also the likely cause of the two most recent (mild) pandemics – the 1977 ‘Russian flu’ and the 2009 ‘swine flu’ –  and has been documented at least four times with SARS-CoV-1.

Read more: On the origins of Sars-CoV-2 (updated) 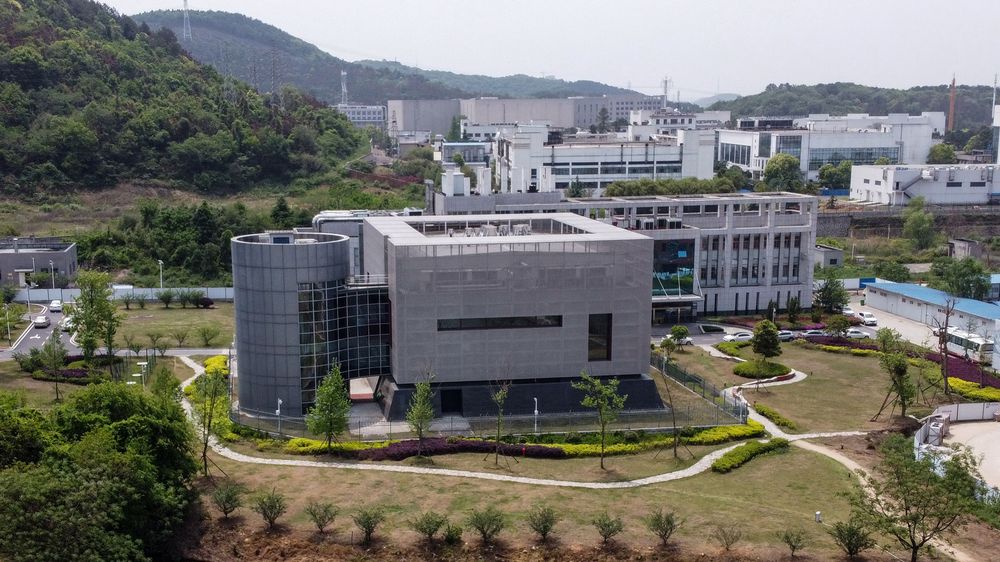 The Wuhan Institute of Virology

While confirmed covid deaths currently stand at about 3.3 million globally, the British Economist estimates that there were about 10 million excess deaths between January 2020 and April 2021. This figure is equivalent to a global excess mortality of about 12% (relative to 60 million global deaths per year) and includes direct and indirect deaths caused by the pandemic and the pandemic response (e.g. disruptions in labor markets, food supply and health care).

As the following map shows, the worst affected regions are Russia, Eastern Europe and parts of Latin America. While the median age of covid deaths in many European countries is above 80 years (and about 78 years in the US), this is not the case in places like Latin America, India and South Africa, where covid mortality has cut significantly deeper into society. 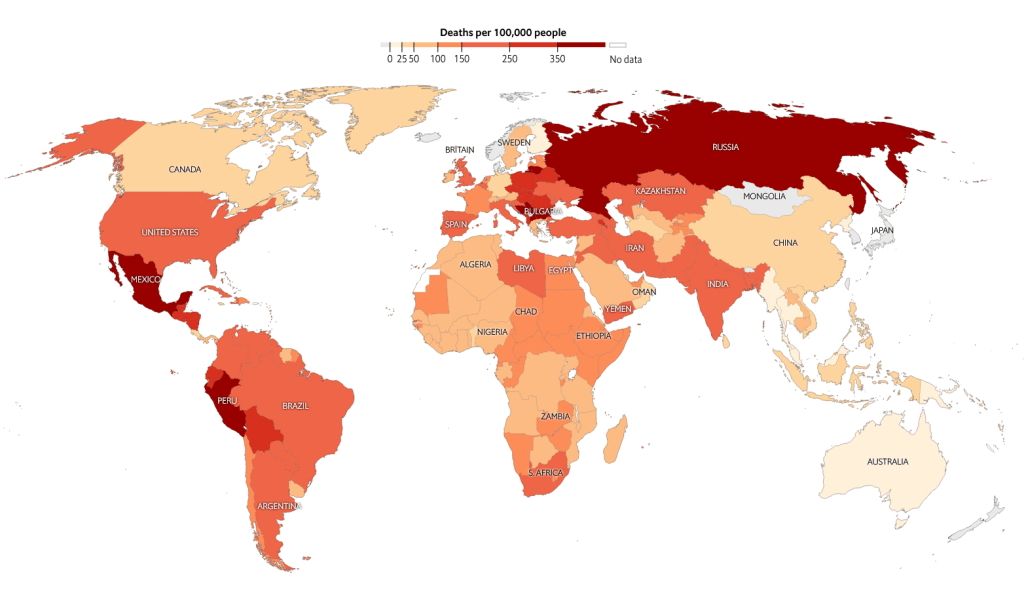 Note: Patients are asked to consult a doctor.

Late treatment of covid is very challenging because the viral replication phase is more or less over within about ten days after symptom onset, and patients, if they don’t recover at this stage, may enter the systemic, auto-immune and hyper-inflammatory phase of the disease, which may cause severe pulmonary, cardiovascular and neurological complications.

A recent German cross-country analysis found that “HCQ use is perhaps the most effective low-cost policy option for reducing fatalities” and could have saved up to 100,000 lives in the US alone. Moreover, after more than one year, a German government agency has finally acknowledged that supplementing vitamin D in high-risk groups might have been beneficial.

Several additional repurposed drugs are currently being investigated in small trials, including drugs targeting serotonin metabolism (e.g. fluvoxamine) or the TMPRSS2 co-receptor (e.g. camostat and anti-androgens). Given the risk of future vaccine escape coronavirus variants, early treatment options should still be a clinical and research priority.

Read more: On the treatment of covid-19 (updated) 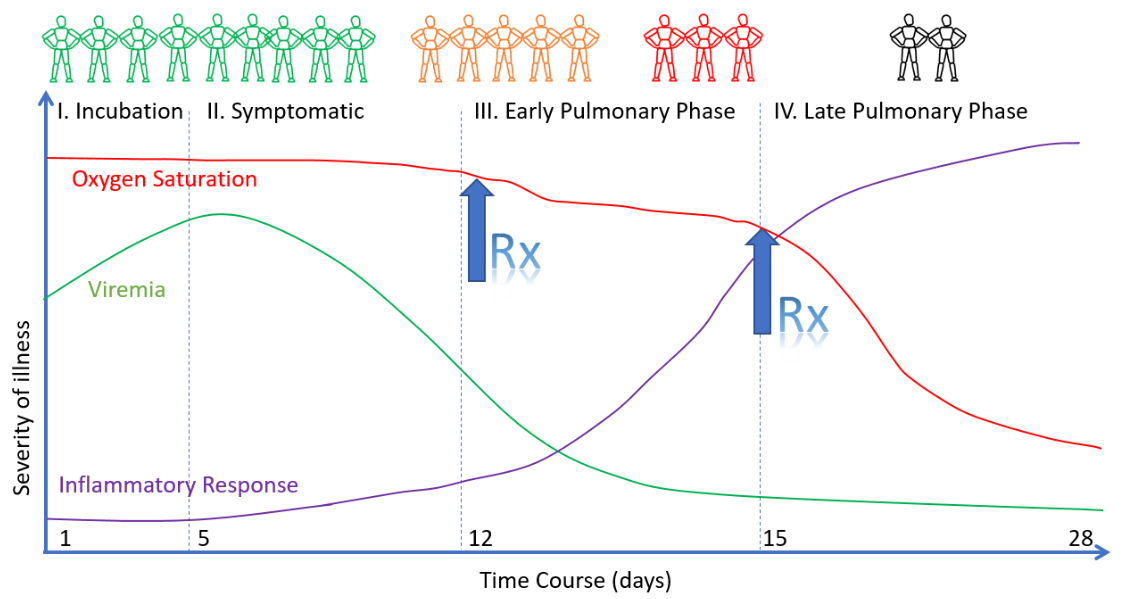 Among the many covid stories illustrating the incompetence and corruption of large parts of the ‘medical establishment’, the May/June 2020 Surgisphere scandal stands out: a fake company produced a fake study based on fake data (falsely claiming HCQ was dangerous), got it published as a peer-reviewed study in one of the ‘most prestigious’ medical journals (The Lancet), and managed to ‘fool’ the WHO and most Western ‘health authorities’ into stopping their trials.

The fraud was exposed not by any medical agency or university, but by a group of independent researchers coordinating their investigation on Twitter. To this day, it is not known if ‘Surgisphere’ was run by small-time science fraudsters or if they were a ‘big pharma’ front organization.

Similarly, the lab leak hypothesis and the WIV link to the Mojiang mine was established not by any official bodies or the media (which tried to cover it up), but by the decentralized, Twitter-based DRASTIC research collaboration. Finally, the hugely influential, but totally fraudulent, WHO-commissioned meta-study claiming an 80% effectiveness of face masks, also published by the Lancet, got debunked by the SPR Collaboration in September 2020.

Based on the currently available data and real-world evidence, one can say that covid vaccines achieve a good (60%) to very good (90%) short-term protective effect (mRNA vaccines being about as good as a natural infection), but their safety record does not meet the highest medical standards, having already been associated with thousands of deaths and tens of thousands of severe injuries and permanent disabilities, even in young people at low risk of severe covid.

The challenge is not to develop a reasonably effective covid vaccine – a German doctor managed to develop and produce one at home – but to ensure its safety.

Several adenovector-based vaccines have already been halted in several countries due to fatal cardiovascular adverse events (i.e. ‘risks outweighing the benefit’). Very little is currently known about the long-term safety and effectiveness of covid vaccines as well as about their safety in children. Furthermore, covid vaccines are used as a justification for the roll-out of “vaccine passports”, which in turn may serve as basis for a global digital biometric ID system.

The luckiest aspect of the covid pandemic

The luckiest aspect of the covid pandemic may have been the fact that covid generally remains very mild in children (and young adults). If covid had endangered 8-year-olds the way it endangers 80-year-olds, the pandemic might have been a truly major tragedy.