Tuesday, 1 February 2022 — World Beyond Beyond War 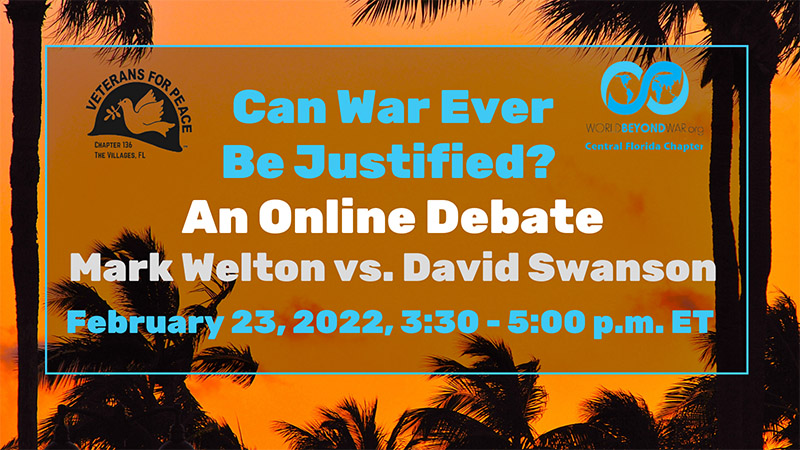 This free, public webinar will feature a live debate between Mark Welton and David Swanson on the question “Can War Ever Be Justified?”

Dr. Mark Welton is Professor Emeritus at the United States Military Academy at West Point. He is an expert in International and Comparative (U.S., European, and Islamic) Law, Jurisprudence and Legal Theory, and Constitutional Law. He has authored chapters and articles on Islamic law, European Union law, international law, and the rule of law. He was Past Deputy Legal Advisor, United States European Command; Chief, International Law Division, U.S. Army Europe.

David Swanson is an author, activist, journalist, and radio host. He is a Co-Founder and Executive Director of World BEYOND War and campaign coordinator for RootsAction.org. Swanson’s books include Leaving WWII Behind, Twenty Dictators Currently Supported by the U.S., War Is A Lie and When the World Outlawed War. He blogs at DavidSwanson.org and WarIsACrime.org. He hosts Talk World Radio. He is a Nobel Peace Prize Nominee and was awarded the 2018 Peace Prize by the U.S. Peace Memorial Foundation.

This debate is co-sponsored by World BEYOND War Central Florida and Veterans For Peace Chapter 136 The Villages, FL.

Register and get the Zoom link for the webinar!

Other future events are here.

Videos of past webinars are here.

World BEYOND War is a global network of volunteers, chapters, and affiliated organizations advocating for the abolition of the institution of war.

One thought on “Online Debate: Can War Ever Be Justified? Mark Welton vs. David Swanson”