In response to Russia’s demand for security guarantees, especially to its request to remove foreign NATO forces from the territory of East European countries, the U.S. and Britain are moving more forces to the east:

President Joe Biden has formally approved additional US military deployments to Eastern Europe, the Pentagon announced Wednesday, with US troops deploying soon to Poland, Germany and Romania.
…
Pentagon press secretary John Kirby said the deployments include roughly 2,000 troops from the United States to Poland and Germany in the coming days. In addition, approximately 1,000 troops currently based in Germany are being deployed to Romania.
…
Kirby said that the troops being deployed are separate and in addition to the 8,500 US troops that were placed on heightened alert last week that could be moved to Europe to support NATO’s response force if it’s activated.

The troops will operate on a bilateral basis with their host countries, since NATO has not yet activated a multinational response force.

This is a rather token amount of forces in the wrong places and with little combat value but it is serious in its symbolic character.

It was the U.S. that launched the ‘Russia’s imminent invasion of Ukraine’ propaganda campaign. On October 30 2021 the Washington Post published the first stenographed piece on it:

A renewed buildup of Russian troops near the Ukrainian border has raised concern among some officials in the United States and Europe who are tracking what they consider irregular movements of equipment and personnel on Russia’s western flank.

The officials, who spoke on the condition of anonymity because they weren’t authorized to discuss the matter publicly, said the troop movements have reignited concerns that arose in April, when the largest buildup of troops by Russia near the Ukrainian border in years sparked an international outcry.

The March/April build-up of Russian troops had come after Kiev had deployed more forces towards its rebel held Donbas area and had made public statements about regaining it by force. The Russian show of force was sufficient to cool Kiev down and soon the troops on both sides went back to their barracks.

By fall Russia was moving only a few troops from and to regular exercises in a normal manner. There was no surge activity. So why was the U.S. screaming alarm and continues to do so?

This information operation must be seen in the larger context of China’s rise, Russia’s resurgence and the loss of U.S. supremacy.

The situational logic of the emerging international constellation of forces pointed to two possible American strategies. The most obvious would aim at preventing the solidification of an alliance between Russia and China. Together, they represent a formidable bloc now capable of challenging the U.S.-led Western bloc in just about every sphere.
…
The alternative strategy was to ratchet up pressure on Russia so as to nip in the bud Putin/Moscow’s aspiration to become once again a major player – one dedicated to denying the United States its privileges as global hegemon and sole master of Europe. The driving force came from the ardent Victoria Nuland and her neo-Con comrades ensconced in the power agencies, in Congress and in the MSM. Since Anthony Blinken and Jake Sullivan were themselves partisans of this confrontational strategy, the outcome of whatever modicum of debate occurred was preordained.

Nuland and Blinken have ancestral roots in east Europe. To them Russia is evil. But there is more to this. These people would like to see Russia balkanized into many small parts.

In Robert Gates’s memoir “Duty,” he describes how at the end of the Cold War, Dick Cheney—then secretary of defense—wanted to dismantle not just the Soviet Union but Russia itself. No one in the US knows or cares about this, but I bet lots of people in the Russian government do. 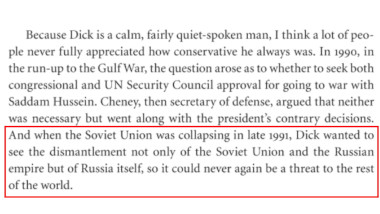 From 2003 to 2005, Nuland served as the principal deputy foreign policy adviser to Vice President Dick Cheney.

Cheney and Nuland have the same nefarious neo-conservative mindset.

Back to the non-action around the Ukraine as analyzed by Michael Brenner:

The events of April kicked-off the turbulent maelstrom that we’ve experienced to this day. What scenario did the Biden people want to see unfold? Any attempt at an answer must take account of the cardinal fact that nobody in official Washington cared very much what it meant for the stability of Ukraine or the welfare of the Ukrainian people. Their eyes were fixed on Russia. Their objective was to create a reason for imposing a crippling load of economic sanctions that would put paid to Putin’s supposed ambitions in Europe – and beyond. At least, that would free the West to devote its full energies to dealing with China. Ideally, it would return Moscow into a beggared facsimile of the pliable Yeltsin model or an innocuous neo-liberal satrap.

Everything the United States has done vis a vis Ukraine over the past year has been dictated by that overarching goal.

They set about manufacturing a scenario that would enable them to reach that end. The key would be some Russian counter-action to a Ukrainian provocation, of uncertain magnitude, that could serve as a casus belli for the draconian sanctions and for gaining the full cooperation of its allies. The unexpectedly forceful, unaccommodating response from Moscow threw a monkey-wrench into the plan, but did not alter the course Washington was committed to.
…
[T]he Biden people went all-out to convince the continental Europeans that they should sign onto a package of severe economic sanctions that would be triggered with near automaticity were the Russians to do something egregious. They assumed that Washington would make the judgment as what constituted an egregious action.

German, France and Italy inter alia refused to go along with this trip-wire strategy. They don’t trust Washington, they don’t want a confrontation with Putin, and they dread the disruptive impact on their own countries of sanctions (with evident domestic political consequences). Germany’s reluctance to line up obediently behind Washington was especially frustrating.
…
To make their case to Germany, France and like-minded allies, Biden, Blinken et al began in October to stoke the war fever with dire predictions of an ‘imminent’ Russian invasion. They conjured a “lightening strike,” – i.e. the sort of ‘cold start’, straight to the Channel, that agitated NATO planners back in the Cold War days. Bad metaphors never die, they just await the next paranoid episode.

Washington was thrown off stride when Moscow refused to play the role assigned to it. They said and did nothing to substantiate the claim. The Russo-phobia had taken on a life of its own that left the White House painted into a corner. The level of desperation was evinced by the CIA Director William Burns’ tour of European capitals with a briefcase filled with CIA generated ‘infallible’ evidence that an invasion was in the offing – and that, therefore, the Europeans immediately should commit to the trip-wire sanctions so as to deter the in fact fantastical invasion. The hottest material were satellite photographs purporting to show Russian armored units in battle formations “at the Ukrainian border” (just 180 miles away). We now know that the photographs were doctored. The tanks and other equipment were at their permanent bases adjacent to barracks and other fixed facilities. The CIA’s pictures had been cropped. The CIA, the White House and attendant Washington agencies were trying to palm off fraudulent goods whose sophistication was worthy of a 5th-grader.

That is the state we are still in. The U.S. is screaming for war and increasing the chance for it in the hope to get Russia to do something that justifies ‘crushing new sanctions’.

But in mid December Russia started to counter the U.S. move. It published two draft treaties, one with the U.S. and one with NATO, that included stringent security demands:

The responses were received but, following a U.S. request, Russia refrained from publishing them. They were leaked to El Pais, published today and can be downloaded here (pdf).

The U.S. response to Russia’s draft treaties is professional. While it rejects Russia’s main demands, especially a neutral status for the Ukraine, it concedes on minor issues and offers additional talks on them. The NATO response is in contrast highly ideological and rejects all of Russia’s points while making new demands towards Russia which are designed to be rejected. (Future negotiations are now likely to exclude NATO.)

Russia has yet to officially respond to the received letters. During a news conference after talks with the Prime Minister of Hungary the Russian President remarked on the letters:

[W]hile ignoring our concerns, the United States and NATO are referring to the right of states to freely choose specific methods to ensure their security. But this is not only about providing someone with the right to freely choose methods to ensure their security. This is only one part of the well-known indivisible security formula. The second inalienable part implies that it is impossible to strengthen anyone’s security at the expense of other states’ security.

Russia’s Foreign Ministry has send a letter to several NATO countries in which it requests their official opinions on several agreements they have signed which include clauses on the indivisibility of security:

How is the signing of those treaties and indivisible security for all compatible with the aggressive NATO expansion aimed at Russia? ‘Western’ foreign ministries will find it difficult to answer that question.

The U.S. strategy to ‘fix’ Russia in Europe by imposing ‘crushing sanctions’ on it to then attack China is failing. That is because it was completely misconceived.

Russia is the most autarkic country in the world. It produces nearly everything it needs and has highly desirable products that are in global demand and are especially needed in Europe. Russia also has huge financial reserves. A sanctions strategy against Russia can not work.

To use the Ukraine to gaud Russia into some aggression to then apply sanctions was likewise a rather lunatic attempt. There is nothing in the Ukraine that would tempt Russia to invade. Everything that may have do be done in the Ukraine can be done from Russian territory by Russian missiles or its air force and navy.

Instead of splitting Russia from China the U.S. has unintentionally done its best to push them into a deeper alliance. It was the most severe strategic error the U.S. could make.

Instead of a taking a new strategic posture that would support a pivot to Asia strategy the U.S. is now moving troops back to Europe.

The narrow-minded bigotry of U.S. decision makers, fed by believe in U.S. exceptionalism while lacking any conception of real power, has led to this defeat.

—
Adding: I consider this to be the White House’s acknowledgment of its strategic failure.

The White House says it’s no longer using the word “imminent” to describe the potential for a Russian invasion of Ukraine. It was sending an unintended message, Jen Psaki says.

‘Unintended imminence’? These people are clowns and bad at it.